Mankind Created a "Rainforest Crisis" in Central Africa 2,600 Years Ago

Fields, streets and cities, but also forests planted in rank and file, and dead straight rivers: humans shape nature to better suit their purposes, and not only since the onset of industrialization. Such influences are well documented in the Amazonian rainforest.

On the other hand, the influence of humans was debated in Central Africa where major interventions seem to have occurred there 2,600 years ago: Potsdam geoscientist Yannick Garcin and his team have published a report on their findings in the journal PNAS. The research team examined lake sediments in southern Cameroon to solve the riddle of the "rainforest crisis." They found that the drastic transformation of the rainforest ecosystem at this time wasn't a result of climatic change, it was mankind.

More than 20 years ago, the analysis of lake sediments from Lake Barombi in southern Cameroon showed that older sediment layers mainly contained tree pollen reflecting a dense forested environment. In contrast, the newer sediments contained a significant proportion of savannah pollen: the dense primitive forest quickly transformed into savannahs around 2,600 years ago, followed by an equally abrupt recovery of the forest approximately 600 years later. For a long time, the most probable cause of this sudden change, dubbed the "rainforest crisis", was thought to be climate change brought about by a decrease in precipitation amount and increase in precipitation seasonality. Despite some controversy, the origin of the rainforest crisis was thought to be settled.

High volumes of precipitation in the region (over 3,000 mm annually) have ensured that the lake has not dried out over the millenia. This heavy rainfall has created large volumes of sediment, which are then washed into the lake. These circumstances make it possible to perform sediment analyses with the utmost precision. 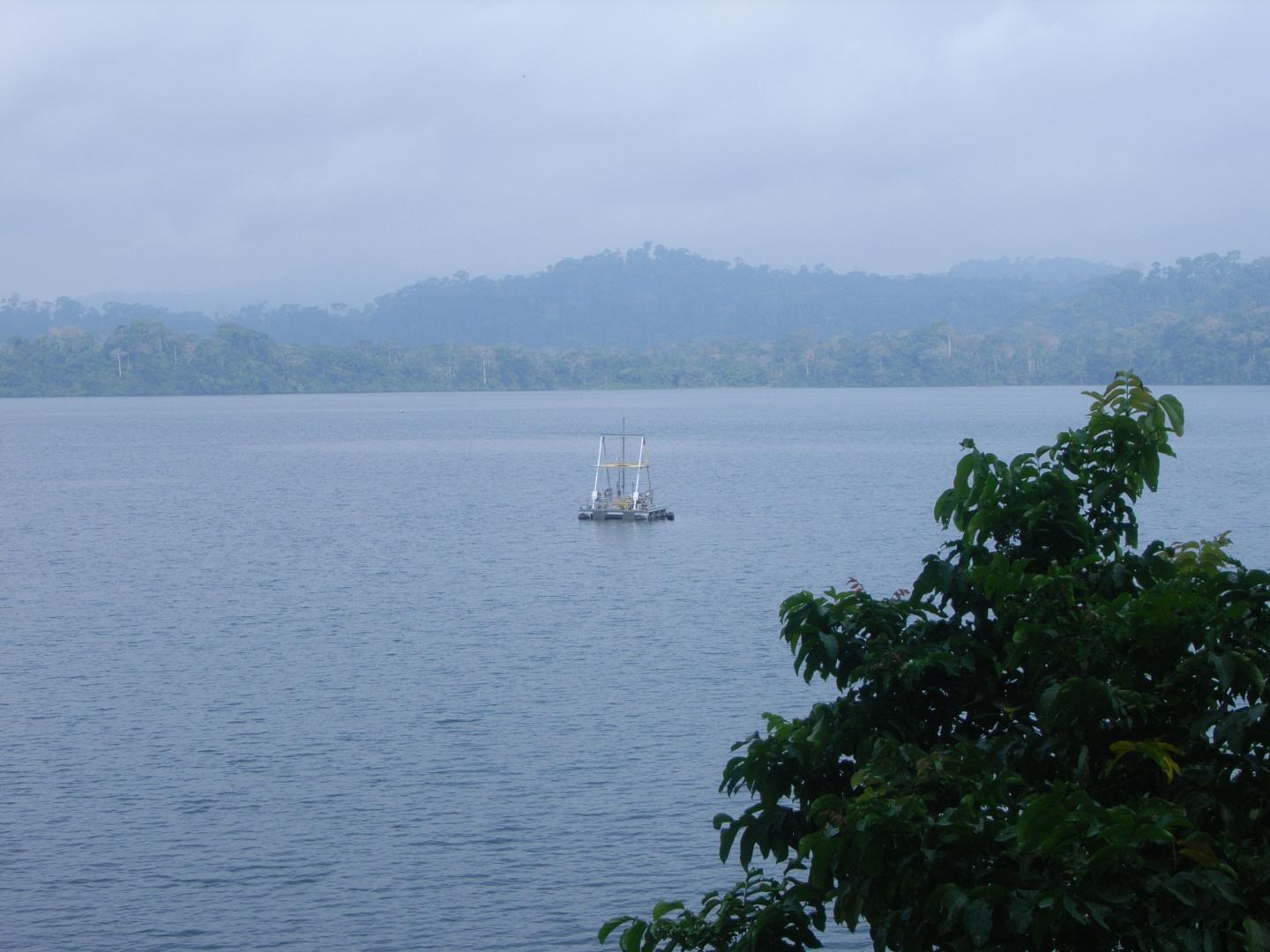 Yet Garcin, a postdoctoral researcher at the University of Potsdam, and his international team of scientists from UP, CEREGE, IRD, ENS Lyon, GFZ, MARUM, AMU, AWI, and from Cameroon suspected that other causes could have led to the ecosystem's transformation. By reconstructing both vegetation and climate change independently - through stable isotope analysis of plant waxes, molecular fossils preserved in the sediment - the team confirmed that there was a large change in vegetation during the rainforest crisis, but indicated that this was not accompanied by a change in precipitation. "The rainforest crisis is proven, but it cannot be explained by a climate change," says Garcin.

"In fact, in over 460 archaeological finds in the region, we have found indications that humans triggered these changes in the ecosystem." Archaeological remains older than 3,000 years are rare in Central Africa. Around 2,600 years ago, coincident with the rainforest crisis, the number of sites increased significantly, suggesting a rapid human population growth - probably related to the expansion of the Bantu-speaking peoples in Central Africa. This period also saw the emergence of pearl millet cultivation, oil palm use, and iron metallurgy in the region.

This floating platform can be completely taken apart and transported overseas. The platform enabled the collection of sediment samples in the approximately 100-meter-deep Lake Barombi, which were then analyzed in the laboratory. 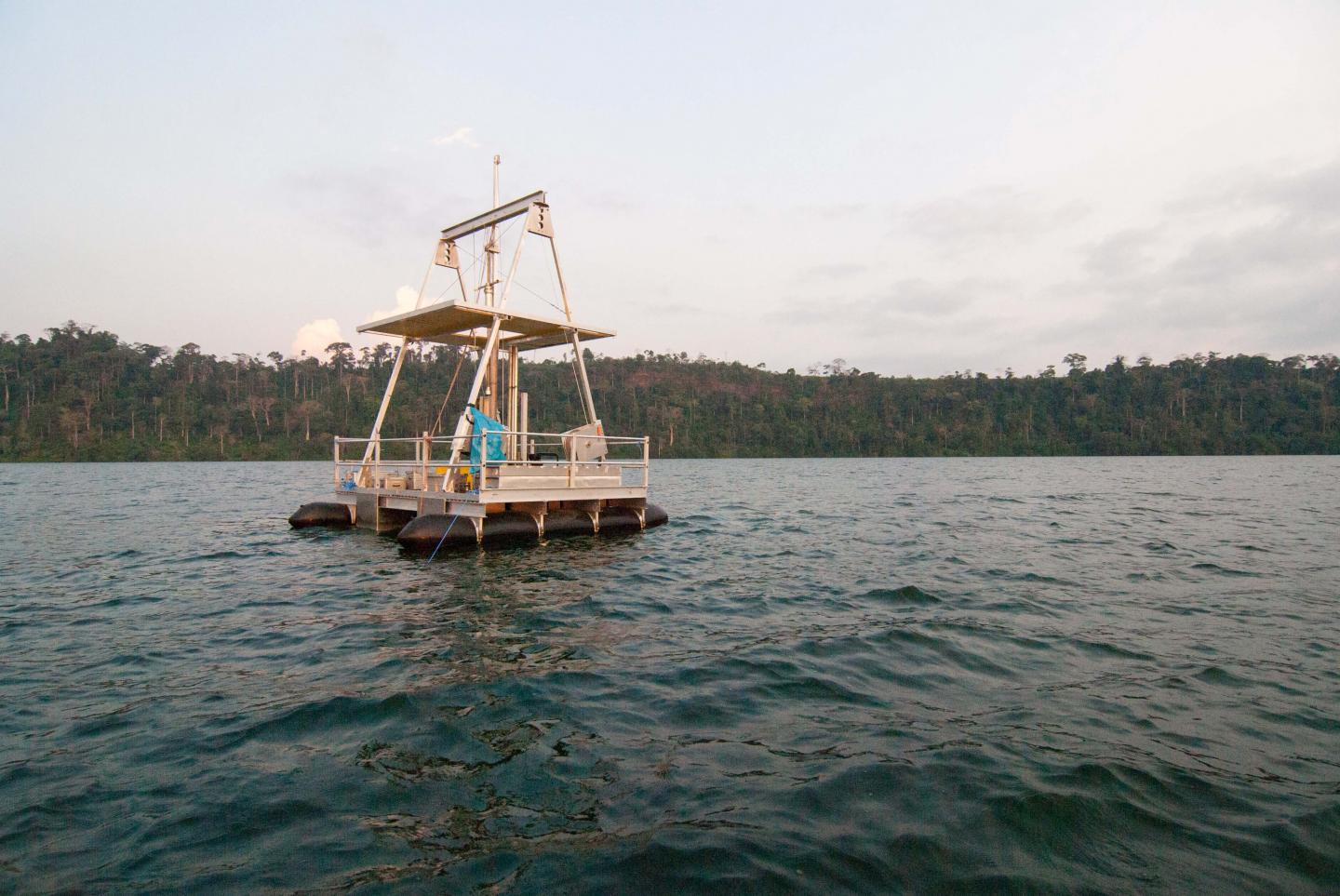 "The combination of regional archaeological data and our results from the sediments of Lake Barombi shows convincingly that humans strongly impacted the tropical forests of Central Africa thousands of years ago, and left detectable anthropogenic footprints in geological archives," says Dirk Sachse at the Helmholtz Center Potsdam - Research Center for Geosciences (GFZ). Sachse was one of the major contributors to the development of the method for analyzing plant wax molecular fossils (termed biomarkers).

"We are therefore convinced that it was not climate change that caused the rainforest crisis 2,600 years ago, but it was the growing populations that settled in the region and needed to clear the forest for exploiting arable land," says Garcin. "We are currently observing a similar process underway in many parts of Africa, South America, and Asia." But the work of Garcin and his team also shows that nature has powerful regenerative abilities. When anthropogenic pressure decreased 2,000 years ago forest ecosystems reconstituted, but not necessarily as before: as in the Amazonian rainforest, field studies show that the presence of certain species is very often related to past human activity.