Laser Wirelessly Charges a Smartphone Safely Across a Room

Although mobile devices such as tablets and smartphones let us communicate, work and access information wirelessly, their batteries must still be charged by plugging them in to an outlet. But engineers at the University of Washington have for the first time developed a method to safely charge a smartphone wirelessly using a laser.

As the team reports in a paper published online in December in the Proceedings of the Association for Computing Machinery on Interactive, Mobile, Wearable & Ubiquitous Technologies, a narrow, invisible beam from a laser emitter can deliver charge to a smartphone sitting across a room - and can potentially charge a smartphone as quickly as a standard USB cable. To accomplish this, the team mounted a thin power cell to the back of a smartphone, which charges the smartphone using power from the laser. In addition, the team custom-designed safety features - including a metal, flat-plate heatsink on the smartphone to dissipate excess heat from the laser, as well as a reflector-based mechanism to shut off the laser if a person tries to move in the charging beam's path.

The wireless charging system created by University of Washington engineers. The charging laser and guard lasers are normally invisible to the human eye, but red beams have been inserted in place of the guard beams for demonstration purposes. 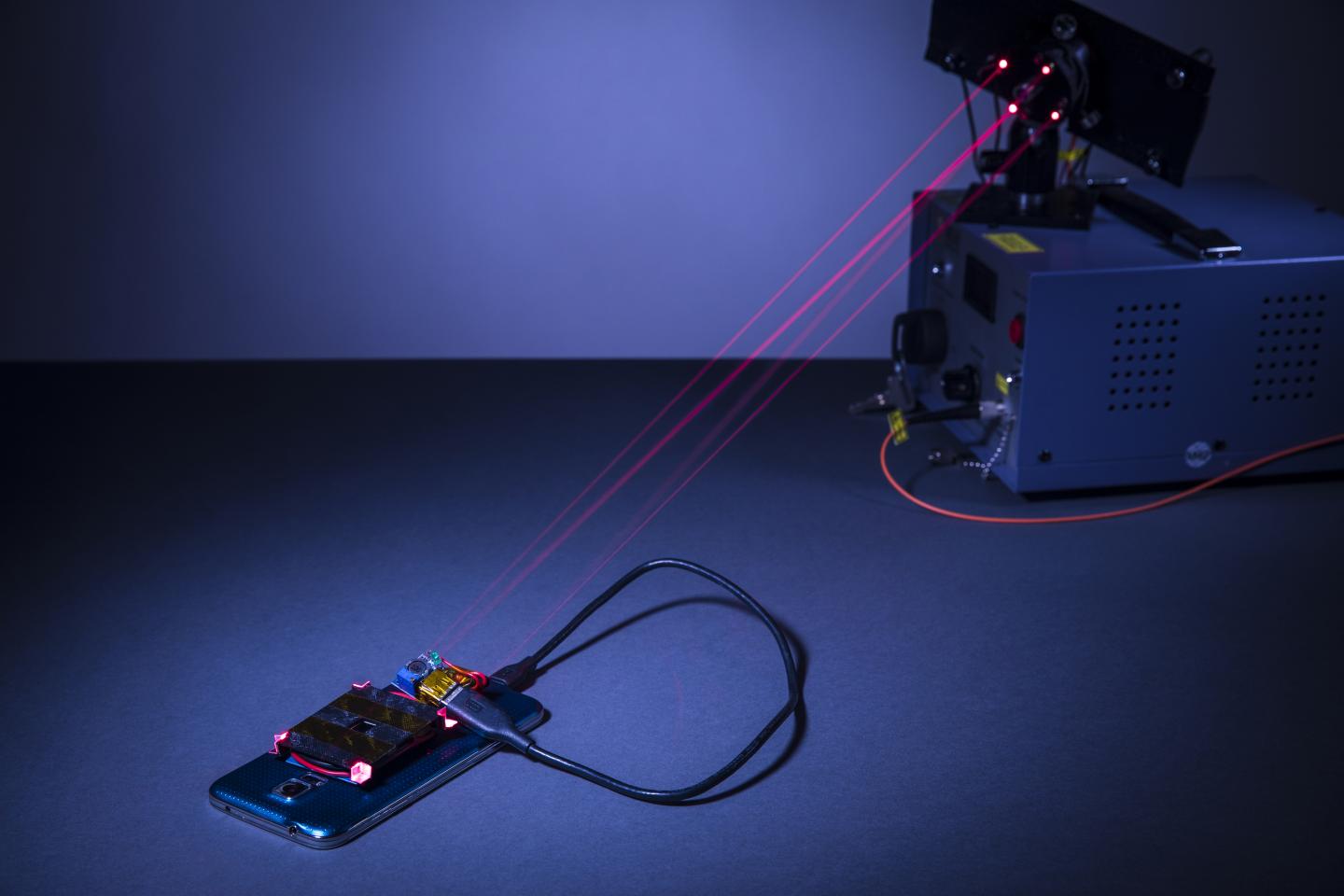 "Safety was our focus in designing this system," said co-author Shyam Gollakota, an associate professor in the UW's Paul G. Allen School of Computer Science & Engineering. "We have designed, constructed and tested this laser-based charging system with a rapid-response safety mechanism, which ensures that the laser emitter will terminate the charging beam before a person comes into the path of the laser."

Gollakota and co-author Arka Majumdar, a UW assistant professor of physics and electrical engineering, led the team that designed this wireless charging system and its safety features.

"In addition to the safety mechanism that quickly terminates the charging beam, our platform includes a heatsink to dissipate excess heat generated by the charging beam," said Majumdar. "These features give our wireless charging system the robust safety standards needed to apply it to a variety of commercial and home settings."

The charging beam is generated by a laser emitter that the team configured to produce a focused beam in the near-infrared spectrum. The safety system that shuts off the charging beam centers on low-power, harmless laser "guard beams," which are emitted by another laser source co-located with the charging laser-beam and physically "surround" the charging beam.

Illuminated in red is one of the 3-D printed retroreflectors, which reflects the low-power guard beams to diodes on the laser emitter. Interruption of the guard beams triggers a safety system which blocks the charging beam. 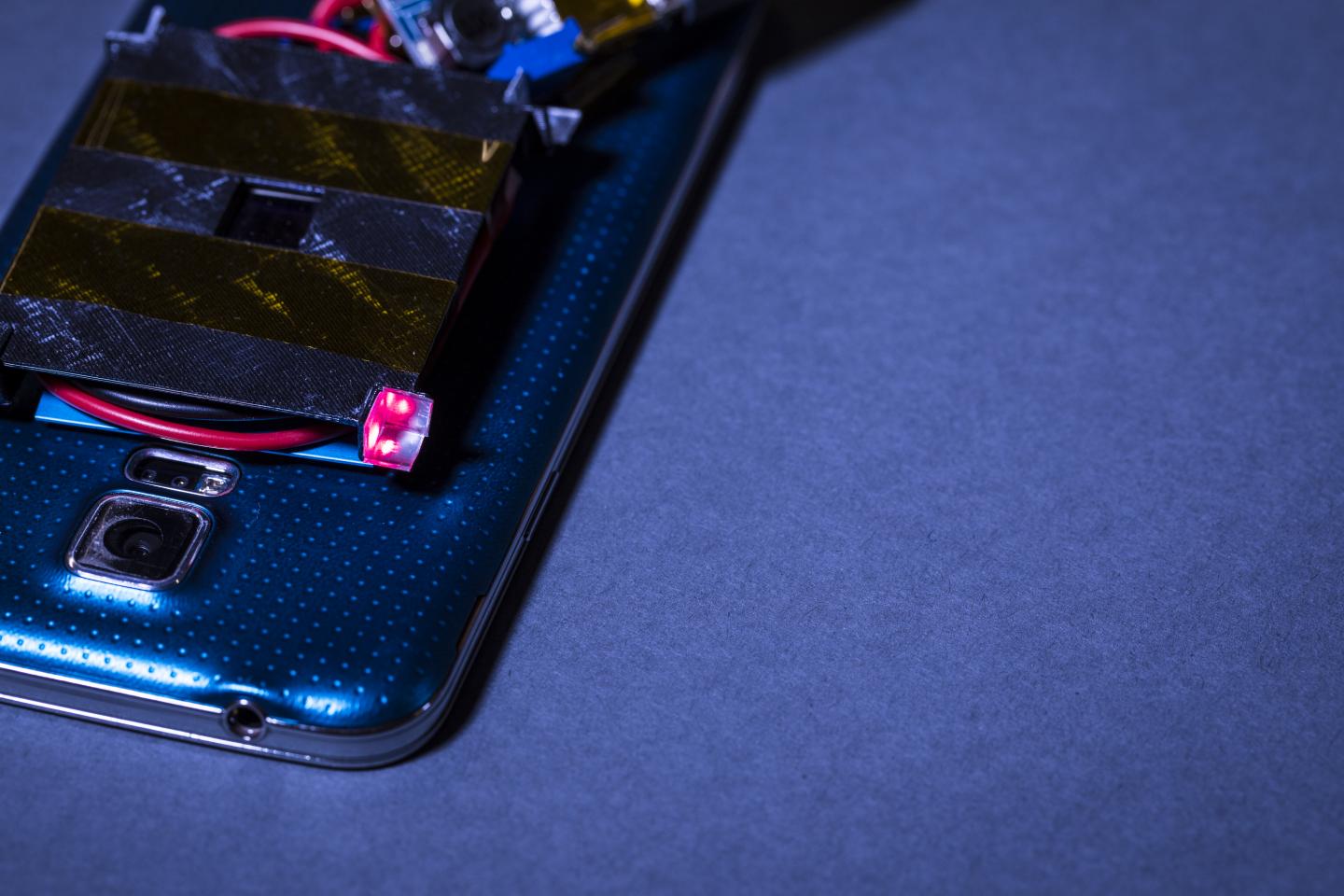 
"The guard beams are able to act faster than our quickest motions because those beams are reflected back to the emitter at the speed of light," said Gollakota. "As a result, when the guard beam is interrupted by the movement of a person, the emitter detects this within a fraction of a second and deploys a shutter to block the charging beam before the person can come in contact with it."

The next generation of nano-scale optical devices are expected to operate with Gigahertz frequency, which could reduce the shutter's response time to nanoseconds, added Majumdar.

The beam charges the smartphone via a power cell mounted on the back of the phone. A narrow beam can deliver a steady 2W of power to 15 square-inch area from a distance of up to 4.3 meters, or about 14 feet. But the emitter can be modified to expand the charging beam's radius to an area of up to 100 square centimeters from a distance of 12 meters, or nearly 40 feet. This extension means that the emitter could be aimed at a wider charging surface, such as a counter or tabletop, and charge a smartphone placed anywhere on that surface.

The researchers programmed the smartphone to signal its location by emitting high-frequency acoustic "chirps." These are inaudible to our ears, but sensitive enough for small microphones on the laser emitter to pick up.

"This acoustic localization system ensures that the emitter can detect when a user has set the smartphone on the charging surface, which can be an ordinary location like a table across the room," said co-lead author Vikram Iyer, a UW doctoral student in electrical engineering.

The UW team's prototype heatsink assembly, which can be attached to the back of a smartphone, consists of a photovoltaic cell (silver square, top) attached to a thermoelectric generator (in white). The generator is mounted on top of an aluminum heatsink. The entire assembly is only 8mm thick and 40mm wide. 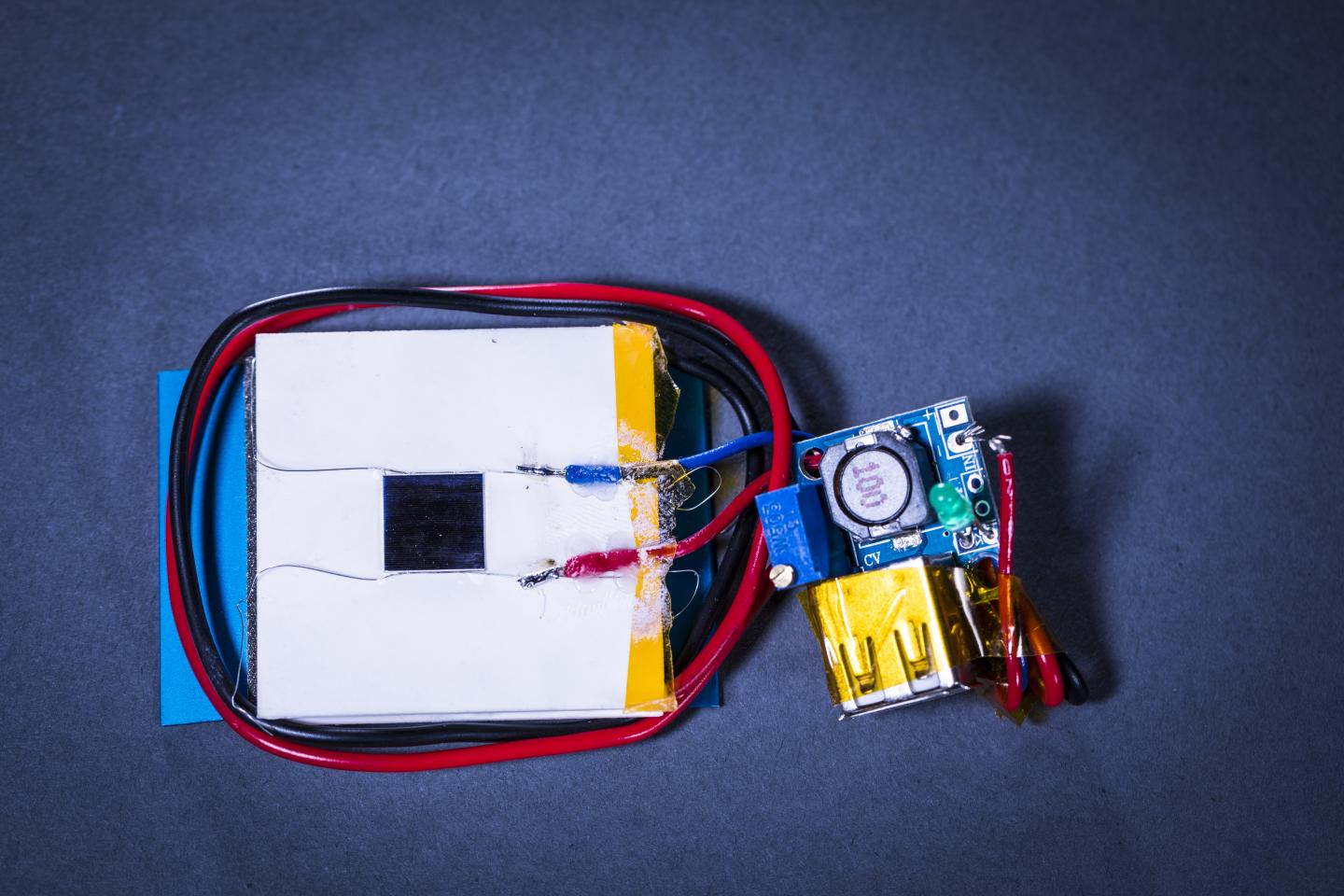 When the emitter detects the smartphone on the desired charging surface, it switches on the laser to begin charging the battery.

"The beam delivers charge as quickly as plugging in your smartphone to a USB port," said co-lead author Elyas Bayati, a UW doctoral student in electrical engineering. "But instead of plugging your phone in, you simply place it on a table."

The researchers believe that their robust safety and heat-dissipation features could enable wireless, laser-based charging of other devices, such as cameras, tablets and even desktop computers. If so, the pre-bedtime task of plugging in your smartphone, tablet or laptop may someday be replaced with a simpler ritual: placing it on a table.