How a Magnetic Cage on The Sun Stopped a Solar Eruption

A dramatic magnetic power struggle at the Sun’s surface lies at the heart of solar eruptions, new research using NASA data shows. The work highlights the role of the Sun’s magnetic landscape, or topology, in the development of solar eruptions that can trigger space weather events around Earth.

The scientists, led by Tahar Amari, an astrophysicist at the Center for Theoretical Physics at the École Polytechnique in Palaiseau Cedex, France, considered solar flares, which are intense bursts of radiation and light. Many strong solar flares are followed by a coronal mass ejection, or CME, a massive, bubble-shaped eruption of solar material and magnetic field, but some are not — what differentiates the two situations is not clearly understood.

Using data from NASA’s Solar Dynamics Observatory, or SDO, the scientists examined an October 2014 Jupiter-sized sunspot group, an area of complex magnetic fields, often the site of solar activity. This was the biggest group in the past two solar cycles and a highly active region. Though conditions seemed ripe for an eruption, the region never produced a major CME on its journey across the Sun. It did, however, emit a powerful X-class flare, the most intense class of flares. What determines, the scientists wondered, whether a flare is associated with a CME?

The team of scientists included SDO’s observations of magnetic fields at the Sun’s surface in powerful models that calculate the magnetic field of the Sun’s corona, or upper atmosphere, and examined how it evolved in the time just before the flare. The model reveals a battle between two key magnetic structures: a twisted magnetic rope — known to be associated with the onset of CMEs — and a dense cage of magnetic fields overlying the rope.

The scientists found that this magnetic cage physically prevented a CME from erupting that day. Just hours before the flare, the sunspot’s natural rotation contorted the magnetic rope and it grew increasingly twisted and unstable, like a tightly coiled rubber band. But the rope never erupted from the surface: Their model demonstrates it didn’t have enough energy to break through the cage. It was, however, volatile enough that it lashed through part of the cage, triggering the strong solar flare.

In this series of images, the magnetic rope, in blue, grows increasingly twisted and unstable. But it never erupts from the Sun’s surface: The model demonstrates the rope didn’t have enough energy to break through the magnetic cage, in yellow. 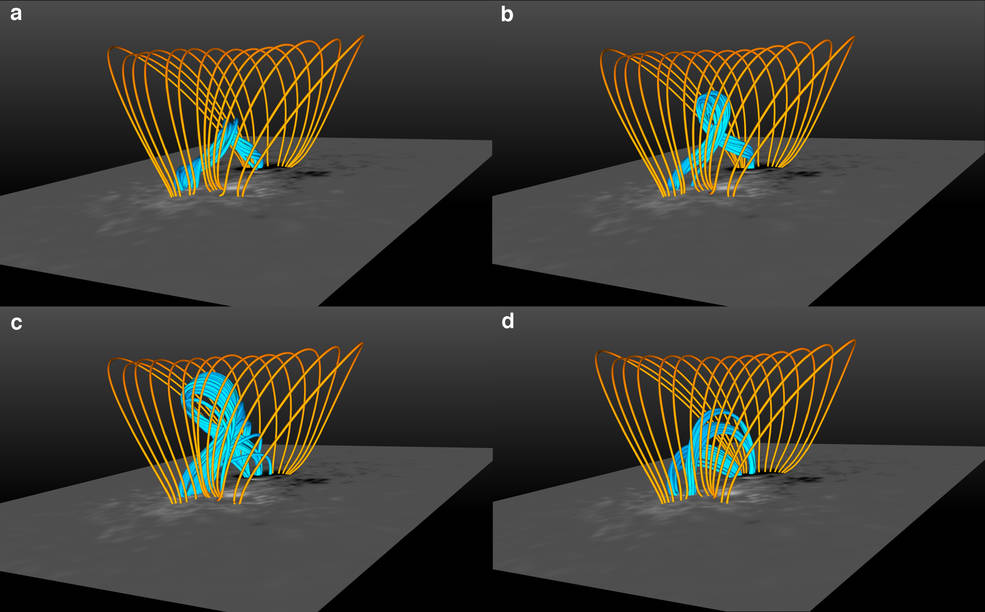 By changing the conditions of the cage in their model, the scientists found that if the cage were weaker that day, a major CME would have erupted on Oct. 24, 2014. The group is interested in further developing their model to study how the conflict between the magnetic cage and rope plays out in other eruptions. Their findings are summarized in a paper published in Nature on Feb. 8, 2018.

“We were able to follow the evolution of an active region, predict how likely it was to erupt, and calculate the maximum amount of energy the eruption can release,” Amari said. “This is a practical method that could become important in space weather forecasting as computational capabilities increase.”