A freshly peeled orange has a distinctive odor. Other objects and even some medical conditions are also associated with distinctive odors. For example, the nitroglycerin fumes in dynamite can smell like banana, while food infected with salmonella bacteria can release hydrogen sulfide gas that smells like rotten eggs. The sweat from people suffering from schizophrenia may smell like vinegar.

These odors may help security personnel detect hazardous materials or explosives like dynamite. But what happens if dynamite is hidden amongst oranges? Could an electronic nose distinguish between multiple sources when the VOC mixture is complex?

During Black History Month, the National Science Foundation (NSF) asks the question: Which black scientists are

Analytical and environmental chemist Isiah Warner of Louisiana State University (LSU) is an example of an NSF-supported researcher poised to transform their field of research and society.

For nearly 40 years, Warner's research has focused on fluorescence spectroscopy, a scientific method for studying how molecules interact with light in solutions such as a gas or liquid. Now, Warner and a team of LSU researchers are developing a new class of "electronic nose" that can more accurately detect hidden health, security and environmental concerns by simultaneously distinguishing and identifying the multiple volatile organic compounds (VOCs) that cause odors.

Warner's answer uses a group of uniform materials based on organic salts (GUMBOS) to detect multiple VOCs simultaneously. By using GUMBOS with a tool called a quartz crystal microbalance, Warner's research team developed an enhanced capability to measure the amount and mass of molecules causing specific odors and identify the substances.

Isiah Warner and his team use a tool called a quartz crystal microbalance (QCM) to determine the weight of molecules that compose gases, or volatile organic compounds (VOCs), that produce odors. This is a miniaturized version of it. A CQM works like a highly sensitive balance that can report the mass of a tiny amount of absorbed material. It consists of a thin quartz wafer coated with modified GUMBOS sandwiched between a pair of metal electrodes. When voltage is applied across the two electrodes, the quartz wafer vibrates. Changes in vibration or frequency indicate the mass of the absorbed material, while the GUMBOS identify the type and quantity. Collaborative inventor Jin-Woo Choi is working to miniaturize the CQM for use outside the laboratory. 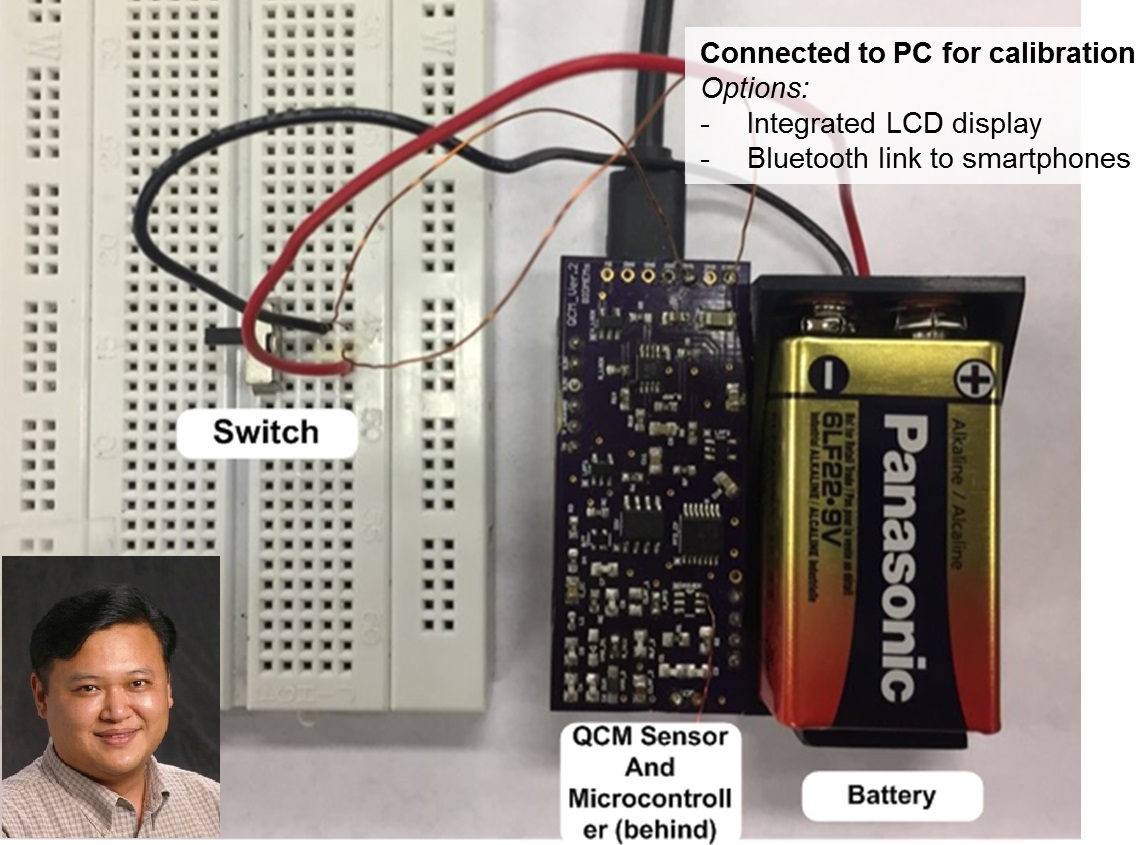 
The technology could be useful for sniffing out environmental contaminants, petrochemicals, food contaminants, explosive vapors and disease biomarkers, among other hazardous materials. For example, the devices could be deployed in military clothing to provide real-time monitoring of volatile materials, such as nerve gas agents or other toxic vapors.

Isiah Warner and his group members use a group of uniform materials based on organic salts, called GUMBOS, as sensing materials to identify the type and quantity of volatile organic compounds that produce multiple odors. 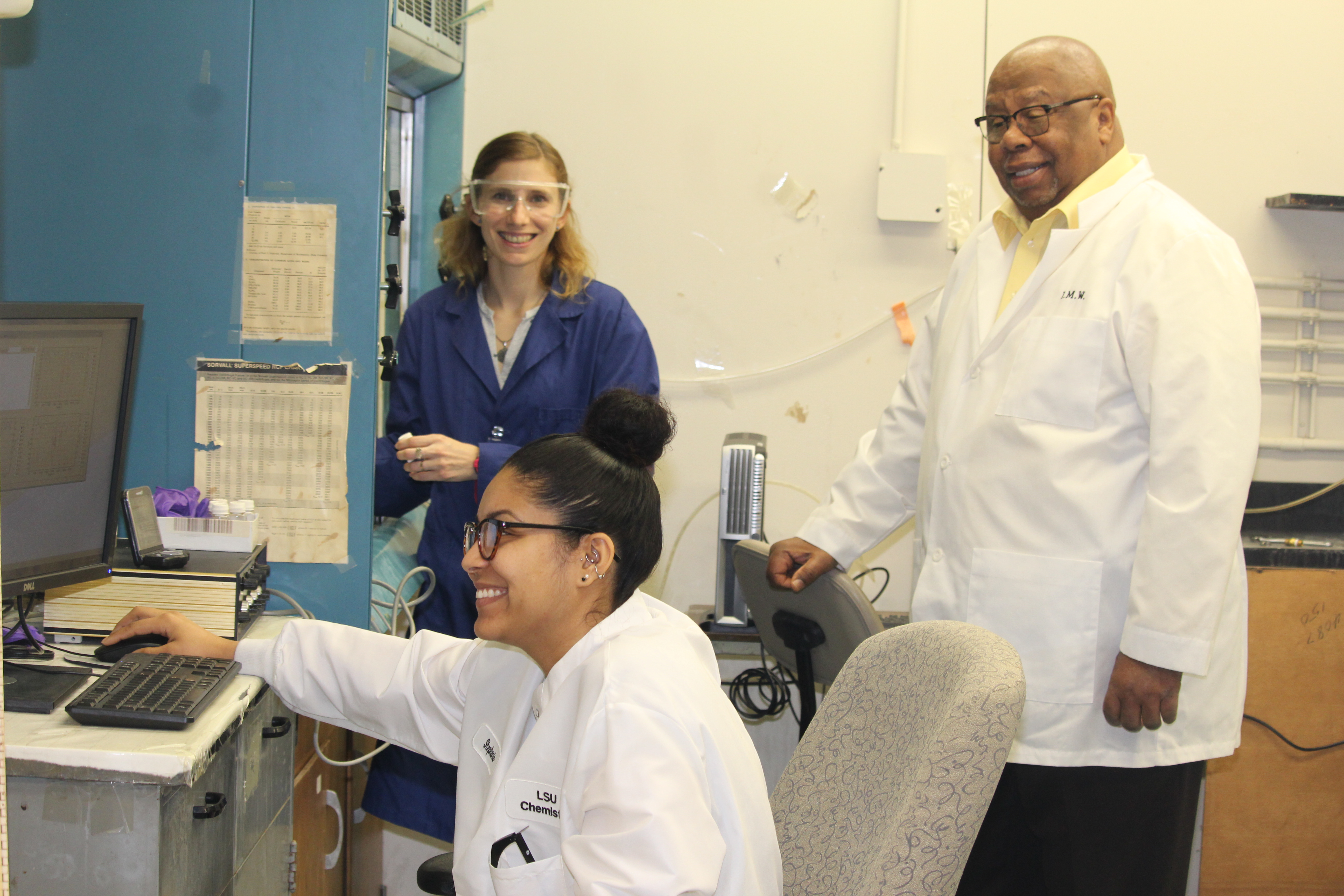 
"It is possible to miniaturize this device for mobile use in less attractive environments than the laboratory," Warner says. "We believe that our studies will ultimately provide a very sophisticated electronic nose for determining and recognizing complex mixtures of VOCs."

Warner holds the highest professorial rank in the LSU system as a Boyd Professor. He is also the Philip W. West professor of analytical and environmental chemistry, and recently was named 2016 Southeastern Conference professor of the year.

Warner, who has served as principal or co-principal investigator on numerous NSF awards, has published more than 350 refereed publications in a variety of journals and conducted educational research focused on maintaining and enhancing student education in science, technology, engineering and mathematics. In 1997, Warner received the nation's highest award for exceptional STEM mentoring -- the Presidential Award for Excellence in Science, Mathematics and Engineering Mentoring (PAESMEM) award. NSF administers the award on behalf of the White House.