Our brains weave together inputs from sight, taste and smell to determine whether food is safe and enjoyable to eat. Though it is often overlooked, texture also has a powerful effect on how we perceive and enjoy food. Mathias P. Clausen, a postdoctoral fellow at University of Southern Denmark in Odense, Denmark, became intrigued by jellyfish when he bit into the marine delicacy and experienced an unexpected crunch.

"Tasting jellyfish myself, I wanted to understand the transformation from a soft gel to this crunchy thing you eat," Clausen said.

Danish scientists combined their expertise in biophysics and biochemistry to gain a better understanding of how food preparation affects jellyfish from the inside out, turning it in to a crunchy chip. 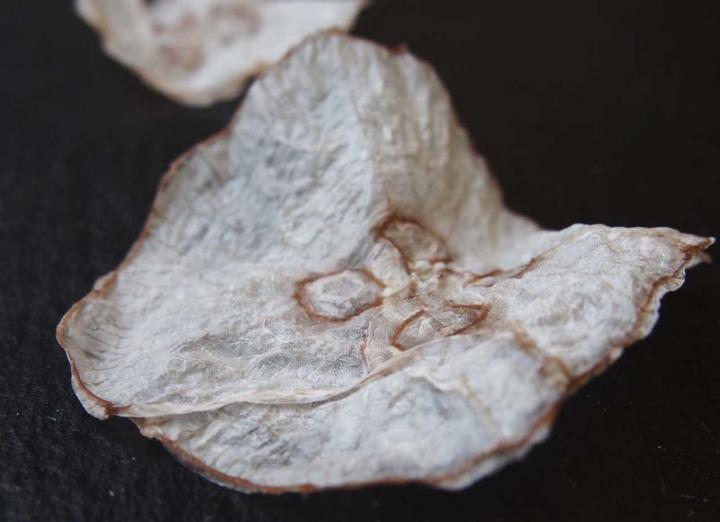 Clausen and a team of other Danish scientists combined their expertise in biophysics and biochemistry to gain a better understanding of how food preparation affects jellyfish from the inside out. Clausen and his team presented their work during the 62nd Biophysical Society Annual Meeting, held Feb. 17-21, in San Francisco, California.

Jellyfish have been a staple in Asian cuisine for centuries, but remain an oddity to the western palate. Traditionally, the bell or body of a jellyfish is marinated in salt and potassium alum for several weeks to produce a crunchy, picklelike texture. The Danish research team developed a new technique that produces the same results in only a few days.

"Using ethanol, we have created jellyfish chips that have a crispy texture and could be of potential gastronomic interest," Clausen said.

The research team further investigated how the long fibrous filaments in the gelatinous jellyfish bell are transformed during the curing process to produce the crunchy texture. "Little is known about the molecular anatomy of the jellyfish," Clausen said. "We are still not completely sure which structures we are visualizing."

Overfishing and climate change have diminished (traditional) commercially available fishing stock. Jellyfish have filled in this gap and now, their booming populations are producing swarms. As a result, the fishing industry is looking to jellyfish as a viable food source for the expanding global population. Furthermore, jellyfish have numerous health benefits; they are rich in vitamin B12, magnesium, phosphorus, iron and selenium.

According to Clausen, the team hopes to delve deeper to understand the structures within the jellyfish bell and what eating them would feel like inside your mouth. This new scientific approach may affect future commercial viability of jellyfish, as well as other foods not commonly found on the dinner plate.

"As this is pioneering work, I think using tools available to us to tackle the science of good eating can open peoples' eyes for a completely new scientific field," Clausen said.