Meat production consumes a huge amount of energy and accounts for almost 15 % of all man-made greenhouse gas emissions. Furthermore, as the world’s population continues to grow, experts say our present appetite for meat is not sustainable.

Meat is an excellent source of protein, but it is not the only one. To give European consumers more options, the EU-funded PROTEIN2FOOD project is currently developing new products from high-quality protein-rich crops.

“If we can curb an increase in meat consumption through this project, by having more people eating plant-based protein, it would be good both for the health of people and that of the environment,” says the project spokesperson Raymond Gemen of the European Food Information Council (EUFIC), in Belgium.

Project coordinator Sven-Erik Jacobsen of the University of Copenhagen in Denmark adds: “We should produce plant based protein food which is so attractive that the consumers will prefer those to animal based alternatives.”

Some of the protein crops investigated in PROTEIN2FOOD, such as quinoa and amaranth, originate from the Andean region of South America. Researchers are working to fully adapt these plants to European climates and increase the amount and quality of protein found within them.

The project is also researching improved methods to extract the protein, creating novel protein-rich ingredients for food processing. The PROTEIN2FOOD partner, Prolupin, a German SME, transforms lupins, a traditional legume crop, into high-protein compounds for industrial use. A lupin whip that can be used in mayonnaise, as topping, or for producing vegetable ice cream has been developed.

Examples of some of the foods already developed include pasta enriched with peas and a quinoa beverage. The project is also conducting a market analysis looking at trends from 1961 to today to determine opportunities and barriers to the economic success of these products.
Supporting a sustainable world

According to the researchers, this is not about convincing people to become vegetarians, but more about reducing the amount of meat we eat in general, and getting our protein from alternative sources at least a few days each week.

“If we eat less meat overall, that’s the way to go: make the population a little more vegetarian rather than trying to radically convert people,” says Gemen.

Since crops like quinoa and amaranth are not traditionally grown in Europe, the project is providing intensive training courses for farmers to educate them on best agricultural practices.

Research on these crops has been ongoing for decades, although commercial production in Europe only started recently. The interest in protein crops is rising fast. Over the last year the area of quinoa produced in Denmark increased by 150 % and as of 2017 quinoa is being produced in 15 EU Member States.

Following on from that, the focus is on connecting the quinoa-producing farmers with food-processing SMEs, enabling the establishment of an innovative market-chain to ensure that more high-protein, plant-based foods reach the consumers. University students are also benefiting from the initiative by carrying out extensive studies relating to the project for their bachelor and master’s degrees.

PROTEIN2FOOD partner Louis Bolk Institute is exploring the food landscape for opportunities to introduce plant-based products. Therefore, they tested novel plant protein products and meat substitutes to identify barriers and drivers of their acceptance. Out of 11 products, quinoa burgers, ‘vegetarian’ chicken, and a vegetarian lupine spread are highly recommended by the participants. Especially meat replacing products that are not similar to meat and snacks low in sugar are perceived as sustainable and healthy.

In total, 28 meat reducers tested products from the following groups: meat replacers, new snacks with plant protein, replacement or enrichment of staple food, new sources of plant protein from lupine bean and new easy meal concepts (see table). They received the foods and an instruction booklet with recipe suggestions to test at home. After three weeks, participants reported their feedback through a two-piece questionnaire.

First, participants scored on a scale from 1 to 7 on tastefulness, familiarity, easiness of preparation and recommendation to friends and family (see table). The quinoa burger as well as lupin spread were considered as the tastiest products. The most familiar products were the ‘vegetarian’ chicken and the Quinotto. The Lupi Love spread (vegetarian spread made from lupins), protein enriched bread as well as the ready-made chickpea curry in a bag were judged as the products that are the easiest to prepare. In each category, the dried and chopped lupins scored the lowest. 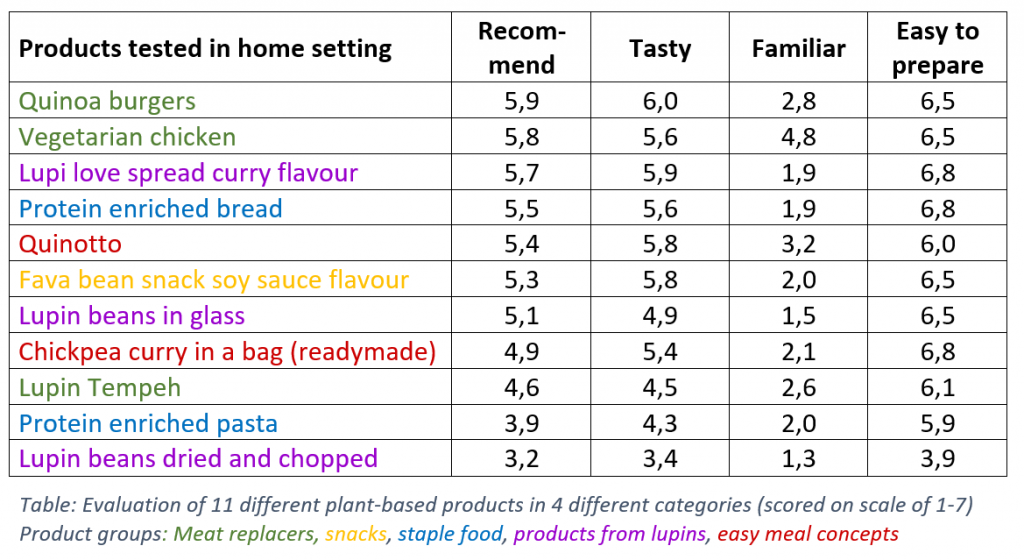 Second, participants discussed in groups about the following question: “What did you like about the product and what did you not like about the product?”. Since participants liked to replace meat, products such as quinoa burger or ‘vegetarian’ chicken were popular. However, meat imitation foods needed to be equally tasty as well as equally priced or cheaper. Within the group, replacers not similar to meat were regarded as more sustainable. Snacks and bites were only popular when low in sugar. For instance, participants considered the savoury bean snack with soy sauce flavour as a “filling, healthy and easy snack”.

The protein-rich staple foods were appreciated because of its easy preparation, but also revealed negative connotations like being more expensive, “overly processed” and less sustainable. The lupin beans in glass or dried and chopped were considered novel and yielded mixed reactions because participants struggled to pair it with other flavours. The participants preferred lupines as a processed, spiced and recognisable product such as the Lupi Love spread.

Overall, this investigation revealed that meat reducers are interested in new products and new technologies if the food is palatable, easy to prepare and has some clear advantages on health and environment. It underlines the importance of PROTEIN2FOOD’s work on developing novel protein ingredients and food prototypes to meet consumers’ demands.