Continental Interiors May Not Be as Tectonically Stable as Geologists Think

A University of Illinois-led team has identified unexpected geophysical signals underneath tectonically stable interiors of South America and Africa. The data suggest that geologic activity within stable portions of Earth’s uppermost layer may have occurred more recently than previously believed. The findings, published in Nature Geoscience, challenge some of today’s leading theories regarding plate tectonics.

The most ancient rocks on Earth are located within continental interiors, far from active tectonic boundaries where rocks recycle back into the planet’s interior. These strong, buoyant and deeply rooted blocks of Earth, called cratons, have been drifting on the surface for billions of years, seemingly undisturbed. They occasionally join and break apart along their edges in a dance called the supercontinent cycle.

“We usually think of cratons as being cold, stable and low-elevation,” said professor of geology and study co-author Lijun Liu. “Cold because the rocks are far above the hot mantle layers, stable because their crusts have not been disturbed significantly by faulting or deformation, and their low elevation is because they have been sitting there, eroding down for billions of years.”

However, there are places where cratons don’t follow these rules.

“For example, there are regions of high topography within the cratons of South America and Africa,” said graduate student and lead author Jiashun Hu.

Cratonic lithosphere with a high-density root undergoes delamination when perturbed by mantle plumes from beneath. The removed cratonic root then thermally grows back, with its rock fabrics preserving recent mantle deformation. 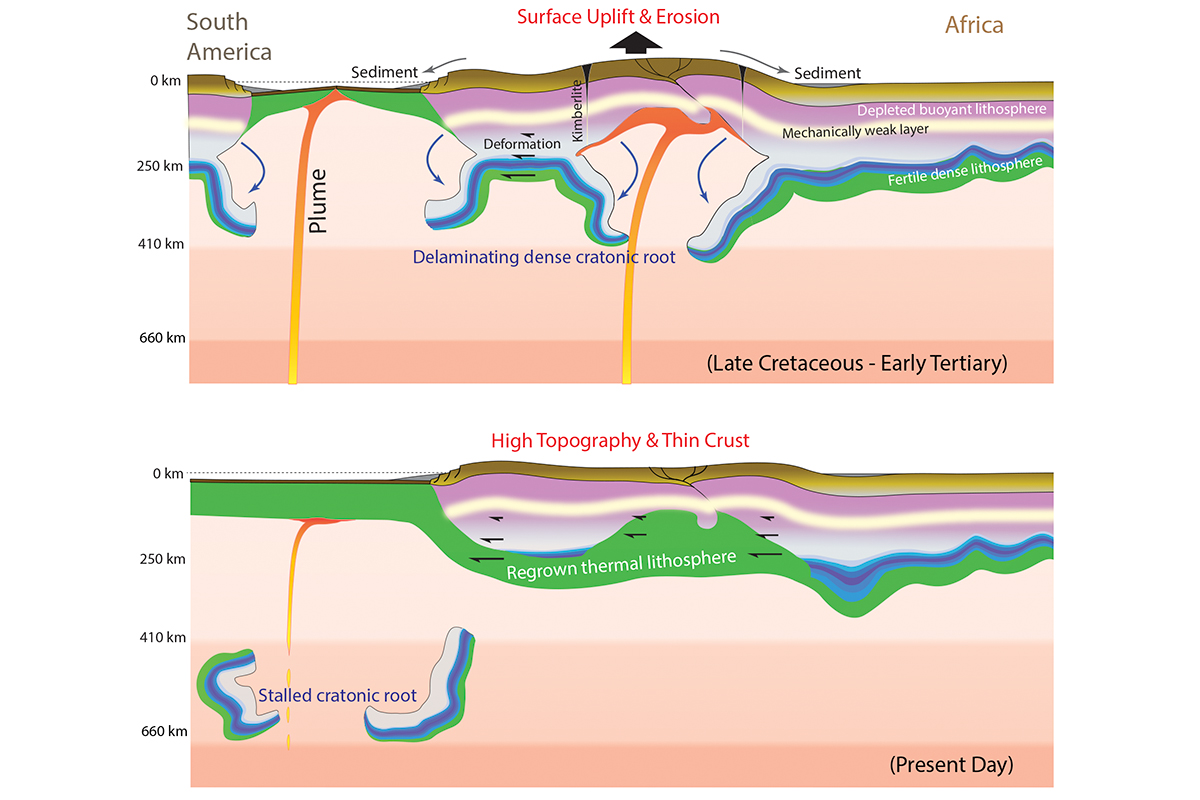 The researchers processed geophysical data with the Blue Waters supercomputer at the National Center for Supercomputing Applications at Illinois hoping to better understand these high-elevation regions. The thick roots of cratons have been thought to be buoyant due to their low-density mineral content, allowing them to float on top of the hot underlying mantle. However, the new data indicate that the cold mantle that lies below these regions in South America and Africa – once joined as part of the supercontinent Pangea – has a layered structure and that the lower layer was more dense in the past than it is today, Liu said.

This density difference could be the result of a process called mantle delamination. During delamination, the denser lower mantle layer peels away from the buoyant upper layer under the crust of the craton after interacting with hot magma from mantle plumes, the researchers said.

“From several types of seismic imaging data, we can see what we think are delaminated mantle slabs sinking into the hot, viscous deep mantle,” Liu said.

“The material that subsequently grows back at the roots of the cratons after delamination, due to cooling from above, is probably compositionally much less dense than what was there before,” said geology professor Craig Lundstrom. “That adds buoyancy, and that force from buoyancy could be what forms the anomalously high topography.”

Researchers, from left, Manuele Faccenda, of the University of Padova, and Stephen Marshak, Quan Zhou, Craig Lundstrom, Jiashun Hu and Lijun Liu, all of the University of Illinois, along with Karen Fischer of Brown University (not pictured), are challenging some of today’s leading theories regarding plate tectonics with their interpretation of ancient mantle-crust interactions. 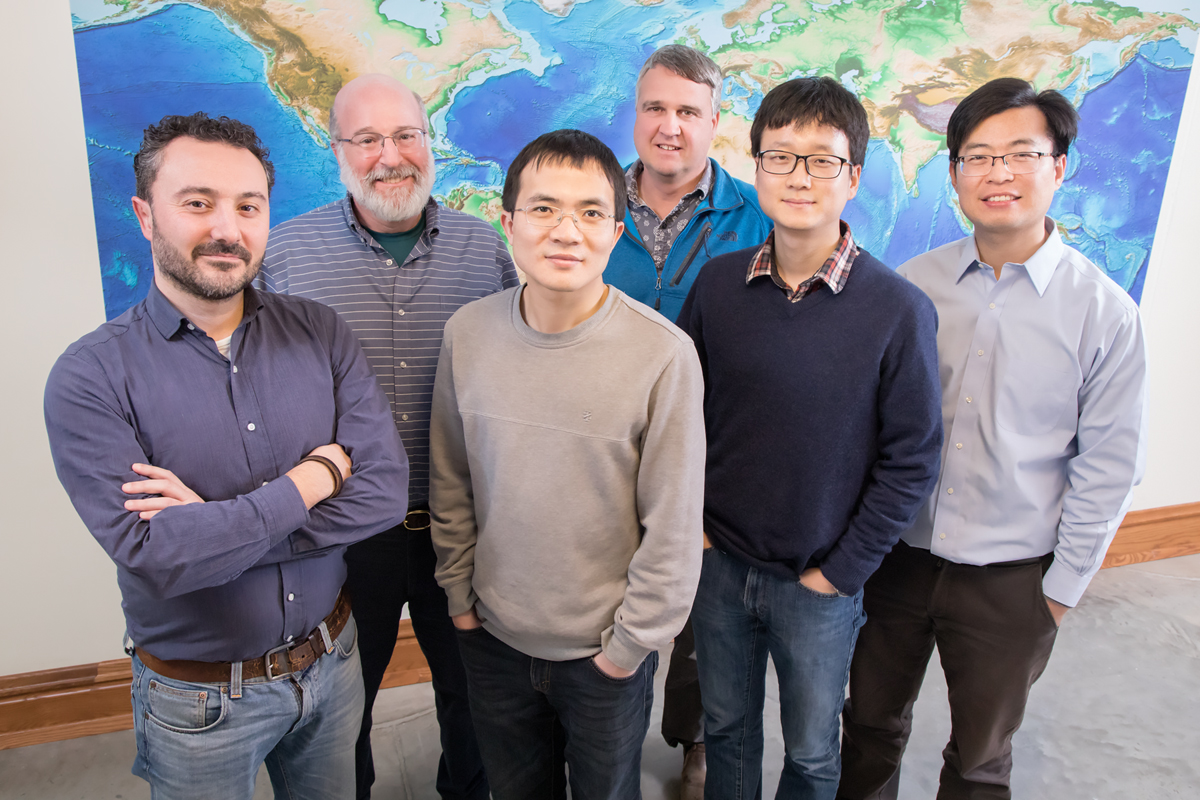 This multidisciplinary study is beginning to give the team a very logical – albeit complicated – update on the story of Earth’s tectonic history, the researchers said.

“The high topography of Africa and South America is only part of the story,” Hu said. “There are many geologic phenomena such as the location of hotspot trajectories, continental volcanism, surface uplift and erosion, as well as seismically imaged deformation within the craton roots that all seem to correlate well with the proposed delamination event, implying a potential causal relationship.”

There is also evidence to support other locations of craton-plume interaction during other times in Earth’s history.

“The rock record shows that uplift and erosion events have taken place during previous supercontinent cycles,” said geology professor and School of Earth, Society and Environment director Stephen Marshak. “A related study discusses what might be a similar event, namely continental uplift possibly related to delamination of cratonic lithosphere that caused the period of global erosion resulting in the Great Unconformity, which is the contact between Precambrian basement rock and Paleozoic sedimentary strata.”

For now, it is not clear if and how craton-plume interaction may affect modern-day earthquake activity and volcanism in areas thought of as geologically inactive. However, the study marks new thinking in how geologists may understand the so-called stable cratons.

The National Science Foundation, the National Center for Supercomputing Applications at the U. of I. and the Progetto di Ateneo grant funded this research.

Contacts and sources:
Lois Yoksoulian
University of Illinois at Urbana-Champaign