“Brain on a Chip” Reveals How the Brain Folds

Being born with a “tabula rasa” – a clean slate – in the case of the brain is something of a curse. Our brains are already wrinkled like walnuts by the time we are born.

Babies born without these wrinkles – smooth brain syndrome – suffer from severe developmental deficiencies and their life expectancy is markedly reduced. The gene that causes this syndrome recently helped Weizmann Institute of Science researchers to probe the physical forces that cause the brain’s wrinkles to form. In their findings, reported today in Nature Physics, the researchers describe a method they developed for growing tiny “brains on chips” from human cells that enabled them to track the physical and biological mechanisms underlying the wrinkling process.

Fluorescence images show the development of an organoid over days 3-11, in which the emergence of wrinkles is clearly seen 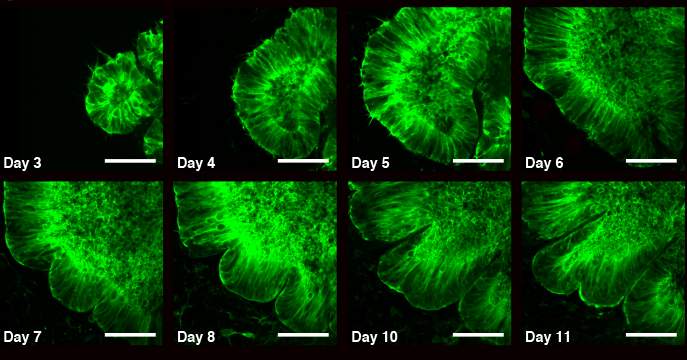 Tiny brains grown in the lab from embryonic stem cells – so-called organoids – were pioneered in the last decade by Profs. Yoshiki Sasai in Japan and Juergen Knoblich in Austria. Prof. Orly Reiner of the Institute’s Molecular Genetics Department says that her lab, along with many others, embraced the idea of growing organoids. But Dr. Eyal Karzbrun, in her lab, had to put a bit of a damper on their enthusiasm: The sizes of the organoids they obtained were far from uniform; with no blood vessels, the insides did not have a steady supply of nutrients and started to die; and the thickness of the tissue got in the way of the optical imaging and microscope tracking.

So Karzbrun developed a new approach to growing organoids – one that would enable the group to follow their growth processes in real time: He limited their growth in the vertical axis. This gave him a “pita”-shaped organoid – round and flat with a thin space in the middle. This shape enabled the group to image the thin tissue as it developed and to supply nutrients to all the cells. And by the second week of the tiny “brain’s” growth and development, wrinkles began to appear and then to deepen. Karzbrun: “This is the first time that folding has been observed in organoids, apparently due to the architecture of our system.”

As the organoid develops, the tissue in the outer part folds in a manner similar to those in the developing brain

Karzbrun is a physicist by training, and he naturally turned to physical models for the behavior of elastic materials to understand the formation of the wrinkles. Folds or wrinkles in a surface are the result of mechanical instability – compression forces applied to some part of the material. So for example, if there is uneven expansion in one part of the material, another part might be forced to fold in order to accommodate the pressure. In the organoids, the scientists found such mechanical instability in two places: The cytoskeleton – the internal skeleton – of the cells in the center of the organoid contracted; and the nuclei of the cells near the surface expanded. Or, to think of it another way, the outside of the “pita” grew faster than its inside.

While this achievement was impressive, Reiner was not convinced that the wrinkles in the organoids were really modeling the folds in a developing brain. So the group grew new organoids, this time bearing the same mutations carried by babies with smooth brain syndrome. Reiner had identified this gene – LIS1 – back in 1993, and has investigated its role in the developing brain and in the disease, which affects one in 30,000 births. Among other things, the gene is involved in the migration of nerve cells to the brain during embryonic development, and it also regulates the cytoskeleton and molecular motors in the cell.

The organoids with the mutated gene grew to the same proportions as the others, but they developed few folds and the ones they did develop were very different in shape from the normal wrinkles. Working on the assumption that differences in the physical properties of the cell were responsible for these variations, the group investigated the organoid’s cells with atomic force microscopy, with the help of Dr. Sidney Cohen of the Chemical Research Support Department. By measures of elasticity, the normal cells were about twice as stiff as the mutated ones, which were basically soft. Reiner: “We discovered a significant difference in the physical properties of cells in the two organoids, but we observed difference in their biological properties as well. For example, the nuclei in the centers of the mutant organoids moved more slowly, and we saw significant differences in gene expression.”

An organoid composed of cells bearing genetic mutations grows to the same size, but does not form the same folds as the normal organoid

Even before the paper’s publishing date, the scientific community has been showing great interest in this new approach to growing organoids. “It is not exactly a brain, but it is quite a good model for brain development,” says Reiner. “We now have a much better understanding of what makes a brain wrinkled or, in cases of those with one mutated gene, smooth.” The researchers plan to continue developing their approach, which they believe could lead to new insights into other disorders that are tied to brain development, including microcephaly, epilepsy and schizophrenia.

Also participating in this research were Prof. Yaqub Hanna, who assisted with growing the embryonic stem cells, and research student Aditya Kshirsagar in Reiner’s group.

Prof. Orly Reiner’s research is supported by the Helen and Martin Kimmel Institute for Stem Cell Research; the Nella and Leon Benoziyo Center for Neurological Diseases; the Kekst Family Institute for Medical Genetics; the Dr. Beth Rom-Rymer Stem Cell Research Fund; the Dears Foundation; Mr. and Mrs. Jack Lowenthal; the estate of David Georges Eskinazi; and the estate of Jacqueline Hodes. Prof. Reiner is the incumbent of the Bernstein-Mason Chair of Neurochemistry.