With the help of airborne laser mapping technology, a team of archaeologists, led by University of Arizona professor Takeshi Inomata, is exploring on a larger scale than ever before the history and spread of settlement at the ancient Maya site of Ceibal in Guatemala.

In a new paper published in the journal PLOS ONE, Inomata and his colleagues explain how they commissioned the use of LiDAR, or light detection and ranging, technology to map a significantly larger area of Ceibal than ever before recorded.

LiDAR provides highly accurate, detailed 3-D maps of ground surface topography. Over the course of just a few days at Ceibal, a small airplane, equipped with lasers powerful enough to peer through the dense jungle canopy, soared above the site, mapping -- with a less than 10-centimeter margin of error -- the shape, size and location of ancient Maya pyramids, platforms, ceremonial centers, roads, water reservoirs and other structures previously undocumented by archaeologists.

On the left is an aerial image of an area of Ceibal. On the right is the same area, as mapped by LiDAR. 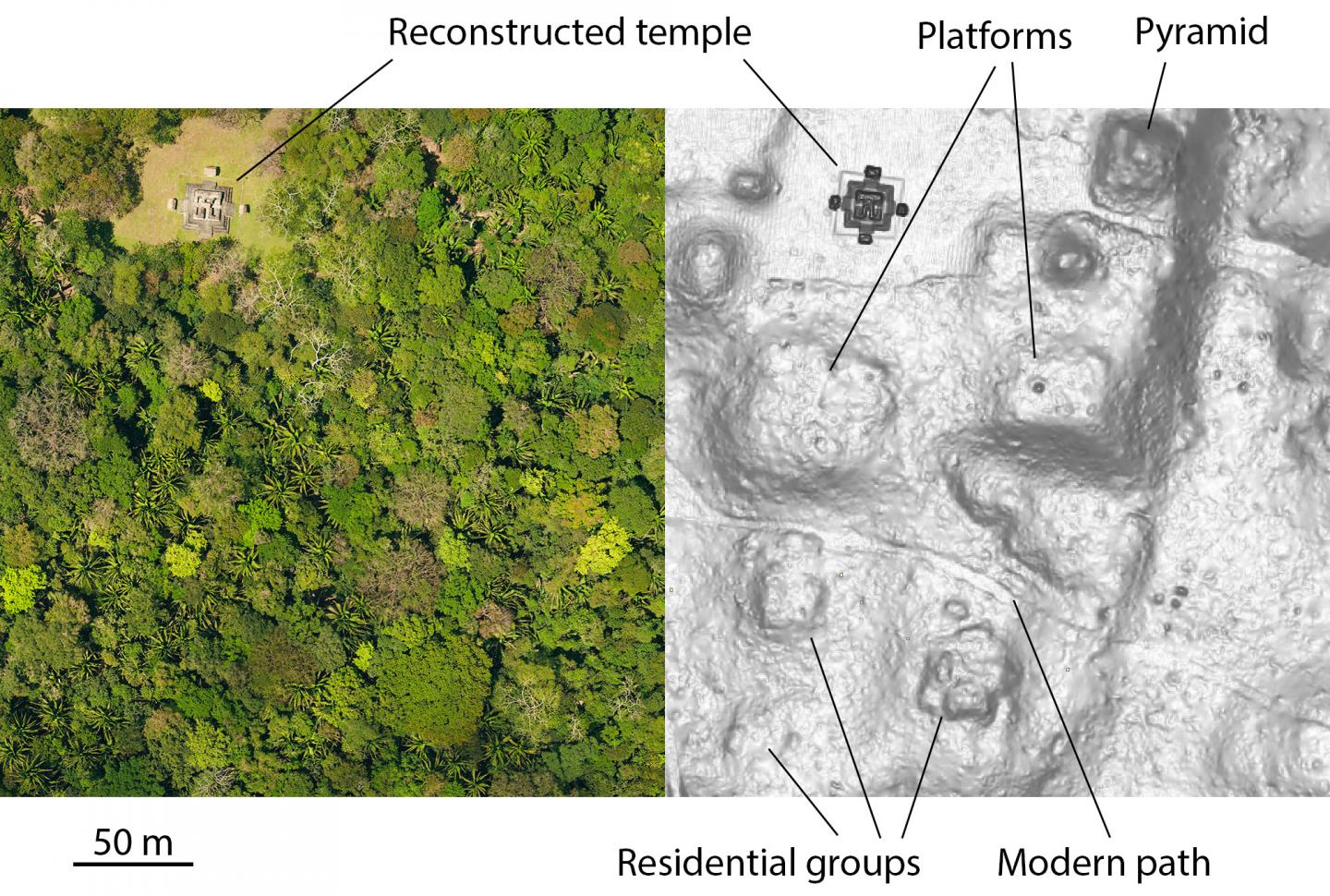 "This kind of understanding was really unthinkable some years ago, and now suddenly we can have all these data," Inomata said. "The scale is completely different."

Inomata and his colleagues used the LiDAR data to reconstruct a timeline of growth and change at Ceibal, building upon what they already knew from previous excavations about when different styles of structures appeared between about 1,000 B.C. and A.D. 950.

At the top is an aerial image of a reconstructed temple at Ceibal. At the bottom is the same area, mapped by thousands of individual laser points. 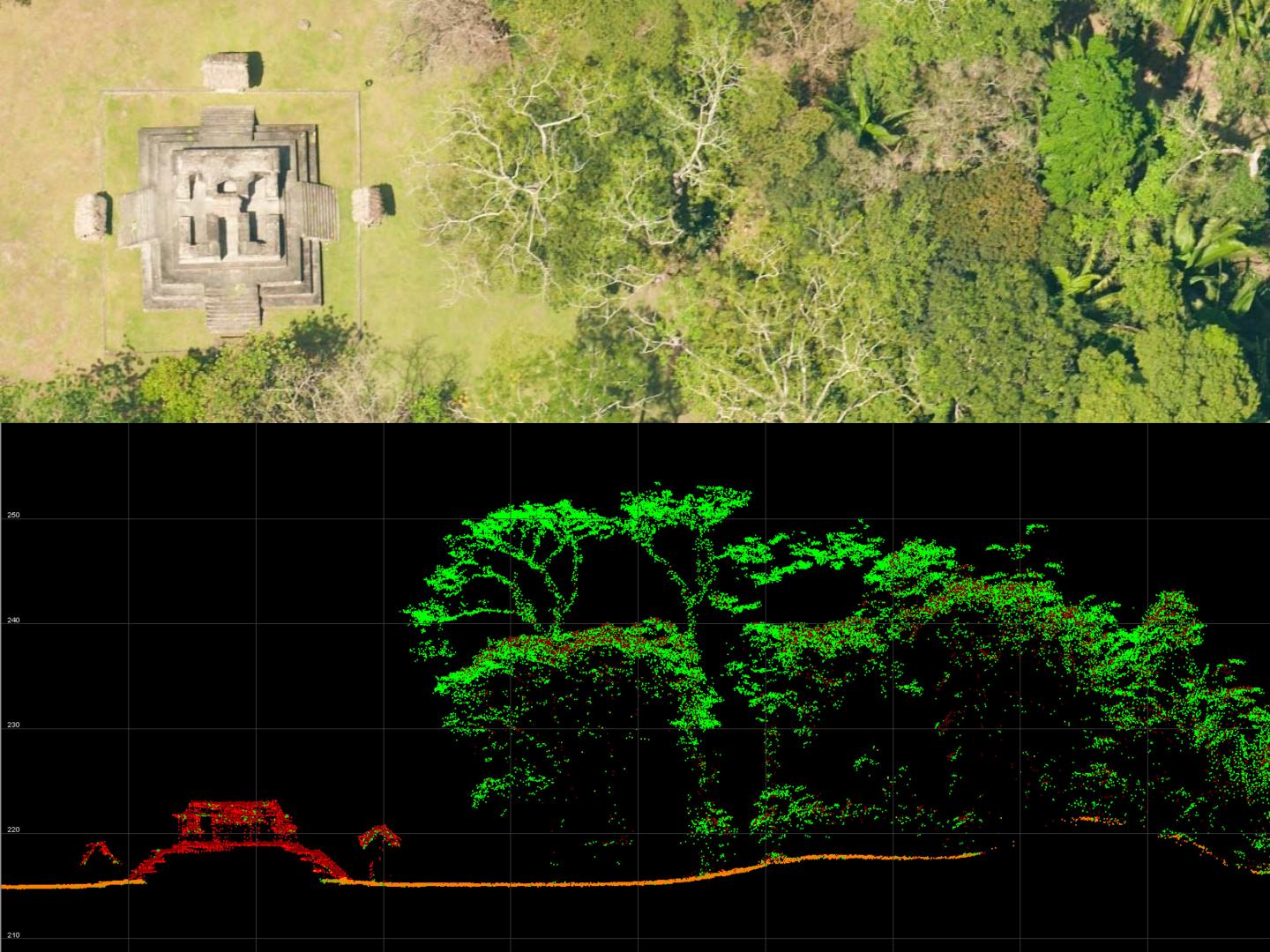 
They outline their methods in detail in the PLOS ONE paper.

"What we tried to do here was to set up a systematic method of analyzing this LiDAR data over a wide area, and then translate it into an interpretation of temporal sequences and social change," said Inomata, a professor and Agnese Nelms Haury Chair in Environment and Social Justice in the UA School of Anthropology.

Combining LiDAR and excavation data then allowed the archaeologists to reconstruct settlement patterns over a long period of time.

"Looking at the LiDAR image, you can see the specific types of architecture -- pyramids, long structures -- and we know from our excavations what time period they're from. So just looking at the shape of the structures, we can see this network of communities and ceremonial centers from specific periods," Inomata said.

Mapping an archaeological site in a densely vegetated area such as the Guatemalan jungle is a daunting task -- one traditionally done on foot. Because of the challenging terrain, only about 1.9 square kilometers of Ceibal had been completely mapped previously -- by Harvard archaeologists in the 1960s -- while about 6 more kilometers were surveyed with less detail.

It was in that small area that Inomata and his colleagues have been conducting archaeological excavations for the last 13 years.

Since joining the growing number of researchers who have used the LiDAR surveying method to help with interpretation of archaeological sites, Inomata and his team have gained access to data that would have been nearly impossible to obtain through on-foot surveys. The LiDAR survey, which was conducted by the University of Houston's National Center for Airborne Laser Mapping, even found a few things that the original on-the-ground mapping done in the 1960s missed.

UA archaeologist Takeshi Inomata during an excavation at Ceibal. 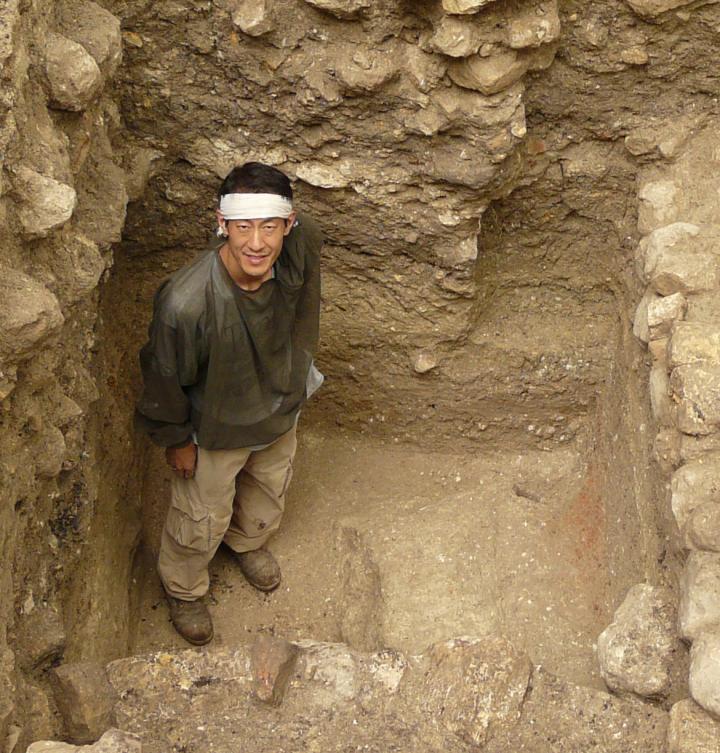 "The maps that Harvard made were incredibly accurate, considering they were all ground survey, but with LiDAR we found a lot more buildings than were on the map previously, and their locations are very accurate," said paper co-author Melissa Burham, a UA graduate student in anthropology.

As a growing number of researchers turn to the LiDAR surveying method to aid in the interpretation of archaeological sites, Inomata and his team hope their colleagues in the field may follow a similar process to what they used at Ceibal, which they plan to apply again in their regional survey in the state of Tabasco in Mexico, where they will begin work in February.

"In archaeology, excavation is always important, but you can't excavate everything, so you look for patterns on a smaller scale that you can extrapolate over a larger region," said Burham, who co-authored the paper along with Inomata, UA anthropology professor Daniela Triadan and researchers from Guatemala and Japan. "That's really what this paper aims to do. This can help other people understand growth at other Maya centers and help with dating methods."

Contacts and sources:
Alexis Blue
University of Arizona
on February 22, 2018