What Is Quantum Gravity? Do Gravitons Exist? What Scientists Think

Gravity is one of the most perplexing of  forces, and it still defies description.

Our world is ruled by four fundamental forces: the gravitational pull of massive objects, the electromagnetic interaction between electric charges, the strong nuclear interaction holding atomic nuclei together and the weak nuclear force causing unstable ones to fall apart.

Physicists have quantum theories for the last three of them that allow very precise calculations of phenomena on the smallest, subatomic scales. However, gravity does not fit into this scheme. Despite decades of research, there is no generally accepted quantum theory of gravity, which is needed to better understand fundamental aspects of our universe.

In this Q&A, Particle Physics and Astrophysics Professor Lance Dixon of Stanford University and the Department of Energy’s SLAC National Accelerator Laboratory explains one approach to developing such a theory, called quantum gravity.

Quantum gravity could be key to answering fundamental questions about the universe, such as the physics near black holes. In this illustration, turbulent winds of gas swirl around a black hole. Some of the gas is spiraling inward toward the black hole, but another part is blown away. 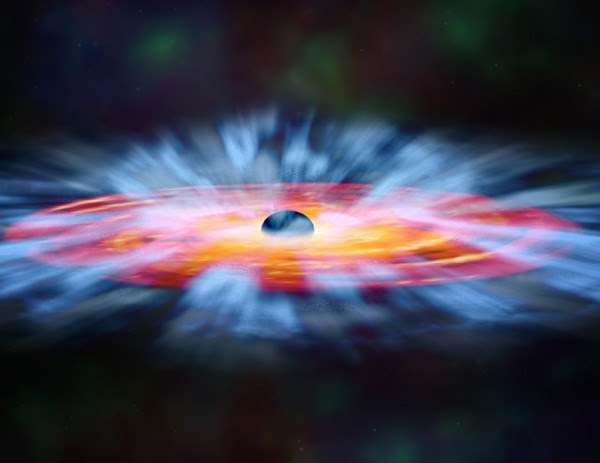 
What is quantum gravity?

With the exception of gravity, we can describe nature’s fundamental forces using the concepts of quantum mechanics. In these theories, which are summarized in the Standard Model of particle physics, forces are the result of an exchange of tiny quanta of information between interacting particles. Electric charges, for instance, attract or repel each other by exchanging photons – quanta of light that carry the electromagnetic force. The strong and weak forces have corresponding carriers called gluons and W and Z bosons, respectively.

We routinely use these theories to calculate the outcome of subatomic processes with extraordinary precision. For example, we can make accurate predictions for the complex proton-proton collisions at CERN’s Large Hadron Collider, the most powerful man-made particle accelerator.

But gravity is different. Although Albert Einstein’s general theory of relativity explains gravity on larger scales as the result of massive objects distorting the fabric of space-time, it doesn’t tell us anything about what happens to subatomic particles gravitationally. Quantum gravity is an attempt to combine Einstein’s general relativity with quantum mechanics. In analogy to the other forces, we predict gravity to be mediated by a force carrier as well, the graviton.

What questions do researchers hope to answer with quantum gravity?

Quantum gravity could help us answer important questions about the universe.

Researchers also hope to better understand the very first moments after the Big Bang, when the universe was an extremely hot and dense state with a tremendous amount of energy. On that energy scale, which we call the Planck scale, gravity was as strong as the other fundamental forces, and quantum gravitational effects were crucial. However, we don’t have a compelling quantum theory of gravity yet that could describe physics at those energies.

One has to realize, though, that processes on Earth occur at much smaller energy scales, with unmeasurably small quantum corrections to gravity. With the LHC, for instance, we can reach energies that are a million billion times smaller than the Planck scale. Therefore, quantum gravity studies are mostly “thought experiments,” in which we want to figure out whether we can make predictions about other interactions that might be measurable. However, it turns out that the calculations are quite complicated.


Lance Dixon, a professor for particle physics and astrophysics at Stanford and SLAC

Why is it so difficult to find a quantum theory of gravity?

One version of quantum gravity is provided by string theory, but we’re looking for other possibilities. Gravity is quite different from the other forces, for which we already have quantum theories.

First of all, gravity is extremely weak – on the order of a million billion billion billion times weaker than the weak force. In fact, the only reason why we notice gravity at all is because we feel the combined pull of a huge amount of particles in the Earth.

Gravity is also different because massive objects always attract each other. In contrast, the strong force is only attractive on very short distances, and the electromagnetic force can be either attractive or repellent.

Finally, the graviton fundamentally differs from all the other known force carriers in a particle property known as spin. It has twice the spin of the other force carriers.

How does this affect the calculations?

It makes the mathematical treatment much more difficult.

We generally calculate quantum effects by starting with a dominant mathematical term to which we then add a number of increasingly smaller terms. The number of terms, or order, we need to calculate depends on the accuracy we want to achieve. A complication is that higher-order terms sometimes become infinitely large, and we first need to get rid of these infinities, or divergences, to make meaningful predictions.

For the electromagnetic, weak and strong forces, we’ve known how to do this for decades. We have a systematic way of removing infinities for all orders, called renormalization, which allows us to calculate quantum effects very precisely. Unfortunately, due to gravity’s different nature, we haven’t found a renormalizable theory of gravity yet.

What have you learned about quantum gravity so far?

Over the past decades, researchers in the field have made a lot of progress in better understanding how to do calculations in quantum gravity. For example, it was empirically found that in certain theories and to certain orders, we can replace the complicated mathematical expression for the interaction of gravitons with the square of the interaction of gluons – a simpler expression that we already know how to calculate.

We’ve succeeded in using this discovery to calculate quantum effects to increasingly higher order, which helps us better understand when divergences occur. My colleagues and I have made calculations to fourth order in a theory called N=8 supergravity without finding any divergences. Ideally, we would like to compute to higher orders to test various predictions for infinities, but that’s very hard.

We were also involved in a recent study in which we looked at the theory of two gravitons bouncing off each other. It was shown over 30 years ago that divergences occurring on the second order of these calculations can change under so-called duality transformations that replace one description of the gravitational field with a different but equivalent one. These changes were a surprise because they could mean that the descriptions are not equivalent on the quantum level. However, we’ve now demonstrated that these differences actually don’t change the underlying physics.

How is your approach to quantum gravity different from string theory?

In the approach we’re taking, subatomic particles are described as point-like, as they are in the Standard Model. Each of these particles is associated with a fundamental field that extends throughout space and time. In string theory, on the other hand, particles are thought to be different vibrations of an extended object, similar to different tones coming from the same guitar string. In the first approach, gravitons and photons, for example, are linked to gravitational and photon fields, whereas in string theory, both are different vibrational modes of a string.

One appeal of string theory is that its way of treating particles like extended objects solves the problem of divergences. So, in principle, string theory could make predictions of gravitational effects on the subatomic level.

However, over the years, researchers have found more and more ways of making string theories that look right. I began to be concerned that there may be actually too many options for string theory to ever be predictive, when I studied the subject as a graduate student at Princeton in the mid-1980s. About 10 years ago, the number of possible solutions was already on the order of 10500. For comparison, there are less than 1010 people on Earth and less than 1012 stars in the Milky Way. So how will we ever find the theory that accurately describes our universe?

For quantum gravity, the situation is somewhat the opposite, making the approach potentially more predictive than string theory, in principle. There are probably not too many theories that would allow us to properly handle divergences in quantum gravity – we haven’t actually found a single one yet.

What would be a breakthrough in the field?

It would be very interesting if someone miraculously found a theory that we could use to consistently predict quantum gravitational effects to much higher orders than possible today. Such a theory of gravity would fit into our current picture of nature’s other fundamental forces.

Email ThisBlogThis!Share to TwitterShare to FacebookShare to Pinterest
Labels: Pgysics