What Happens When Electrons Get Wet? Breaking Down Breakfast and Bridges

There's a particular set of chemical reactions that governs many of the processes around us--everything from bridges corroding in water to your breakfast breaking down in your gut. One crucial part of that reaction involves electrons striking water, and despite how commonplace this reaction is, scientists still have to use ballpark numbers for certain parts of the equation when they use computers to model them.

An article published in Nature Communications on Jan. 16 offers a new and better set of numbers from researchers at the University of Chicago, Argonne and Lawrence Livermore National Laboratories, and the University of California-San Diego. By improving computer models, these numbers may eventually help scientists and engineers create better ways to split water for hydrogen fuel and other chemical processes.

When an electron is injected into water, the liquid captures it. The energy gain due to this process is called the electron affinity of water, and it's key to understanding and modeling processes such as those occurring in photoelectrochemical cells to split water to generate oxygen and hydrogen, according to Alex Gaiduk, a postdoctoral fellow at UChicago and the lead author of the study.

A new study paints a more accurate picture of how electrons behave after striking water, and how quickly they're snatched up in chemical reactions. 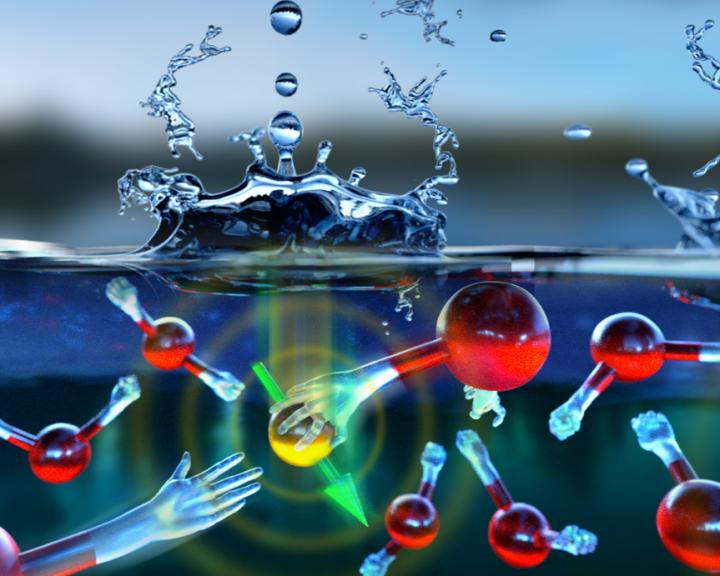 Until now, scientists faced technical challenges while experimentally measuring the electron affinity of water, said coauthor Giulia Galli, the Liew Family Professor at the Institute for Molecular Engineering at the University of Chicago and senior scientist at Argonne.

"Most of the results quoted in the literature as experimental numbers are actually values obtained by combining some measured quantities with crude theoretical estimates," Galli said.

Accurate theoretical measurements have been out of reach for some time due to the difficulty and high computational cost of simulating the interactions of electrons with water, said University of California-San Diego Professor Francesco Paesani, a co-author of the study who has spent years developing an accurate potential for the modeling of liquid water. But through a combination of Paesani's models, Galli's group's theoretical methods and software and Argonne's supercomputer, they arrived at a new and surprising conclusion.

According to the results, the electron is bound, but its binding energy is much smaller than previously believed. This prompted the researchers to revisit a number of well-accepted data and models for the electron affinity of water.

"We found large differences between the affinity at the surface and in the bulk liquid. We also found values rather different from those accepted in the literature, which prompted us to revisit the full energy diagram of an electron in water," said Lawrence Livermore National Laboratory scientist and coauthor T.A. Pham.

This finding has important consequences both for the fundamental understanding of the properties of water, as well as for understanding a type of reaction called reduction/oxidation reactions in aqueous solutions. These reactions are widespread in chemistry and biology, including how cells break down food for energy and how objects corrode in water.

The methods for excited states used in this study were developed over the years by Galli and her co-workers, within collaborations involving Pham and Marco Govoni from Argonne. The study also used supercomputing resources at Argonne.

Contacts and sources:
Louise Lerner
University of Chicago
on January 27, 2018