Two Ancient Routes of Settlement for Scandinavia Revealed by Genetics

Analysis of ancient DNA found that Scandinavia was settled by hunter-gatherers via a southern and a northern route, and reveals that agriculture was likely introduced by migrating agriculturalists.

An international team of scientists, led by researchers from the Max Planck Institute for the Science of Human History, analyzed ancient human genomes from 38 northern Europeans dating from approximately 7,500 to 500 BCE. The study, published in Nature Communications, found that Scandinavia was initially settled via a southern and a northern route and that the arrival of agriculture in northern Europe was facilitated by movements of farmers and pastoralists into the region.

Northern Europe could be considered a late bloomer in some aspects of human history: initial settlement by hunter-gatherers occurred only about 11,000 years ago, after the retreat of the lingering ice sheets from the Pleistocene, and while agriculture was already widespread in Central Europe 7,000 years ago, this development reached Southern Scandinavia and the Eastern Baltic only millennia later.

Skull included in this study from Ölsund, Hälsingland, Sweden, dating to around 2,300 BCE, in the ancient DNA laboratory at the Max Planck Institute for the Science of Human History. 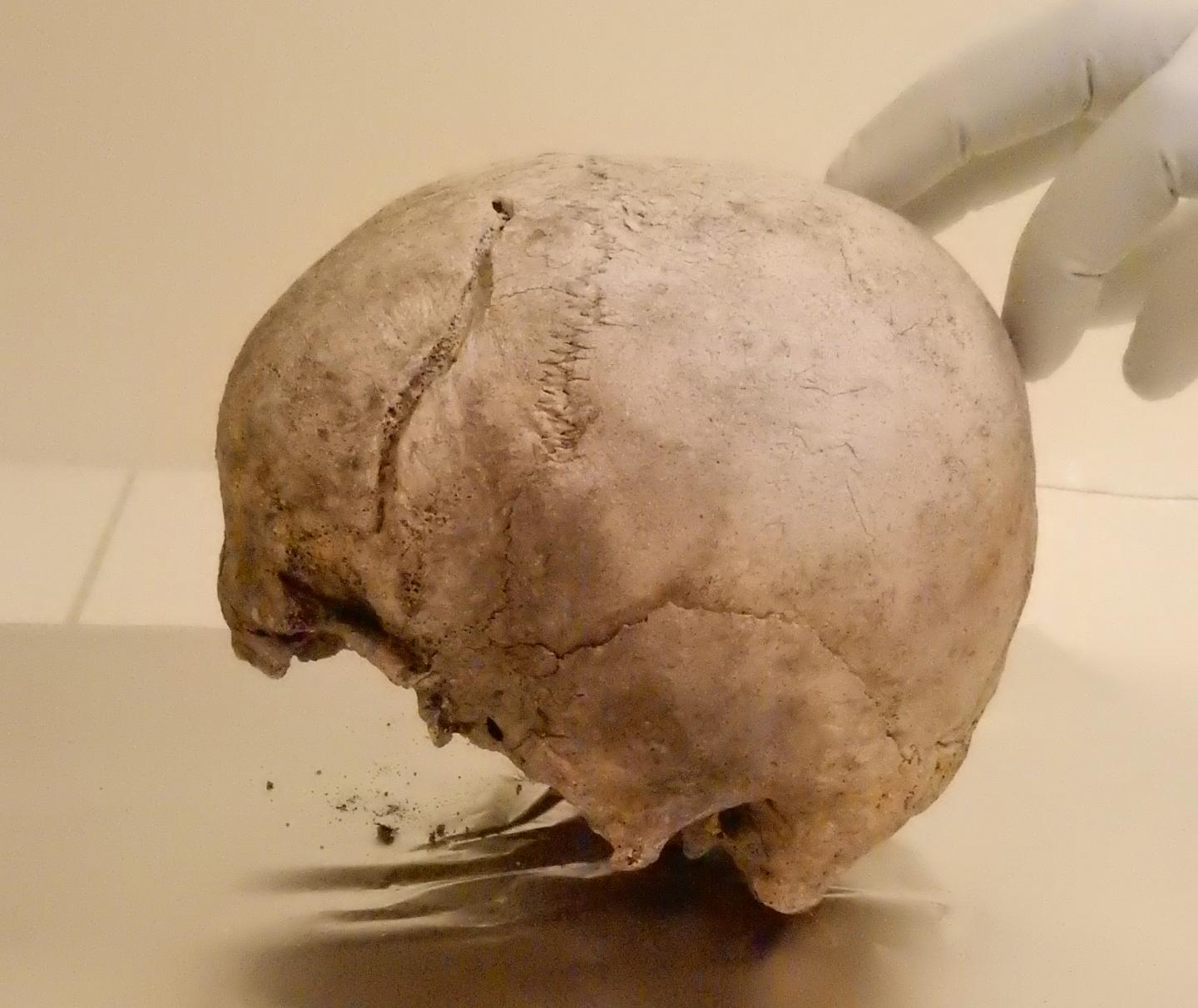 Several recent studies of ancient human genomes have dealt with the prehistoric population movements that brought new technology and subsistence strategies into Europe, but how they impacted the very north of the continent has still been poorly understood.

For this study, the research team, which included scientists from Lithuania, Latvia, Estonia, Russia and Sweden, assembled genomic data from 38 ancient northern Europeans, from mobile hunter-gatherers of the Mesolithic (approximately 12,000 to 7,000 years ago) and the first Neolithic farmers in southern Sweden (approximately 6,000 to 5,300 years ago) to the metallurgists of the Late Bronze Age in the Eastern Baltic (approximately 1300 to 500 BCE). This allowed the researchers to uncover surprising aspects of the population dynamics of prehistoric northern Europe.

Two routes of settlement for Scandinavia


Map showing locations and timeline of the samples introduced in this study. 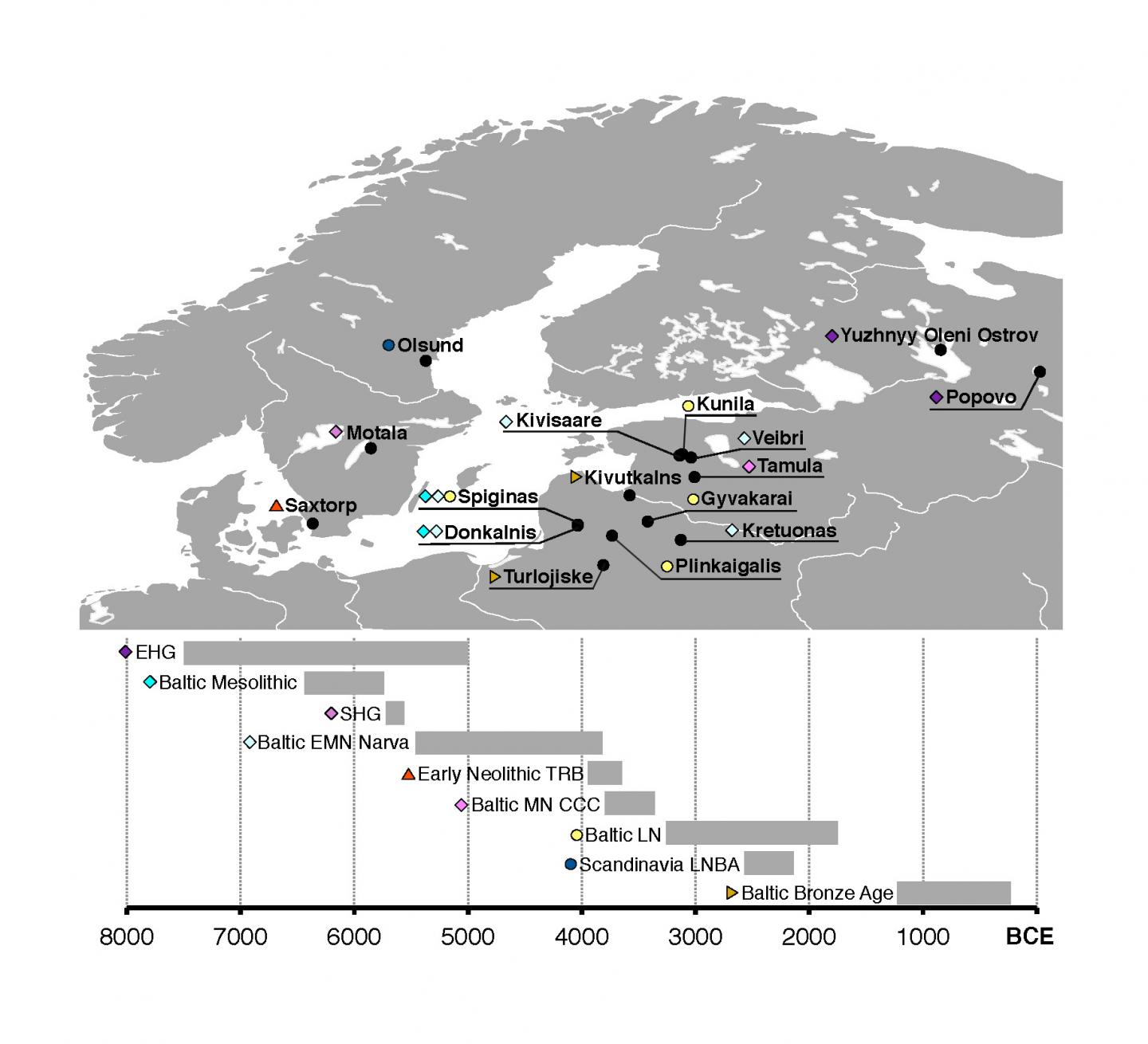 
"Eastern Hunter-Gatherers were not present on the eastern Baltic coast, but a genetic component from them is present in Scandinavia. This suggests that the people carrying this genetic component took a northern route through Fennoscandia into the southern part of the Scandinavian peninsula. There they genetically mixed with Western Hunter-Gatherers who came from the South, and together they formed the Scandinavian Hunter-Gatherers," explains Johannes Krause, Director of the Department of Archaeogenetics at the Max Planck Institute for the Science of Human History, and senior author of the study.

Large-scale farming first started in southern Scandinavia around 6,000 years ago, about one millennium after it was already common in Central Europe. In the Eastern Baltic, the inhabitants relied solely on hunting, gathering and fishing for another 1000 years. Although some have argued that the use of the new subsistence strategy was a local development by foragers, possibly adopting the practices of their farming neighbors, the genetic evidence uncovered in the present study tells a different story.

Similarly, a near-total genetic turnover is seen in the Eastern Baltic with the advent of large-scale agro-pastoralism. While they did not mix genetically with Central European or Scandinavian farmers, beginning around 2,900 BCE the individuals in the Eastern Baltic derive large parts of their ancestry from nomadic pastoralists of the Pontic-Caspian steppe.

"Interestingly, we find an increase of local Eastern Baltic hunter-gatherer ancestry in this population at the onset of the Bronze Age," states Alissa Mittnik of the Max Planck Institute for the Science of Human History, lead author of the study. "The local population was not completely replaced but coexisted and eventually mixed with the newcomers."

This study emphasizes the regional differences of cultural transitions and sets the stage for more in-depth studies of later periods in northern European prehistory, such as the Iron Age and Viking Age.