An international team of astronomers led by Giuseppina Battaglia, researcher at the Instituto de Astrofísica de Canarias (IAC), finds signs that the outer halo of the Milky Way contains stellar remains of massive dwarf galaxies that were devoured by our own. The extended stellar haloes are predicted to be an ubiquitous feature around Milky Way-like galaxies and to consist mainly of the shredded stellar component of smaller galactic systems.

Most of the information we have about the Milky Way stellar halo comes from its inner region, which we can observe close to the solar neighborhood. However, for the first time the chemical properties of the external regions of the halo of our galaxy were explored with high resolution spectroscopy in the optical of a sample of 28 red giant stars at large distances from the Sun.


“The abundance of some chemical elements in the stars in the external regions of the Milky Way halo - explains Giuseppina Battaglia, astrophysicist at the IAC and first author of the article - was found to be surprisingly different from the information we had concerning the inner regions of the halo”.

On the other hand, several similarities were discovered with the chemical composition observed for stars in nearby massive dwarf galaxies, such as Sagittarius and the Large Magellanic Cloud. These signatures tells us that the external regions of the stellar halo might contain the remains of one, or more, massive dwarf galaxy, devoured by the Milky Way.

Stellar haloes are a common component of galaxies like the Milky Way. “The theory explaining the formation of structure and galaxies in the Universe predicts that stellar haloes, and in particular their outer regions, consist mainly of the stellar component of destroyed, smaller galaxies.” G.Battaglia comments “Qualitatively this is in agreement with the observational findings of this study, where we found remnants of cannibalized dwarf galaxies around the Milky Way.”

Our Milky Way galaxy and its small companions are surrounded by a giant halo of million-degree gas (seen in blue in this artists' rendition) that is only visible to X-ray telescopes in space. University of Michigan astronomers discovered that this massive hot halo spins in the same direction as the Milky Way disk and at a comparable speed. 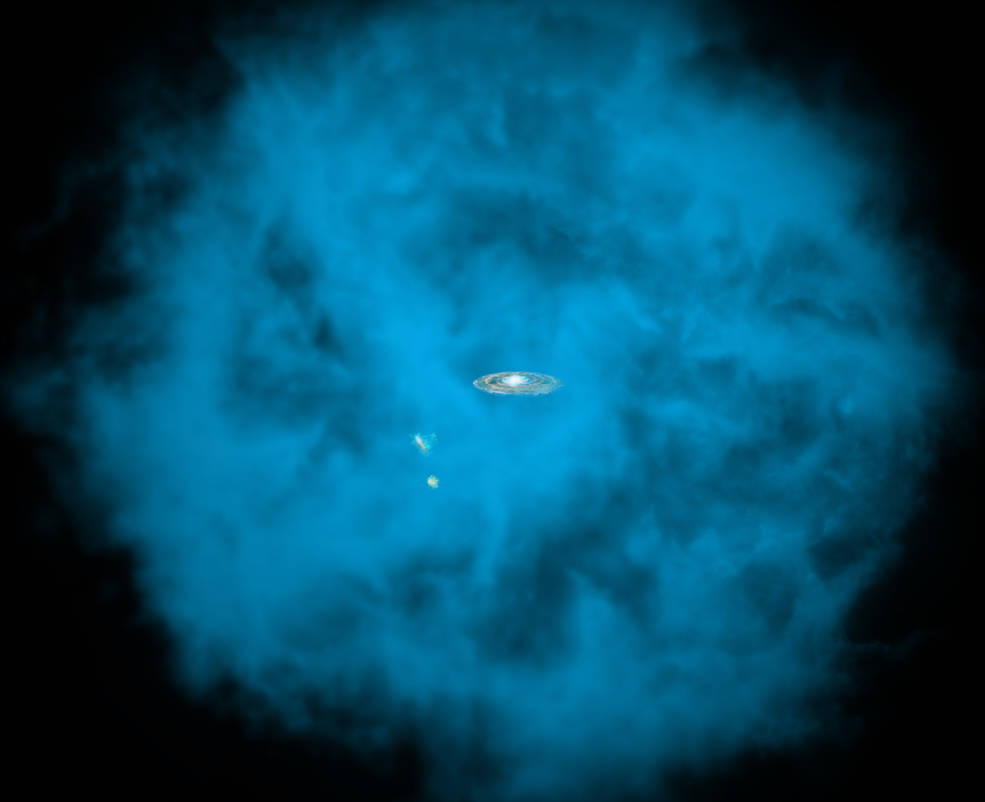 For this study data from about 100 hours of telescope observing time were used, obtained on facilities in both the Northern and Southern hemisphere. Specifically, the team used the Very Large Telescope "Kueyen" (UT2) of the European Southern Observatory in Paranal and the Magellan telescope Clay in Las Campanas, both in Chile, as well as the Hobby Eberly Telescope, in Texas.