An experiment featuring the largest flotilla of sensors ever deployed in a single area provides new insights into how marine debris, or flotsam, moves on the surface of the ocean.

The experiment conducted in the Gulf of Mexico near the site of the Deepwater Horizon oil spill placed hundreds of drifting sensors to observe how material moves on the ocean's surface. Rather than spread out, as current calculations would predict, many of them clumped together in a tight cluster.

The results hold promise for the cleanup of marine pollution and have wider implications for ocean science. The open-access paper was published in January in the Proceedings of the National Academy of Sciences.

"To observe floating objects spread out over a region the size of a city concentrate into a region smaller than a football stadium was just amazing," said first author Eric D'Asaro, a UW professor of oceanography. "We knew there would be some concentration, but the magnitude seen was quite stunning."

The project used hundreds of biodegradable white plastic drifters in several experiments to mimic how flotsam, or floating debris, travels in the ocean. 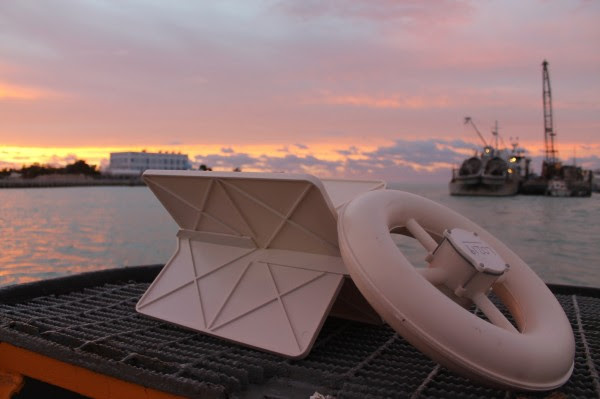 Textbook science would predict that material in the ocean would simply diffuse — that is, move apart or flow with the currents. But recent research has begun to explore the role of oceanic fronts and vortexes, and a 2015 study showed that small-scale eddies push phytoplankton down to hundreds of feet below the water's surface.

The new study shows that such eddies can draw in flotsam from a wide area. If scientists could somehow observe or predict this funneling behavior, it might help to clean up oil spills or recover marine plastics and other floating debris.


Credit: Dispatches from the Gulf

"The hope is to apply this in ocean cleanup projects, but first we have to figure out how to observe or predict where these concentrations will occur," D'Asaro said.

The research was funded by the industry-backed Gulf of Mexico Research Initiative.

For the 2016 field campaign, co-author Tamay Özgökmen and his team at the University of Miami designed inexpensive drifting sensors that are built from biodegradable plastic so that hundreds can be deployed at a time. During a winter cruise, the team placed the instruments about 75 kilometers from the mouth of the Mississippi River, in an area where fresh, cold river water meets saltier, warmer and denser water from the Gulf of Mexico. The cruise deployed more than 1,000 drifters, making it the largest-ever deployment of individually-trackable ocean drifters in a single location to see how they behave as a group.

The experiment that's the focus of this study dropped 326 drifters in a grid with 1 kilometer spacing over the course of about 16 hours. Eight days later, roughly half the drifters were contained in a circle the size of 60 meters (200 feet), an area 400 times smaller than when they began. Underwater observations show a bulge of seawater plunging down simultaneously in this location.

"It is much like the spinning vortex that forms in a bathtub: Water sinks in a small region, but water from much larger region moves toward the vortex," D'Asaro said.

The drifters are buoyant and stayed floating on the surface. They remained clumped together for about 10 days and then slowly dispersed over the following weeks. Meanwhile the other half of the drifters simply spread out over an area of 100 kilometers, as traditional calculations would predict.

A group of 326 drifters were initially dropped in February 2016 in a grid pattern in the Gulf of Mexico. The white dots in the video disperse, but the red dots clump together in an area about the size of a football field.

Credit: Andrey Shcherbina/University of Washington
"This is probably how the vertical exchange in the ocean ultimately works," said second author Andrey Shcherbina, an oceanographer at the UW's Applied Physics Laboratory. "Even though we think about ocean mixing as a large-scale process, once we start looking closer we begin to realize that it might actually happen episodically, on very small scales, at select hotspots that flash here and there."

The findings also have wider implications for how the ocean behaves. If mixing happens at smaller scales, and less buoyant material gets sucked down into the vortex, then finer-grained models could better capture processes such as blooms of marine plants, carbon transport and water circulation.

"There have been increasing theoretical reasons to believe that something like this should happen, and some previous measurements which supported those ideas," D'Asaro said. "But I think this will be a landmark experiment, because it is so dramatic and easy to understand."

This satellite image shows chlorophyll, contained in plants, at the surface during the North Atlantic spring bloom. Swirling eddies occur naturally in the water and play a key role in marine biology.


Contacts and sources:
Eric D'Asaro
University of Washington
on January 23, 2018