The nearby dwarf galaxy known as the Large Magellanic Cloud (LMC) is a chemically primitive place.

Unlike the Milky Way, this semi-spiral collection of a few tens-of-billions of stars lacks our galaxy's rich abundance of heavy elements, like carbon, oxygen, and nitrogen. With such a dearth of heavy elements, astronomers predict that the LMC should contain a comparatively paltry amount of complex carbon-based molecules. Previous observations of the LMC seem to support that view.

New observations with the Atacama Large Millimeter/submillimeter Array (ALMA), however, have uncovered the surprisingly clear chemical "fingerprints" of the complex organic molecules methanol, dimethyl ether, and methyl formate. Though previous observations found hints of methanol in the LMC, the latter two are unprecedented findings and stand as the most complex molecules ever conclusively detected outside of our galaxy.

Astronomers using ALMA have uncovered chemical “fingerprints” of methanol, dimethyl ether, and methyl formate in the Large Magellanic Cloud. The latter two molecules are the largest organic molecules ever conclusively detected outside the Milky Way. The far-infrared image on the left shows the full galaxy. The zoom-in image shows the star-forming region observed by ALMA. It is a combination of mid-infrared data from Spitzer and visible (H-alpha) data from the Blanco 4-meter telescope. 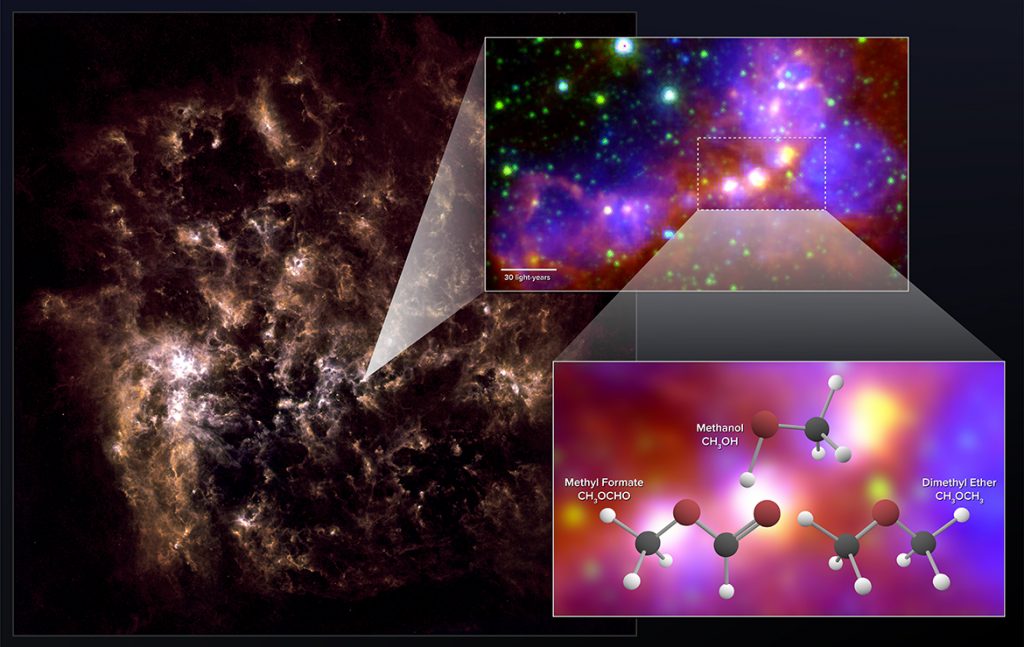 Astronomers discovered the molecules' faint millimeter-wavelength "glow" emanating from two dense star-forming embryos in the LMC, regions known as "hot cores." These observations may provide insights into the formation of similarly complex organic molecules early in the history of the universe.

"Even though the Large Magellanic Cloud is one of our nearest galactic companions, we expect it should share some uncanny chemical similarity with distant, young galaxies from the early universe," said Marta Sewiło, an astronomer with NASA's Goddard Space Flight Center in Greenbelt, Maryland, and lead author on a paper appearing in the Astrophysical Journal Letters.

Astronomers refer to this lack of heavy elements as "low metallicity." It takes several generations of star birth and star death to liberally seed a galaxy with heavy elements, which then get taken up in the next generation of stars and become the building blocks of new planets.

"Young, primordial galaxies simply didn't have enough time to become so chemically enriched," said Sewiło. "Dwarf galaxies like the LMC probably retained this same youthful makeup because of their relatively low masses, which severely throttles back the pace of star formation."

"Due to its low metallicity, the LMC offers a window into these early, adolescent galaxies," noted Remy Indebetouw, an astronomer at the National Radio Astronomy Observatory in Charlottesville, Virginia, and coauthor on the study. "Star-formation studies of this galaxy provide a stepping stone to understand star formation in the early universe."

The astronomers focused their study on the N113 Star Formation Region in the LMC, which is one of the galaxy's most massive and gas-rich regions. Earlier observations of this area with NASA's Spitzer Space Telescope and ESA's Herschel Space Observatory revealed a startling concentration of young stellar objects - protostars that have just begun to heat their stellar nurseries, causing them to glow brightly in infrared light. At least a portion of this star formation is due to a domino-like effect, where the formation of massive stars triggers the formation of other stars in the same general vicinity.

Sewiło and her colleagues used ALMA to study several young stellar objects in this region to better understand their chemistry and dynamics. The ALMA data surprisingly revealed the telltale spectral signatures of dimethyl ether and methyl formate, molecules that have never been detected so far from Earth.

If these complex molecules can readily form around protostars, it's likely that they would endure and become part of the protoplanetary disks of young star systems. Such molecules were likely delivered to the primitive Earth by comets and meteorites, helping to jumpstart the development of life on our planet.

The astronomers speculate that since complex organic molecules can form in chemically primitive environments like the LMC, it's possible that the chemical framework for life could have emerged relatively early in the history of the universe.

This research is presented in a paper titled "'The detection of hot cores and complex organic molecules in the Large Magellanic Cloud," by M. Sewiło, et al., which appears in the Astrophysical Journal Letters.
on January 30, 2018