Oxfam analysis shows new billionaire was created every other day.  There are now 2,043 dollar billionaires worldwide. Nine out of 10 are men.

Eighty two percent of the wealth generated last year went to the richest one percent of the global population, while the 3.7 billion people who make up the poorest half of the world saw no increase in their wealth, according to a new Oxfam report released today. The report is being released as political and business elites, including President Trump, are heading to Davos, Switzerland for the World Economic Forum.

Perhaps the most shocking element of the global labor market today is the existence and scale of modern slavery, including both forced labor and forced marriage. The ILO has estimated that 40 million people worldwide were enslaved in 2016 – 25 million of them in slave labor

Oxfam’s report, ‘Reward Work, Not Wealth,’ reveals how the global economy enables the wealthy elite to capture vast wealth while hundreds of millions of people struggle to survive on poverty pay. This includes the stunning new finding that the economy created a new billionaire every other day over a period of one year. 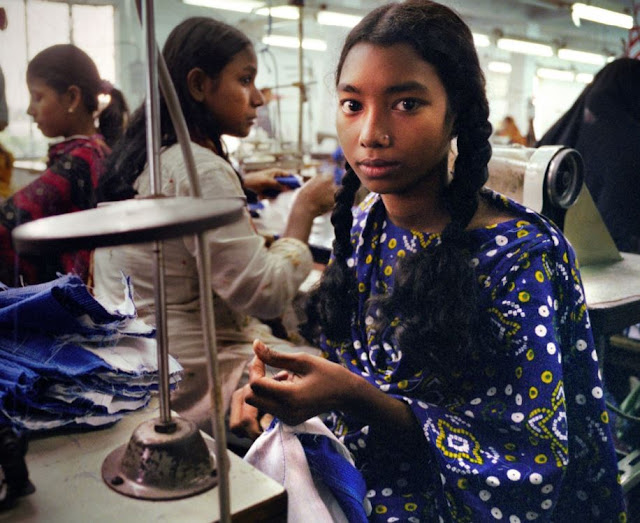 Last year saw the biggest increase in billionaires in history, one more every two days. Billionaires saw their wealth increase by $762bn in 12 months. This huge increase could have ended global extreme poverty seven times over. 82% of all wealth created in the last year went to the top 1%, while the bottom 50% saw no increase at all.

Dangerous, poorly paid work for the many is supporting extreme wealth for the few. Women are in the worst work, and almost all the super-rich are men. Governments must create a more equal society by prioritizing ordinary workers and small-scale food producers instead of the rich and powerful

“There’s a billionaire boom but most people are treading water in a stagnant global economy,” said Paul O’Brien, Oxfam America’s Vice President for Policy and Campaigns. “A perfect storm is driving up the bargaining power of those at the top while driving down the bargaining power of those at the bottom. If such inequality remains unaddressed, it will trap people in poverty and further fracture our society.” 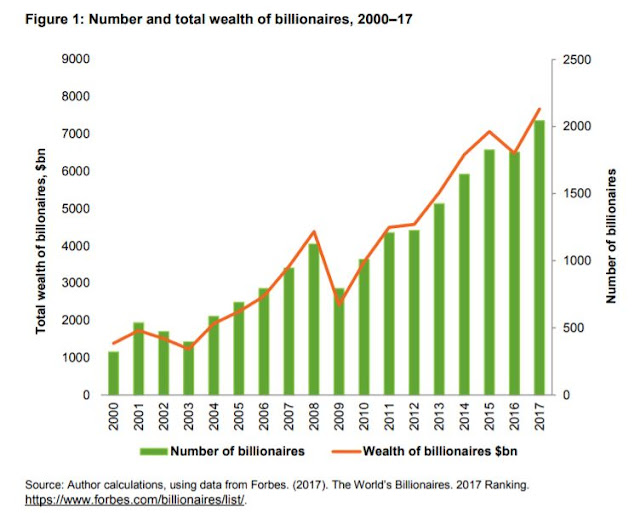 Oxfam’s report outlines the key factors driving up rewards for inherited wealth, shareholders and corporate executives at the expense of workers’ pay and conditions. These include the erosion of workers’ rights, the excessive influence of big business and wealthy interests over government policy-making, and the relentless corporate drive to minimize costs in order to maximize returns to shareholders.

While President Trump was elected on the promise to fix the rigged political and economic system, the tax bill he championed and signed into law just weeks ago will only further rig the rules in favor of the rich and powerful and deepen the inequality crisis. Corporations will get massive tax cuts and wealthy heirs will get more untaxed inheritance. In Davos, President Trump will do a victory lap with the primary beneficiaries of his policy agenda, which has largely focused on boosting the incomes of the extremely wealthy while doing grave damage to the poorest and most vulnerable people in the world.

According to the Pew Research Center, 50% of the global population lives on between $2 and $10 a day, including most of the world’s workers and small producers.1 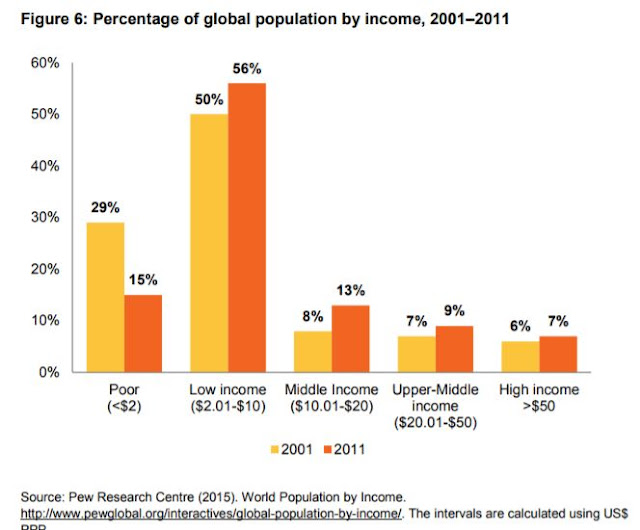 “President Trump likes to talk about the forgotten men and women but he clearly prefers to rub elbows with the richest of the rich,” continued O’Brien. “President Trump’s attendance at the World Economic Forum is fully consistent with his policy agenda, which has prioritized making the super-rich richer on the backs of the poorest.” 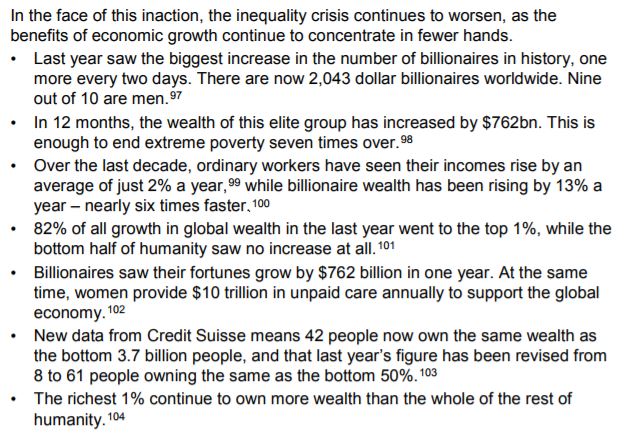 And while President Trump and Congressional leaders have downplayed the inequality crisis, the World Economic Forum has at least acknowledged the threat inequality poses to prosperity and security around the world for a number of years. Oxfam will be in Davos to ensure the world’s elite get the message that they must take real steps to end extreme inequality.

“The elites gathering in Davos are part of the problem, but they can part of the solution,” said O’Brien. “Now is the time for all of us to ensure our economies work for everyone and not just the fortunate few.” 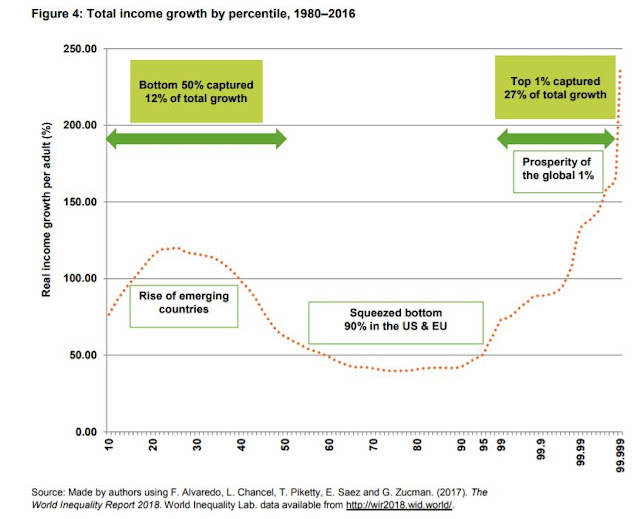 Oxfam is calling on governments and international institutions to recognize the detrimental impact our current economic system is having on the world’s poor and work to develop more human economies that prioritize greater equality. Policies such ensuring all workers receive a minimum ‘living’ wage, eliminating the gender pay gap, protecting the rights of women workers, and ensuring that the wealthy pay their fair share of tax would go far in achieving this goal. Oxfam estimates a global tax of 1.5 percent on billionaires’ wealth could pay for every child to go to school.

Oxfam focused especially on women workers who often find themselves off at the bottom of the economic heap. Across the world, women consistently earn less than men and are concentrated in the lowest paid and least secure forms of work. By comparison, 9 out of 10 billionaires are men.

“Across our world, we have heard from women struggling to make it in a system rigged against them. That includes in Vietnam, where women work in garment factories far from their children for poverty wages, here at home, where women working in the US poultry industry are forced to wear diapers because they are denied toilet breaks, or Canada or the Dominican Republic where women working in hotels feel forced to keep sexual harassment a secret for fear of losing their jobs,” said O’Brien. “Gender inequality is neither accidental nor new: our economies have favored rich and powerful men for many generations. To tackle extreme economic inequality, we must end gender inequality.”

In Myanmar, Oxfam works with young women garment workers who produce clothes for global brands. They earn $4 a day, which is double the extreme poverty line. Yet to earn this they work six or seven days a week for 11 hours a day. They struggle to meet basic needs for food and medicine and frequently fall into debt. This story is repeated all over the world.

In India, those living on $2 a day have a mortality rate three times the global average. The same is true in many other countries. If $2 is too low to achieve basic nutrition, or to secure a fair chance of surviving the first year of life, it is unclear why this should even be described as the end of ‘extreme poverty’. Healthcare spending during accidents or emergencies for low-income households often means a reduction in the consumption of food or other basic needs that can push people below the extreme poverty line.

One reason this is happening is because such a huge share of global income growth is consistently accruing to those at the top. The poorest 40% of people living in developing countries, which account for 80% of the global population, have seen their incomes grow slower than the rest of society. Higher levels of inequality negatively affect the benefits of economic growth reducing poverty.