Rainfall and Ocean Currents Linked for Thousands of Years

Research conducted at The University of Texas at Austin has found that changes in ocean currents in the Atlantic Ocean influence rainfall in the Western Hemisphere, and that these two systems have been linked for thousands of years.

The findings, published on Jan. 26 in Nature Communications, are important because the detailed look into Earth's past climate and the factors that influenced it could help scientists understand how these same factors may influence our climate today and in the future.

"The mechanisms that seem to be driving this correlation [in the past] are the same that are at play in modern data as well," said lead author Kaustubh Thirumalai, postdoctoral researcher at Brown University who conducted the research while earning his Ph.D. at the UT Austin Jackson School of Geosciences. "The Atlantic Ocean surface circulation, and however that changes, has implications for how the rainfall changes on continents.

This is a map of the world's major surface currents. 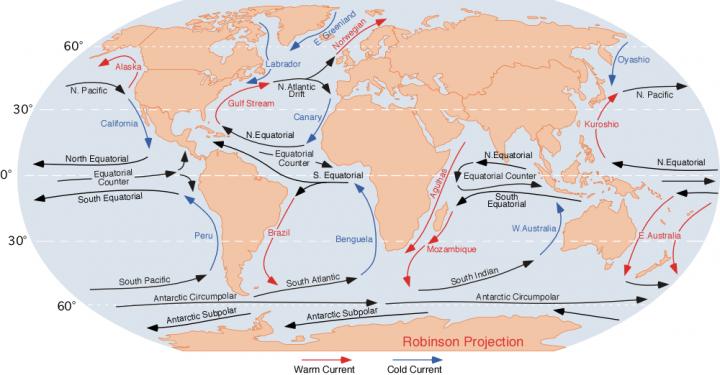 Thirumalai conducted the work at The University of Texas Institute for Geophysics (UTIG), a research unit at the UT Jackson School of Geosciences. Co-authors include UTIG scientists, and researchers from the U.S. Geological Survey St. Petersburg Coastal and Marine Science Center and the Massachusetts Institute of Technology.

The Atlantic Ocean surface circulation is an important part of the Earth's global climate, moving warm water from the tropics towards the poles. The foundation of the research involved tracking the changes in ocean circulation in new detail by studying three sediment cores extracted from the seafloor of the Gulf of Mexico in 2010 during a scientific cruise. The samples give insight into factors that influenced the strength of the ocean current in about 30-year increments over the past 4,400 years.

"If we go back in increments of 30, we're well positioned to understand things on the order of centuries," Thirumalai said. "And the question we decided to ask was what can those reconstructions of temperature and salinity tell us about the greater Atlantic Ocean surface circulation."

The small time increments scientists were able to capture in the cores are due to the large amounts of sediment that empty into the Gulf from rivers in Mexico and North America. The scientists extracted data about temperature and salinity data--factors that influence ocean current strength-- from ocean-dwelling microorganisms called foraminifera preserved in the sediments.

The data showed that, in comparison to today, the Atlantic Ocean surface circulation was much weaker during the Little Ice Age, a cool period thought to be triggered by volcanic activity that lasted from 1450-1850. Since these set of ocean currents are known to influence global climate, the researchers were interested to see if it correlated with rainfall in the Western Hemisphere, and how such a correlation could change over time.

A figure showing correlations between salinity in the Gulf of Mexico and rainfall on the continents in the modern era and the Little Ice Age. The colors represent rainfall (green is wetter conditions, brown is drier) and salinity (red is more saline conditions, blue is fresher). The modern era shows decadal-scale correlations between surface-ocean salinity in the northern Gulf of Mexico and salinity elsewhere in the oceans and rainfall on the continents. The shapes represent how data on rainfall during the Little Ice Age correlates with salinity data from the Gulf of Mexico from the same time period. The rainfall data was collected from proxy records, such as tree rings and cave formations, and the salinity data from sediment cores. 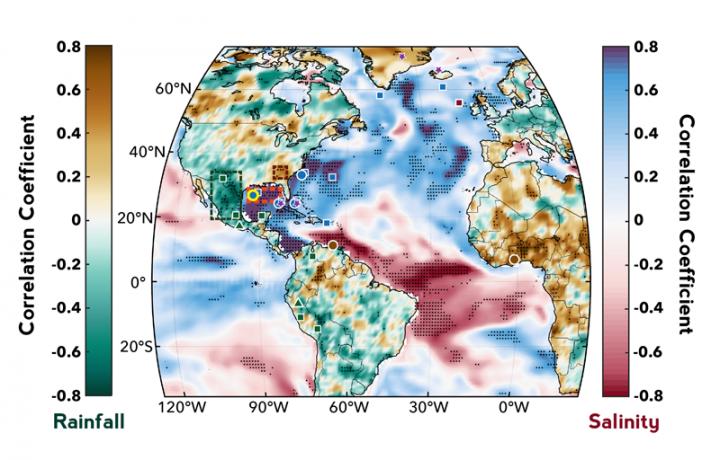 To calculate the correlation during the Little Ice Age, researchers compared the core data with proxies for precipitation data, such as data from tree rings, cave formations and other natural records. And to calculate the modern correlation, they compared data collected by humans during the last century on the temperature and salinity of the Gulf and rainfall in the Western Hemisphere. They also analyzed data from a climate model developed by the Max-Planck Institute for Meteorology in Germany to predict what the correlation between the current and rainfall would be expected to be during the Little Ice Age.

The results indicate that in present and past the Atlantic Ocean surface currents correlate with rainfall patterns in the Western Hemisphere. Thirumalai said that this finding is important for two reasons. It shows that a correlation exists between the current and rainfall patterns, and that the correlation is evident in data sets that cover different time scales.

"It was remarkable," Thirumalai said. "These patterns that are based on decadal analysis of modern data, and then the hydroclimate proxies that give the salinity in the oceans and the rainfall on land seem to show the same picture."

The findings emphasize the importance of the Atlantic Ocean surface circulation to rainfall, and that changes in the current can have far reaching impacts. That means that future changes to the Gulf's salinity and temperature could be expected to influence the climate in other ways.

"The study demonstrates a robust century-scale link between ocean circulation changes in the Atlantic basin and rainfall in the adjacent continents during the past 4,000 years," said UTIG Director Terry Quinn, a co-author on the study. "And hence it provides a baseline for predictions on how that part of the climate system may behave in the future."


Contacts and sources:
Monica Kortsha
The University of Texas at Austin

The research was supported by the National Science Foundation, National Oceanic and Atmospheric Administration, the Consortium for Ocean Leadership, the UT Jackson School of Geosciences and Brown University.
on January 27, 2018