A new imaging technique reveals how a painting was painted including the chemicals in the paint and what is under the paint.  ‘Macroscale multimodal chemical imaging’ revealed the details about second century Egyptian painting including pigment chemicals. . '

Scientists from UCLA and the National Gallery of Art have used a combination of three advanced imaging techniques to produce a highly detailed analysis of a second century Egyptian painting.

They are the first to use the specific combination — which they termed “macroscale multimodal chemical imaging” — to examine an ancient work of art. The new technique enabled them to learn about the raw materials the artist used, and the order in which they were applied to the painting, and it uncovered insights about the painting’s connections to other work from the same era.

The original painting (left), along with images made using hyperspectral reflectance, luminescence and X-ray fluorescence. 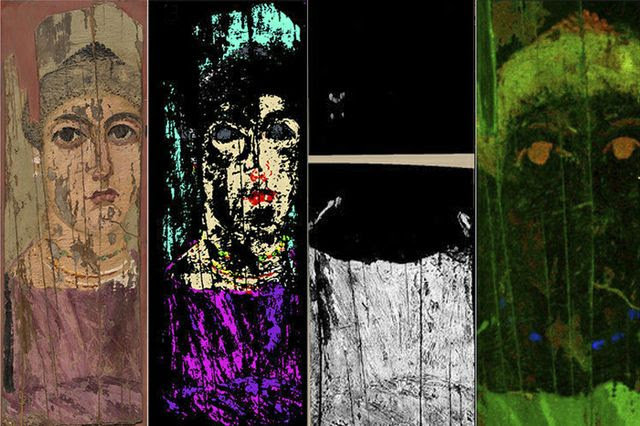 The approach, which is described in a paper published in Scientific Reports, integrates three existing techniques — hyperspectral diffuse reflectance, luminescence and X-ray fluorescence — to examine the painting.

The concept is a high-tech version of what might happen if one were to analyze an everyday object with, say, the naked eye, an X-ray and then an infrared lens, with each technique providing different information from the others, and the combination of the three providing a fuller picture of the object.

By combining data from the three modalities, the researchers were able to map the signatures of molecules and elements across the surface of the painting for each pixel of the image. The findings revealed important details on the painting’s composition and structure.

The work was led by Ioanna Kakoulli, professor of materials science and engineering at the UCLA Henry Samueli School of Engineering and Applied Science, and John Delaney, a senior imaging scientist at the National Gallery.

“Our approach will revolutionize the way important and irreplaceable archaeological materials are analyzed and interpreted,” said Kakoulli, co-director of UCLA’s Molecular and Nano Archaeology Laboratory and a member of the UCLA/Getty Conservation Program.

“Without even taking a minute sample from the painting, we mapped out detailed information that tells us exactly what materials were used, and how they were prepared,” she said. “We were also able to link their production technology to other ancient ‘industries’ and practices, such as mining, metallurgy, pottery, dyeing, pharmacopeia and alchemy.”

The painting they examined is from the National Gallery’s collection. Measuring 35 centimeters tall by 12 centimeters wide, it depicts an Egyptian noblewoman and is a Fayum portrait, a type of painting that was attached to mummies of that time and believed to depict the image of a real person.

The analysis revealed the molecular and elemental composition of the paint and the medium used to bind the paint: The scientists discovered that the painting was made using encaustic — a technique that uses a mixture of pigment and melted beeswax that is “burned in” on a wooden base. The research also offers insights into fashions and artistic methods popular at the time.

“The decoration of her garment is an excellent example of craftsmanship in real life being reflected within the painting,” said Roxanne Radpour, a UCLA graduate student and a co-author of the study. “Madder dye extracted from roots was often used to color textiles and leather in ancient Egypt, and we see from the chemical mapping of the portrait that the artist chose to paint the noblewoman’s dress with madder lake pigment, thus imitating contemporary practices.”

Delaney said the project’s goal was to examine how useful the new imaging methods would be for studying archeological objects like Fayum paintings.

“We had originally developed the three imaging modalities to examine fine art paintings and works on paper,” he said. “The results, when interpreted by experts of artist material from this time period, show a complete picture of how the object fabricated emerges. We hope such multimodal imaging methods become the basis for futures studies of such early polychrome objects.”

Kakoulli said the new approach could potentially be used in other disciplines such as environmental, geological, biological and forensic sciences.

The study’s other author was Kathryn Dooley, a research scientist at the National Gallery.
on January 25, 2018