Every galaxy harbours a supermassive black hole at its center. A new computer model now shows how these gravity monsters influence the large-scale structure of our universe.

The IllustrisTNG project is an ongoing series of large, cosmological magnetohydrodynamical simulations of galaxy formation. TNG aims to illuminate the physical processes that drive galaxy formation: to understand when and how galaxies evolve into the structures that are observed in the night sky, and to make predictions for current and future observational programs.\

Time evolution of the cosmic magnetic field strength. Blue/purple shows regions of low magnetic energy along filaments of the cosmic web, whereas orange and white indicate regions with significant magnetic energy inside halos and galaxies. The displayed region is taken from the TNG100 simulation and is 10 megaparsec wide.

The research team includes scientists from the Heidelberg Institute for Theoretical Studies (HITS), Heidelberg University, the Max-Planck-Institutes for Astronomy (MPIA, Heidelberg) and for Astrophysics (MPA, Garching), US universities Harvard and the Massachusetts Institute of Technology (MIT), as well as the Center for Computational Astrophysics in New York.

The project, "Illustris - The Next Generation" (IllustrisTNG), is the most complete simulation of its kind to date. Based on the basic laws of physics, the simulation shows how our cosmos evolved since the Big Bang. Adding to the predecessor Illustris project, IllustrisTNG includes some of the physical processes which play a crucial role in this evolution for the very first time in such an extensive simulation. First results of the IllustrisTNG project have now been published in three articles in the journal Monthly Notices of the Royal Astronomical Society.

Visualization of the intensity of shock waves in the cosmic gas (blue) around collapsed dark matter structures (orange/white). Similar to a sonic boom, the gas in these shock waves is accelerated with a jolt when impacting on the cosmic filaments and galaxies. 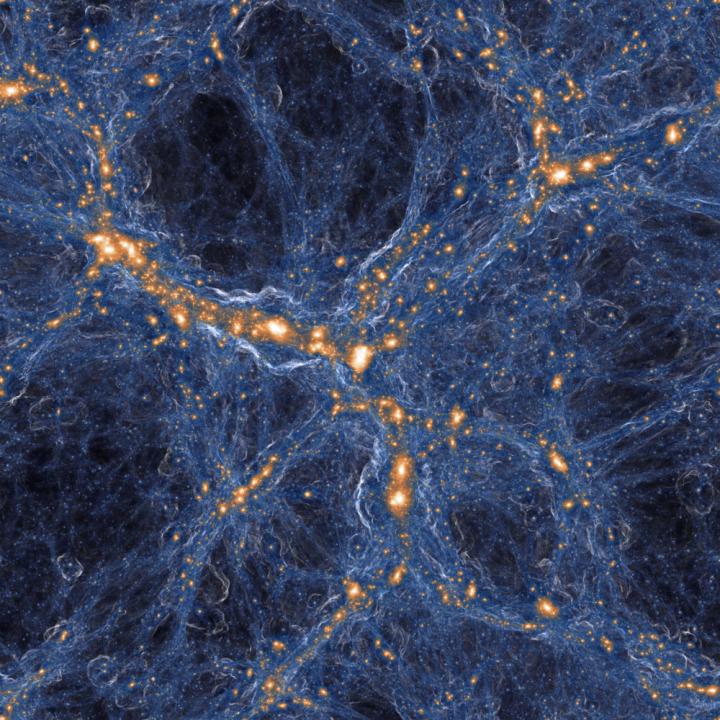 These findings should help to answer fundamental questions in cosmology.

A realistic universe out of the computer

At its intersection points, the cosmic web of gas and dark matter predicted by IllustrisTNG hosts galaxies quite similar to the shape and size of real galaxies. For the first time, hydrodynamical simulations could directly compute the detailed clustering pattern of galaxies in space. Comparison with observational data - including newest large surveys - demonstrate the high degree of realism of IllustrisTNG.

In addition, the simulations predict how the cosmic web changes over time, in particular in relation to the underlying "back bone" of the dark matter cosmos. "It is particularly fascinating that we can accurately predict the influence of supermassive black holes on the distribution of matter out to large scales," says principal investigator Prof. Volker Springel (HITS, MPA, Heidelberg University). "This is crucial for reliably interpreting forthcoming cosmological measurements."

TNG100-1: Fullbox composite which combines gas temperature (as the color) and shock mach number (as the brightness). Red indicates 10 million Kelvin gas at the centers of massive galaxy clusters, while bright structures show diffuse gas from the intergalactic medium shock heating at the boundary between cosmic voids and filaments.

The most important transformation in the life cycle of galaxies

In another study, Dr. Dylan Nelson (MPA) was able to demonstrate the important impact of black holes on galaxies. Star-forming galaxies shine brightly in the blue light of their young stars until a sudden evolutionary shift ends the star formation, such that the galaxy becomes dominated by old, red stars, and joins a graveyard full of "red and dead" galaxies. "The only physical entity capable of extinguishing the star formation in our large elliptical galaxies are the supermassive black holes at their centers," explains Nelson. "The ultrafast outflows of these gravity traps reach velocities up to 10 percent of the speed of light and affect giant stellar systems that are billions of times larger than the comparably small black hole itself."

Thin slice through the cosmic large-scale structure in the largest simulation of the IllustrisTNG project. The image brightness indicates the mass density and colour visualizes the mean gas temperature of ordinary ("baryonic") matter. The displayed region extends by about 1.2 billion light-years from left to right. The underlying simulation is presently the largest magneto-hydrodynamic simulation of galaxy formation, containing more than 30 billion volume elements and particles. 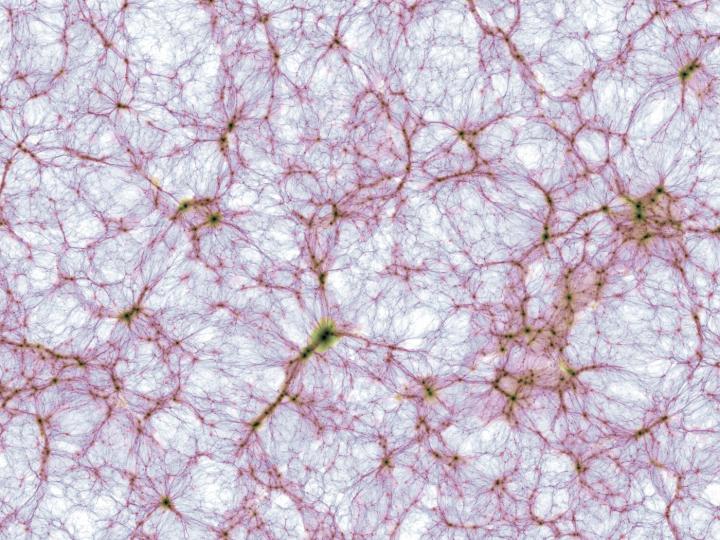 Where the stars sparkle: New findings for the structures of galaxies

IllustrisTNG also improves researchers´ understanding of the hierarchical structure formation of galaxies. Theorists argue that small galaxies should form first, and then merge into ever larger objects, driven by the relentless pull of gravity. The numerous galaxy collisions literally tear some galaxies apart and scatter their stars onto wide orbits around the newly created large galaxies, which should give them a faint background glow of stellar light. These predicted pale stellar halos are very difficult to observe due to their low surface brightness, but IllustrisTNG was able to simulate exactly what astronomers should be looking for in their data.

"Our predictions can now be systematically checked by observers," Dr. Annalisa Pillepich (MPIA) points out, who led a further IllustrisTNG study. "This yields a critical test for the theoretical model of hierarchical galaxy formation."

Astrophysics with a special code and a supercomputer

For the project, the researchers developed a particularly powerful version of their highly parallel moving-mesh code AREPO and used it on the Hazel Hen machine at the High-Performance Computing Center Stuttgart, Germany's fastest mainframe computer, currently ranked nineteenth in the Top500. IllustrisTNG is the largest hydrodynamic simulation project to date for the emergence of cosmic structures. To compute one of the two main simulation runs, over 24,000 processors were used over the course of more than two months to follow the formation of millions of galaxies in a representative region of the universe with nearly one billion light-years on a side.

Rendering of the gas velocity in a thin slice of 100-kiloparsec thickness (in the viewing direction), centered on the second most massive galaxy cluster in the TNG100 calculation. Where the image is black, the gas is hardly moving, while white regions have velocities which exceed 1,000 kilometers per second. The image contrasts the gas motions in cosmic filaments against the fast, chaotic motions triggered by the deep gravitational potential well and the supermassive black hole sitting at its center. 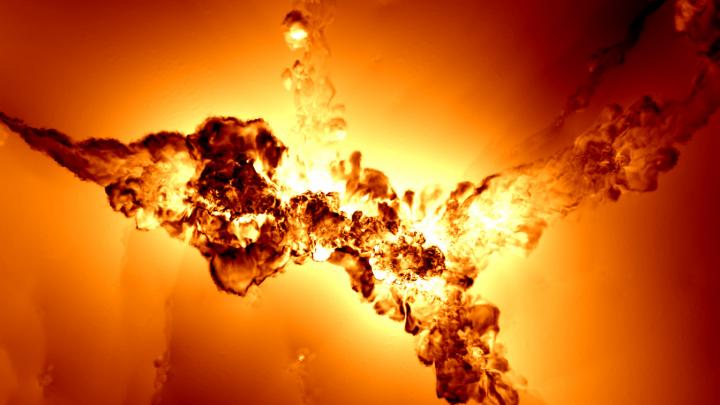 "Thanks to the computing time obtained from the German Gauss Centre for Supercomputing, we have been able to redefine the state of the art in this field," explains Volker Springel. "The new simulations produced more than 500 terabytes of simulation data. Analyzing this huge mountain of data will keep us busy for years to come, and it promises many exciting new insights into different astrophysical processes."

The stellar content of the Universe on the largest scales: a projection of the distribution of stars across a 50 Mpc region of space. Taken from the TNG100-1 simulation at the present day (z=0)