Archaeologists are a little like forensic investigators: They scour the remains of past societies, looking for clues in pottery, tools and bones about how people lived, and how they died.

And just as detectives might re-create the scene of a crime, University of Washington archaeologists have re-created the weapons used by hunter-gatherers in the post-Ice Age Arctic some 14,000 years ago. Looking for clues as to how those early people advanced their own technology, researchers also considered what that might tell us about human migration, ancient climates and the fate of some animal species.

In an article published Jan. 31 in the Journal of Archaeological Science, Janice Wood, recent UW anthropology graduate, and Ben Fitzhugh, a UW professor of anthropology, show how they reconstructed prehistoric projectiles and points from ancient sites in what is now Alaska and studied the qualities that would make for a lethal hunting weapon.

In an article published Jan. 31 in the Journal of Archaeological Science, Janice Wood, recent UW anthropology graduate, and Ben Fitzhugh, a UW professor of anthropology, show how they reconstructed prehistoric projectiles and points from ancient sites in what is now Alaska and studied the qualities that would make for a lethal hunting weapon.

The UW team chose to study hunting weapons from the time of the earliest archaeological record in Alaska (around 10,000 to 14,000 years ago), a time that is less understood archaeologically, and when different kinds of projectile points were in use. Team members designed a pair of experiments to test the effectiveness of the different point types. By examining and testing different points in this way, the team has come to a new understanding about the technological choices people made in ancient times. 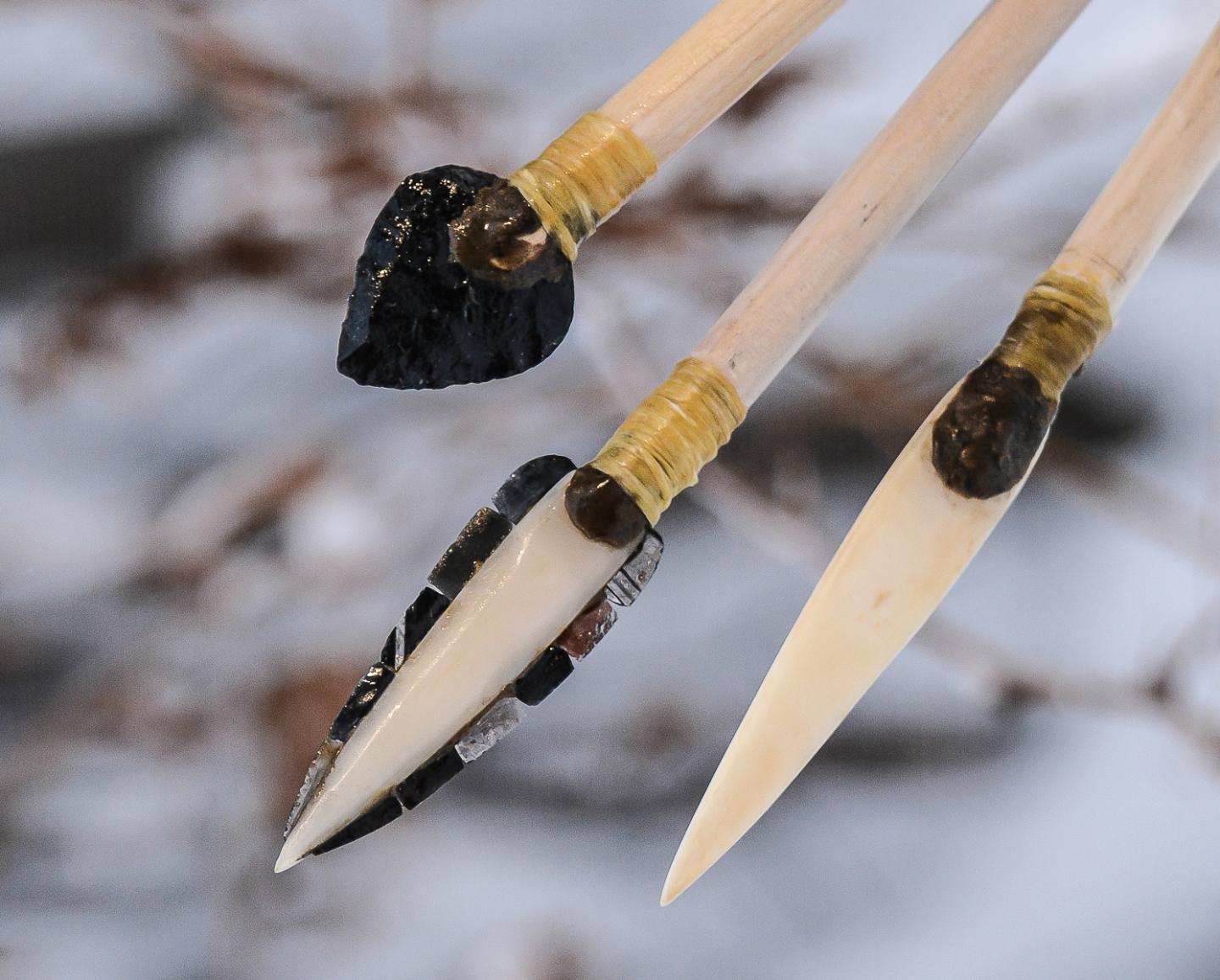 “The hunter-gatherers of 12,000 years ago were more sophisticated than we give them credit for,” Fitzhugh said. “We haven’t thought of hunter-gatherers in the Pleistocene as having that kind of sophistication, but they clearly did for the things that they had to manage in their daily lives, such as hunting game. They had a very comprehensive understanding of different tools, and the best tools for different prey and shot conditions.”

Prior research has focused on the flight ballistics of the hunting weapons in general, and no prior study has looked specifically at the ballistics of tools used in Siberia and the Arctic regions of North America just after the Ice Age. In addition to foraging for plants and berries (when available), nomadic groups hunted caribou, reindeer and other animals for food, typically with spears or darts (thrown from atlatl boards). Without preservation of the wood shafts, these tools are mainly differentiated in the archaeological record by their stone and bone points. But it was not known how effective different kinds of points were in causing lethal injury to prey.

Nor is it known, definitively, whether different types of points were associated with only certain groups of people, or whether with the same groups used certain point types to specialize on particular kinds of game or hunting practices. It is generally accepted that different point types were developed in Africa and Eurasia and brought to Alaska before the end of the Ice Age. These included rudimentary points made of sharpened bone, antler or ivory; more intricate, flaked stone tips popularly familiar as “arrowheads”; and a composite point made of bone or antler with razor blade-like stone microblades embedded around the edges.

The three likely were invented at separate times but remained in use during the same period because each presumably had its own advantages, Wood said. Learning how they functioned informs what we know about prehistoric hunters and the repercussions of their practices.

So Wood traveled to the area around Fairbanks, Alaska, and crafted 30 projectile points, 10 of each kind. She tried to stay as true to the original materials and manufacturing processes as possible, using poplar projectiles, and birch tar as an adhesive to affix the points to the tips of the projectiles. While ancient Alaskans used atlatls (a kind of throwing board), Wood used a maple recurve bow to shoot the arrows for greater control and precision.

For the bone tip, modeled on a 12,000-year-old ivory point from an Alaskan archaeological site, Wood used a multipurpose tool to grind a commercially purchased cow bone;

For the stone tip, she used a hammerstone to strike obsidian into flakes, then shaped them into points modeled on those found at another site in Alaska from 13,000 years ago;


And for the composite microblade tip -- modeled microblade technologies seen in Alaska since at least 13,000 years ago and a rare, preserved grooved antler point from a more recent Alaskan site used more than 8,000 years ago -- Wood used a saw and sandpaper to grind a caribou antler to a point. She then used the multipurpose tool to gouge out a groove around its perimeter, into which she inserted obsidian microblades.

Wood then tested how well each point could penetrate and damage two different targets: blocks of ballistic gelatin (a clear synthetic gelatin meant to mimic animal muscle tissue) and a fresh reindeer carcass, purchased from a local farm. Wood conducted her trials over seven hours on a December day, with an average outdoor temperature of minus 17 degrees Fahrenheit.

In Wood's field trial, the composite microblade points were more effective than simple stone or bone on smaller prey, showing the greatest versatility and ability to cause incapacitating damage no matter where they struck the animal's body. But the stone and bone points had their own strengths: Bone points penetrated deeply but created narrower wounds, suggesting their potential for puncturing and stunning larger prey (such as bison or mammoth); the stone points could have cut wider wounds, especially on large prey (moose or bison), resulting in a quicker kill.

Wood said the findings show that hunters during this period were sophisticated enough to recognize the best point to use, and when. Hunters worked in groups; they needed to complete successful hunts, in the least amount of time, and avoid risk to themselves.

"We have shown how each point has its own performance strengths," she said. Bone points punctured effectively, flaked stone created a greater incision, and the microblade was best for lacerated wounds. "It has to do with the animal itself; animals react differently to different wounds. And it would have been important to these nomadic hunters to bring the animal down efficiently. They were hunting for food."

Weapon use can shed light on the movement of people and animals as humans spread across the globe and how ecosystems changed before, during and after the ice ages.

"The findings of our paper have relevance to the understanding of ballistic properties affecting hunting success anywhere in the world people lived during the 99 percent of human history that falls between the invention of stone tools more than 3 million years ago in Africa and the origins of agriculture," Fitzhugh said.

It could also inform debates on whether human hunting practices directly led to the extinction of some species. The team's findings and other research show that our ancestors were thinking about effectiveness and efficiency, Wood said, which may have influenced which animals they targeted. An animal that was easier to kill may have been targeted more often, which could, along with changing climates, explain why animals such as the horse disappeared from the Arctic. A shot to the lung was lethal for early equines, Wood said, but a caribou could keep going.

"I see this line of research as looking at the capacity of the human brain to come up with innovations that ultimately changed the course of human history," she said. "This reveals the human capacity to invent in extreme circumstances, to figure out a need and a way to meet that need that made it easier to eat and minimized the risk."

Upon completion of the experiment, the bones were sterilized for future study of projectile impact marks.