The animals are getting restless.  They are running out of room to roam.

Human beings take up a lot of real estate -- around 50-70 percent of the Earth's land surface. And our increasing footprint affects how mammals of all sizes, from all over the planet, move.

A study recently published by Science found that, on average, mammals living in human-modified habitats move two to three times less far than their counterparts in areas untouched by humans. What's more, this pattern persists globally: from African forest elephants to white-tailed antelope squirrels in North America, the human footprint infringes upon the footprints of mammal species both big and small.

The study, led by Marlee Tucker of the Senckenberg Biodiversity and Climate Research Centre in Germany, is the first of its kind to log movement behaviors for such a wide range of mammals globally.

One of the lions in Tsavo, Kenya, whose movements were tracked for this study. 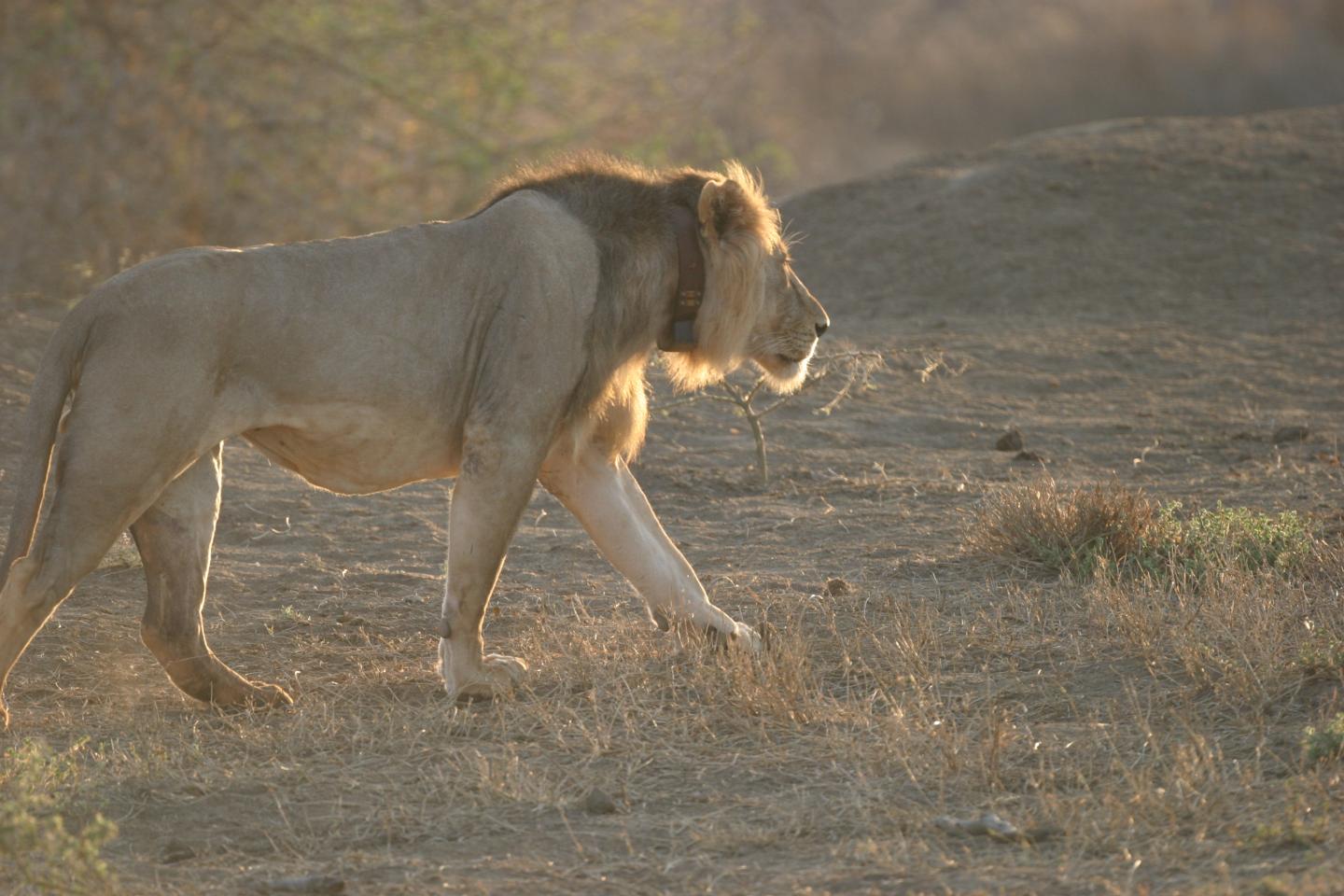 "All organisms need space," Bruce Patterson, a co-author of this study and MacArthur Curator of Mammals at The Field Museum in Chicago, explained. "They need space to gather their resources, find mates, and perform their ecological services." For instance, bats need room to find and consume insects and pollinate plants (which amount to $3.5 to 50 billion worth of agricultural labor annually in the US alone), and apex predators need room to hunt and control other species' populations.

In the study, more than 100 researchers contributed information on 803 individual mammals representing 57 species in total. Patterson offered up data on the movement of lions in a pristine wilderness area of Tsavo, Kenya. From 2002-09, he followed three lions using high-tech collars that continuously tracked individuals' movement via GPS -- the data he contributed to the Science study. One of those lions, in its natural habitat, patrolled an area twice the size of Chicago (1400 km2) to find food, attract mates, and repel intruders.

But habitat loss and fragmentation disrupt these critical animal behaviors. Clearing rainforest is an example of habitat loss -- the destruction and loss of usable area for a given species. Constructing a road through the savannah, on the other hand, constitutes habitat fragmentation -- the division of habitat area into smaller, discontinuous spaces. When suitable habitat spaces become too small or too isolated, animals can no longer afford to visit them, changing their space use.

As habitats become compromised, resources like food and living space that animals rely on become scarce. Sometimes, when resources are limited, animals traverse larger areas to get what they need -- if there's not enough food in a five-mile radius, they might move to a ten-mile radius. However, this study shows that on the whole, that sort of additional movement tends not to be an option -- if there's no uninterrupted landscape available, then the affected animals simply can't live there.''

One of the lions in Tsavo, Kenya, whose movements were tracked for this study. 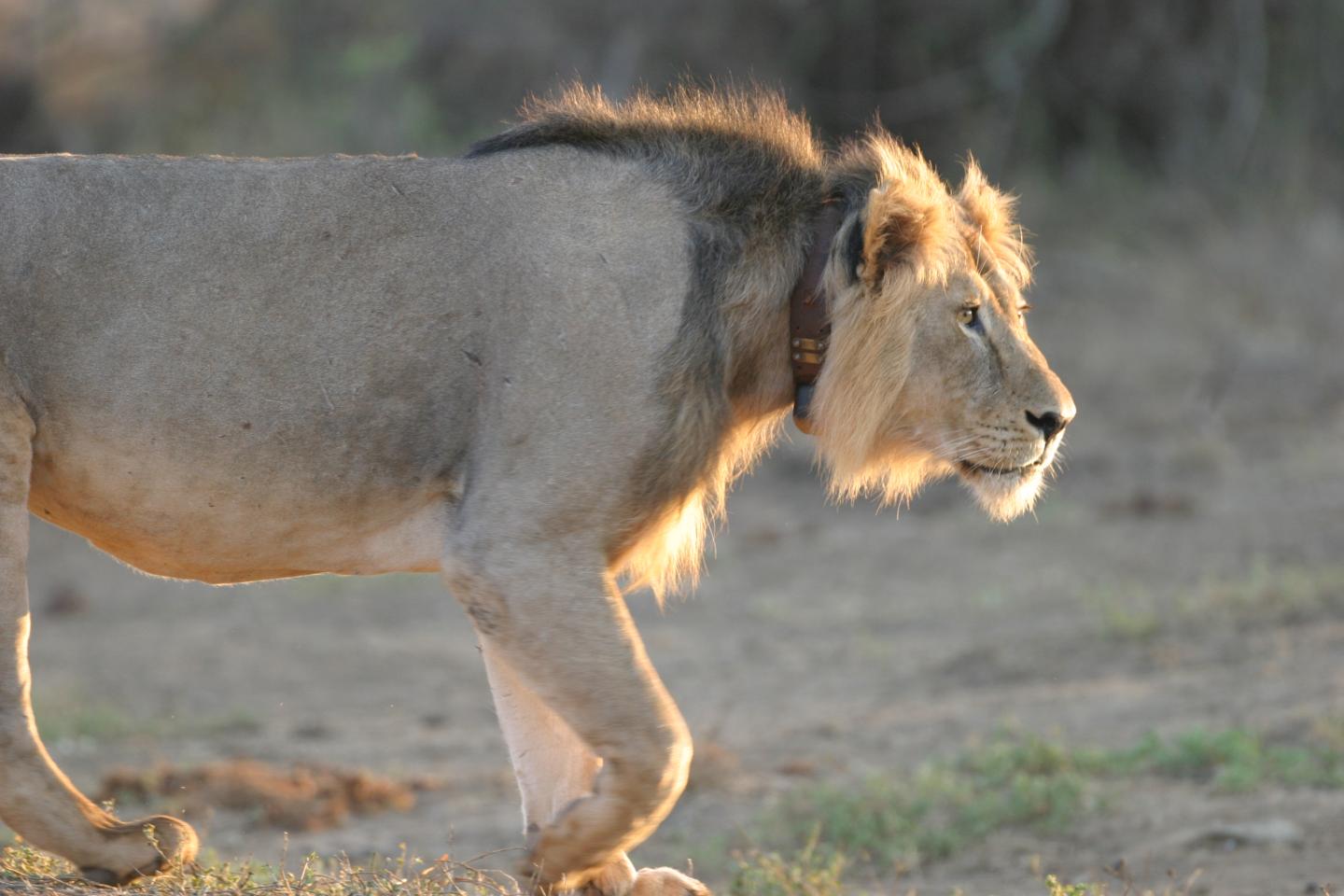 To that end, the Science study found "strong negative effects of the human footprint on median and long-distance displacements of terrestrial mammals." Patterson put it more simply: "Human dominion over Earth's landscapes gets in the way of animals doing their thing." Some species, like mice, can make do with less room, but animals that need lots of space, like lions, tigers, and elephants, simply can't live in areas with lots of humans.

"It is important that animals move, because in moving they carry out important ecological functions like transporting nutrients and seeds between different areas. Additionally, mammalian movements bring different species together and thus allow for interactions in food webs that might otherwise not occur. If mammals move less this could alter any of these ecosystem functions," says lead author Marlee Tucker.

Across the wide array of species its data encompasses, the study points to a singular, and grim, conclusion: For mammal species, the effects of habitat loss and habitat fragmentation don't discriminate by geographic location, body size, or where that species sits on the food chain -- the human footprint threatens most other mammals.

Still, Patterson remains hopeful that the Science study can guide further research and change our approach to human land use. "Ultimately, it would be good to know whether there are critical thresholds in the human footprint for the species living around us. Are there specific points beyond which resources become limiting and species are excluded?" he asked. "As we continue to transform the landscape and as the human population expands, we're limiting the space and resources that other mammals need to live."

Contacts and sources:
Angelica Lasala
The Field Museum
on January 26, 2018