How Lazy Fat Cats Can Safely Loose Weight: It Won't Be Easy

Does your cat lay around all day, only getting up to eat and visit the litter box? Chances are, he’s overweight. Maybe you’ve switched to the “diet” cat food or tried feeding him less, but you might have noticed it’s not easy to get that weight off. A new study from the University of Illinois explains what it takes to get kitty to slim down.

“The intent with this diet was a healthy weight loss: getting rid of fat while maintaining lean mass. The big question was how much does it take to make cats lose weight, especially lazy neutered males? It turns out you have to keep reducing their food intake because they’re not very active. It takes a long time,” says Kelly Swanson, Kraft Heinz Company Endowed Professor in Human Nutrition in the Department of Animal Sciences and the Division of Nutritional Sciences at U of I.

Swanson and his colleagues wanted to target a safe level of weight loss – enough to notice a change, but not enough to cause health problems. “The risk with rapid weight loss, especially in a cat, is hepatic lipidosis. The body releases too much fat, and the liver gets bogged down. They can’t handle that much,” Swanson says. “We targeted a 1.5 percent body weight loss per week, which falls in line with the range (0.5-2 percent per week) suggested by the American Animal Hospital Association.”

To achieve that 1.5 percent loss, the researchers had to cut food intake by 20 percent compared to a maintenance diet. But that was only the first reduction. Swanson and his colleagues found that to achieve continued weight loss, they had to keep cutting intake every week.

“That’s a key point. When we go on a diet ourselves, we might lose a lot of weight in the first few weeks and then hit a road block. Same with these animals. We had to keep going down, but it can be hard to convince a pet owner to do that. You might get owners to reduce intake from 60 to 50 grams per day, but we’re telling them they might have to go to 45 or 40 grams. We got really low, but we were monitoring them so they were healthy,” he says. 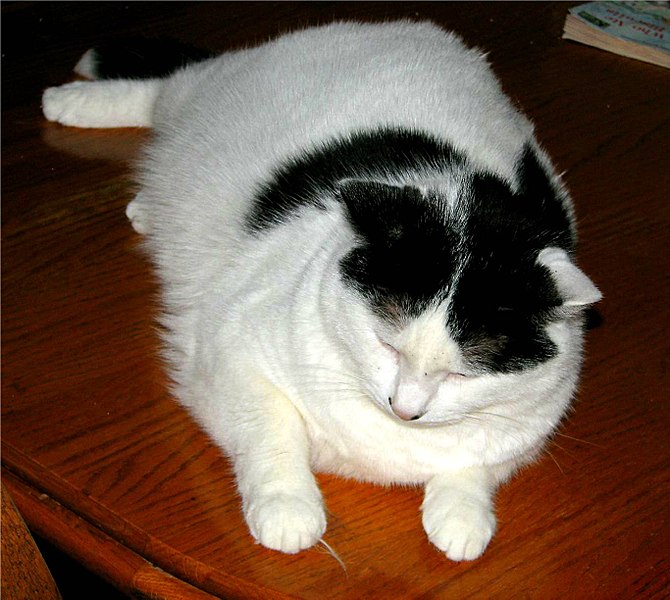 The goal was a healthy body condition score of 5 on a 9-point scale. An animal with a BCS of 1 is very emaciated, but one with a score of 9 is, as Swanson puts it, “like a little blimp.” An animal with an ideal BCS of 5 has a little layer of fat on the ribs, but has a tuck at the waist.

As hard as it may be to convince owners to reduce their cats’ food intake, it might be harder to convince them that their pets are overweight in the first place.

“We’ve done some clinical studies in dogs showing that misconception. If you have a veterinarian do a BCS assessment of a pet and then have an owner do it, the owner will almost always underestimate the BCS. Owners need to acknowledge the weight status of their pets.

“The second thing that needs to change is the owner’s behavior: getting them to reduce food intake to maintain a healthy BCS. Food companies recognize that many owners feed too much, so they’re trying to formulate their diets so it’s easier for the animals to maintain or lose weight even if an owner overfeeds,” Swanson says. 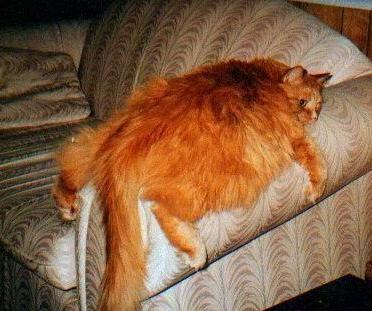 The researchers also evaluated changes in the cats’ fecal microbiota – or bacteria, fungi, and viruses that inhabit the gut – during the 18-week study. As the weight came off, some bacterial groups became more abundant, while others showed the opposite pattern. Swanson thinks the shifts may lead to positive health effects for the cats, such as lower inflammation, but he is waiting for additional results before making that call.

With the idea that they might have a little more pep in their step as they got leaner, the researchers also measured the cats’ voluntary physical activity during the experiment. The eight cats in the study, all neutered males, were housed together in a large room for 20 to 22 hours every day, only going back to their individual cages to be fed. Researchers attached activity monitors to the cats’ collars to see how often they were running, playing with toys, or climbing the cat towers around the room.

“Their activity level didn’t change much,” Swanson says. “Toward the end, they were becoming a little more active, but not statistically.” Still, he recommends owners encourage their cats to exercise as much as possible, by playing with them and placing food bowls farther away from favorite resting spots.

The article, “Effects of weight loss while feeding a moderate-protein, high-fiber diet on body composition, voluntary physical activity, and fecal microbiota of overweight cats,” is published in the American Journal of Veterinary Research. Co-authors Marissa Pallotto, Maria de Godoy, and Hannah Holscher are from U of I. Co-author Preston Buff is from The Nutro Company. The project was supported in part by The Nutro Company.