Horses with Five Toes : New Theory on the Missing Digits

Scientists have long wondered how the horse evolved from an ancestor with five toes to the animal we know today.

While it is largely believed that horses simply evolved with fewer digits, researchers at New York Institute of Technology College of Osteopathic Medicine (NYITCOM) pose a new theory that suggests remnants of all five toes are still present within the hooves of the horse.

Humans and horses are descendants of a common ancestor with five digits. As horses evolved to live on open grassland their anatomy required a more compact design to enable movement across the hard plains.

Until now, scientists believed horses adapted to these conditions by gradually evolving with fewer digits than its five-toed ancestor, with the first horse retaining only four digits, its later descendant reduced to three, and today's horse retaining just the central digit known as the metacarpal, the long bone above the hoof.

Silhouettes show Mesohippus primigenium, an early ancestor of the modern horse that lived 40 million years ago and was previously believed to have three toes, and the modern horse. Photographs of both animals' hand bones appear alongside renderings of the researchers' proposed digit identities.
The researchers argue that missing digits one and five are partially expressed on the surfaces of the side toes (shown in red/blue). While the horse is described as being monodactyl, with only one complete digit, the researchers demonstrate that digits two and four are expressed as the splint bones and frog (padding of the foot), as shown in yellow/green. Missing digits one and five are expressed as ridges on the splint bones and as the hoof cartilages, as shown in the lower red/blue areas. 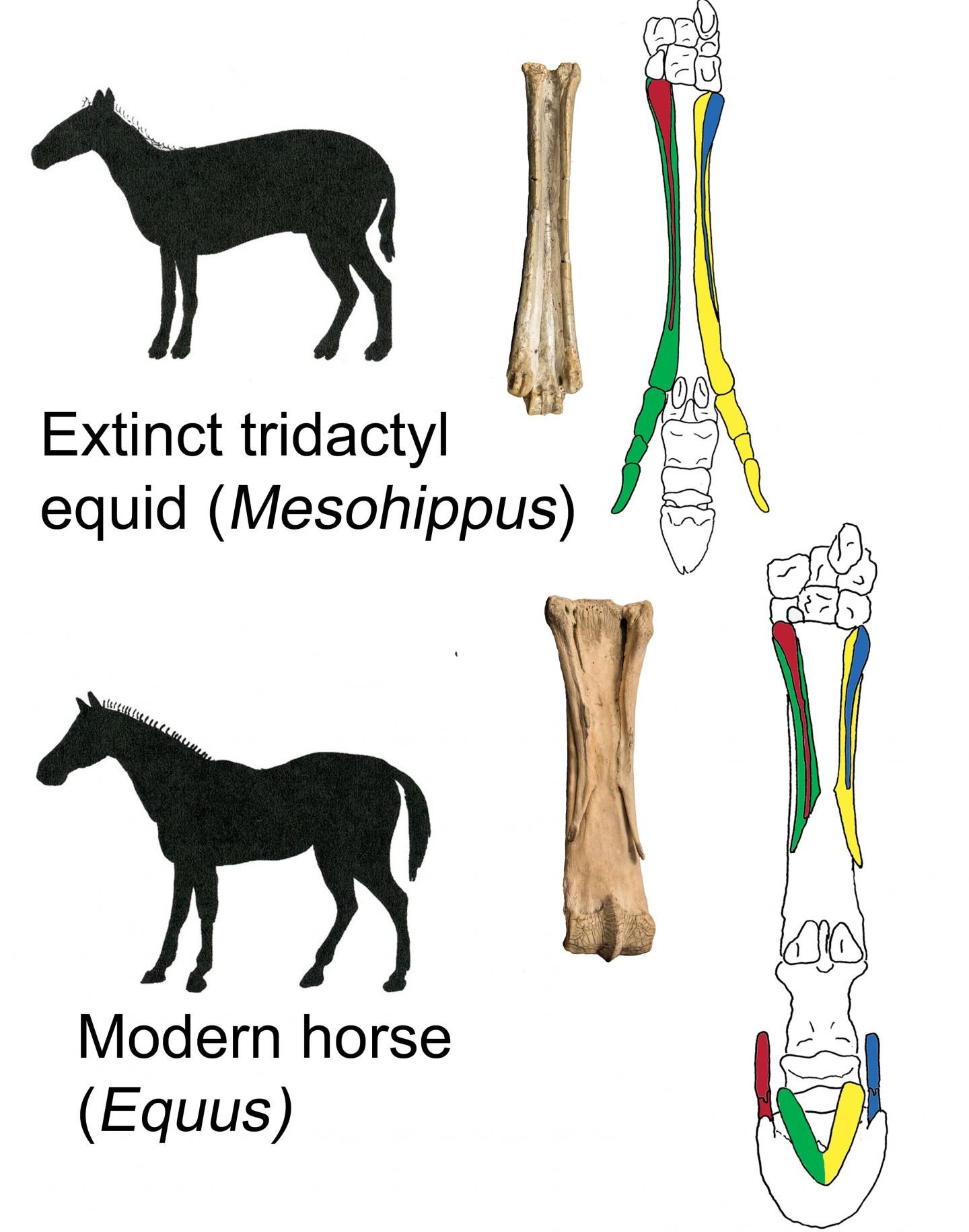 For the first time, as published in the January 24 issue of Royal Society Open Science, NYITCOM researcher, Nikos Solounias, Ph.D., paleontologist and anatomy professor, and a team of researchers propose that the reduction in the number of digits is not a matter of simple attrition; instead, they believe that all five digits have merged to form the compacted forelimbs with hooves that we know today.

Currently, scientists accept that splints, small bones found along the outer sides of the metacarpal in modern horses, are partially formed remnants of second and fourth digits. Tapering mid-way down the metacarpal, these fragments were inherited from an earlier ancestor, but ceased to develop into fully formed digits in modern horses.

While the NYITCOM researchers note that this explanation of the second and fourth digits is viable, they argue that it is incomplete and fails to account for the animal's first and fifth digits. Arguing that the horse is not truly monodactyl, that is, one-toed, these researchers contend that fragments of the "missing" digits can be found in the form of ridges on the backside of the splints. According to the researchers, this demonstrates that the first and fifth digits were not simply lost to evolution, but attached to their neighboring second and fourth digits.

Back view of 40 million-year-old Mesohippus' metacarpal. While three fully formed toes are visible, the researchers contend that ridges on the side of the toes represent the two missing digits, and that therefore, all 5 digits are expressed.

"With a distinct surface from the metacarpal, we know the splints on today's horses to be the remnants of the second and fourth digits," said Solounias. "However, these partially formed digits also appear to contain their own elevated surfaces which hold additional evolutionary clues. We find these ridges, located on the posterior of each splint, to be the partially formed remains of the first and fifth digits, which were once connected to the cartilages of the hoof."

Solounias first considered this theory in 1999 while studying fossil evidence from an eight-million-year-old horse known as Hipparion primigenium. The famous Laetoli footprints in Tanzania demonstrate Hipparion walked alongside early humans, and was believed to have had three digits. However, Solounias noticed that the bottom surface of Hipparion's fossilized forelimb appeared to be divided in five sections, as though small toes had bonded together. After further studying images of the Laetoli footprints, he confirmed his finding in several of the impressions, and considered that Hipparion not only had five compacted toes, but likely passed this trait on to its descendants.

Bottom of fossilized forelimb with five surfaces of differing texture, which suggests five digits are still present on today's horse. 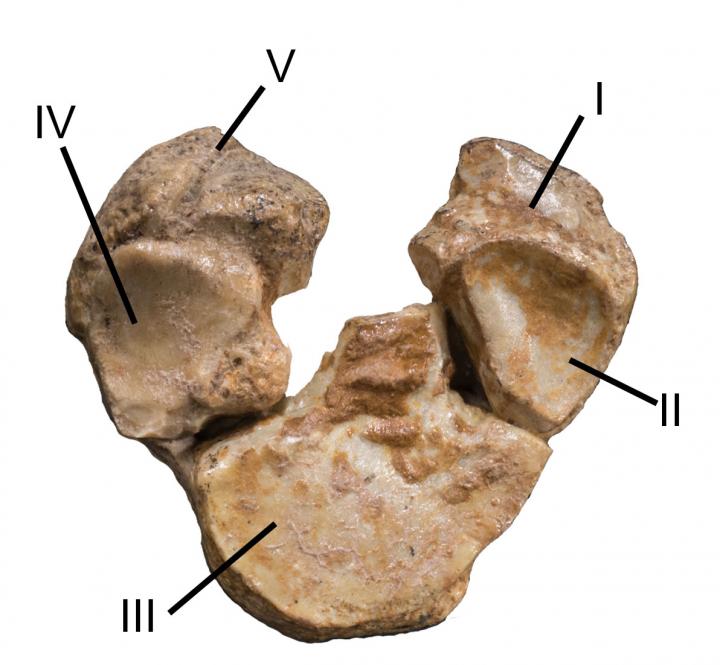 
"Interestingly, we not only find hints of the missing digits on the modern horse, but also its ancestors, such as Hipparion and Mesohippus, two species believed to have three toes," said Solounias.

Melinda Danowitz, D.O., a recent NYITCOM graduate and Solounias' co-investigator in the study added, "While the horse's lineage is classically described as having evolved from four to three toes, and eventually one single toe, we show that its extinct ancestors exhibit the reduced toes both at the wrist and at the hoof. These findings show that today's horse is not truly monodactyl, and earlier ancestors were not in fact tridactyl or tetradactyl, that is, three-toed or four-toed."

The researchers have also discovered neurovascular evidence in support of the five-digit theory, with dissections of modern equine fetus forelimbs revealing a greater number of arteries and nerves than would be expected in a single digit.

"If today's horse does indeed have one digit per forelimb, we would expect each forelimb to have a total of two veins, two arteries, and two nerve bundles," said Danowitz. "However, our dissections found between five and seven neurovascular bundles per forelimb, suggesting that additional toes begin to develop, but do not become fully differentiated."

Following the study, the researchers anticipate that geneticists will use cellular DNA samples to test the theory.