Graphene Girders Could Double the Life of Rechargeable Lithium Batteries

Rechargeable life of lithium ion batteries doubles when anodes use graphene instead of graphite.

New research led by WMG, at the University of Warwick has found an effective approach to replacing graphite in the anodes of lithium-ion batteries using silicon, by reinforcing the anode's structure with graphene girders. This could more than double the life of rechargeable lithium-ion based batteries and also increase the capacity delivered by those batteries.

Graphite has been the default choice of active material for anodes in lithium--ion batteries since their original launch by Sony but researchers and manufacturers have long sought a way to replace graphite with silicon, as it is an abundantly available element with ten times the gravimetric energy density of graphite.

Unfortunately, silicon has several other performance issues that continue to limit its commercial exploitation. Due to its volume expansion upon lithiation silicon particles can electrochemically agglomerate in ways that impede further charge-discharge efficiency over time. Silicon is also not intrinsically elastic enough to cope with the strain of lithiation when it is repeatedly charged, leading to cracking, pulverisation and rapid physical degradation of the anode's composite microstructure. This contributes significantly to capacity fade, along with degradation events that occur on the counter electrode - the cathode. To use the mobile phones as an example, this is why we have to charge our phones for a longer and longer time, and it is also why they don't hold their charge for as long as when they are new.

This is a cross section of the Silicon and FLG together in an anode. 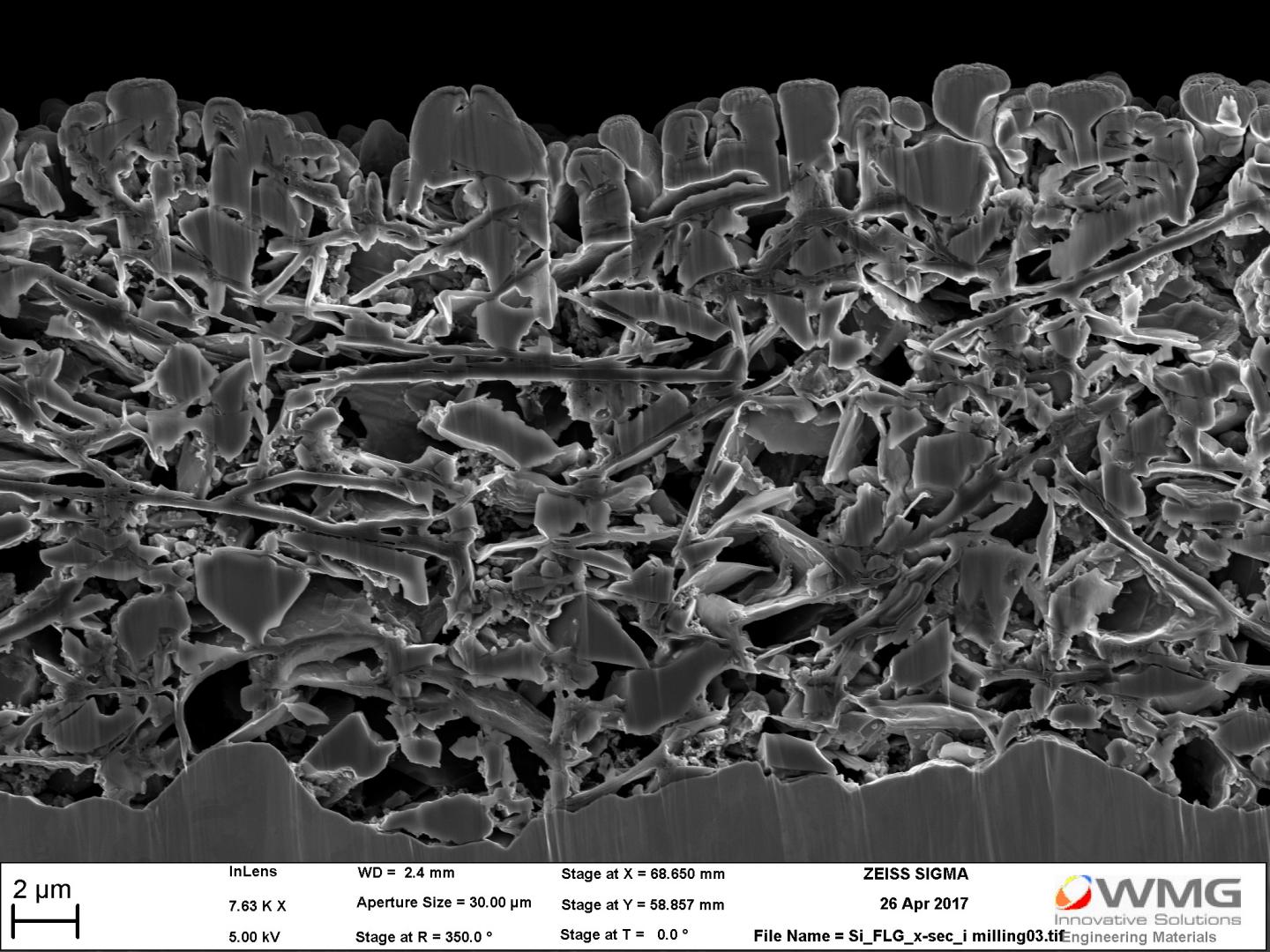 Numerous approaches have attempted to overcome these issues. The use of nano-sized / structured silicon particles with micron-sized graphene for example, but this has not proved satisfactory. Using nano-sized silicon particles dramatically increases the amount of reactive surface available. This leads to much more lithium being deposited on the silicon during the first charge cycle forming a solid-electrolyte interphase barrier between the silicon and the electrolyte and thus greatly reducing the lithium inventory and thus the battery's useful lifetime. This layer also continues to grow on silicon and so the lithium loss becomes continuous. Other methods of incorporating other materials such as graphene at different sizes have been deemed impractical to then progress to large-scale manufacture.

However new research, led by Dr Melanie Loveridge in WMG at the University of Warwick, has discovered, and tested, a new anode mixture of silicon and a form of chemically modified graphene which could resolve these issues and create viable silicon anode lithium-ion batteries. Such an approach could be practically manufactured on an industrial scale and without the need to resort to nano sizing of silicon and its associated problems. The new research has just been published on Tuesday 23rd January 2018) in Scientific Reports in a paper entitled Phase-related Impedance Studies on Silicon-Few Layer Graphene (FLG) Composite Electrode Systems. 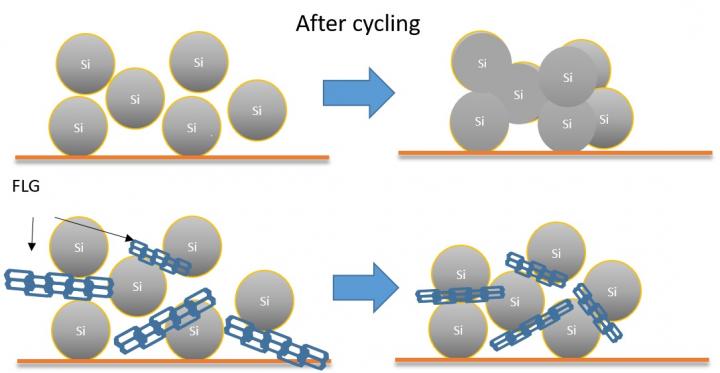 Graphene is of course a single, one atom thick layer of the mineral graphite (an allotrope of carbon). However, it also possible to separate and manipulate a few connected layers of graphene giving a material researchers refer to as few-layer graphene (FLG). Previous research has tested the use of FLG with nano-sized silicon but this new study has found that FLG can also dramatically improve the performance of larger micron-sized silicon particles when used in an anode. So much so that this mixture could significantly extend the life of lithium-ion batteries and also offer increased power capability.

The researchers created anodes that were a mixture of 60% micro silicon particles, 16% FLG, 14% Sodium/Polyacrylic acid, and 10% carbon additives, and then examined the performance (and the changes in structure of the material) over a 100 charge-discharge cycles .

Dr Melanie Loveridge, who led the research and is a Senior Research Fellow in WMG at the University of Warwick said:

"The flakes of FLG were mixed throughout the anode and acted like a set of strong, but relatively elastic, girders. These flakes of FLG increased the resilience and elasticity of the material greatly reducing the damage caused by the physical expansion of the silicon during lithiation. The graphene enhances the long range electrical conductivity of the anode and maintains a low resistance in a structurally stable composite."

"More importantly, these FLG flakes can also prove very effective at preserving the degree of separation between the silicon particles. Each battery charge cycle increases the chance that silicon particles become electrochemically welded to each other. This increased agglomeration increasingly reduces and restricts the electrolyte access to all the particles in the battery and impedes effective diffusion of lithium ions, which of course degrades the battery's life and power output. The presence of FLG in the mixture tested by the WMG University of Warwick led researchers to hypothesize that this phenomenon is highly effective in mitigating electrochemical silicon fusion. This has been supported by systematic investigations"

The WMG research team have already begun further work on this technological advance which will include further study and research as part of the graphene spearhead two year project led by Varta Micro-innovations, WMG at the University of Warwick is a partner along with Cambridge University, CIC, Lithops and IIT (Italian Institute of Technology).

The main goal of that project is to advance in pre-industrial production of silicon/graphene composites and their subsequent processing into lithium-ion batteries for high-energy and high-power applications. As part of that project WMG at Warwick will be optimising the electrode research, scale up and pouch cell manufacture of the optimised Li-ion batteries. You can find more details on this new work here: http://graphene-flagship.eu/project/Pages/About-Graphene-Flagship.aspx