Do Cells Rock Out? Is There a Healing Sound?

Can sound affect how your genes work?

Cells, the fundamental units of life, are equipped with a variety of environmental recognition systems. Aside from substances such as chemical signals, they can recognize and respond to pressure, gravity, temperature, and light. For example, the cells in your eyes reading this sentence are equipped with systems that are specialized to process light.

In a new PLOS ONE study, scientists from Kyoto University's Graduate School of Biostudies have shown that certain 'mechanosensitive' genes are suppressed when subjected to audible sound. Moreover, these effects vary depending on cell type, where some don't show any sensitivity.

"Much research has been done on these specialized cells, but nobody has looked into the cellular response to audible sound," explains Masahiro Kumeta, lead author of the study. "Sound is arguably the most important and ubiquitous environmental information we receive. So that brings up the question -- do cells recognize sound?"

Scientist from Kyoto University shown that certain 'mechanosensitive' genes are suppressed when subjected to audible sound, and these effects vary on cell type. 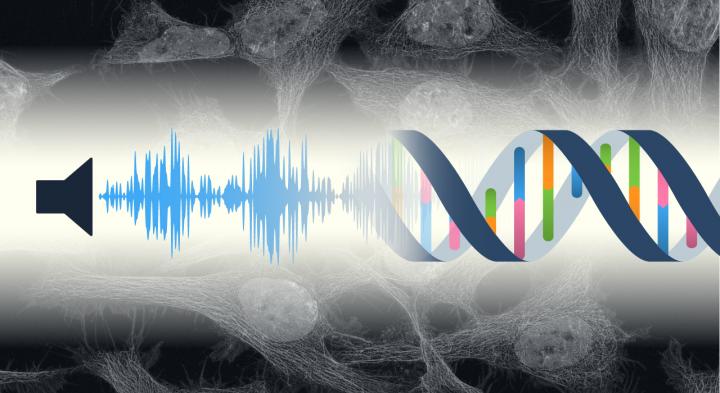 The team conducted their experiments by exposing a variety of cells types to different sounds and performed gene expression analyses over time, focusing on genes that are known to react to physical stimuli.

"One such gene we examined helps in bone formation, and is known to be upregulated with low-intensity ultrasound pulses," continues Kumeta. "The other genes were associated with wound healing and the extracellular matrix."

Series of cells were placed in an incubator outfitted with a full-range loudspeaker. After several hours of exposure to sounds with specific frequencies, expression levels of the target genes were analyzed.

The response was also dependent on waveforms and decibel levels. When exposing the cells to square or triangle waves, gene suppression was not as significant compared to sine waves on any tested frequency. Additionally, some genes did not show compounded suppression at higher decibels while others were reduced even further. Kumeta says this indicates that sound stimulation induces different responses in the cell.

The results also showed that such stimulations affect cells differently according to cell type. Cells that would eventually become bone or skeletal muscle showed the most suppression, while cells that had already differentiated had almost no response.

"Our research has found that audible sound stimulation leads to specific genetic responses," adds team leader Shige H Yoshimura. "These data also show that at least two mechanisms are involved: transcriptional control and RNA degradation. Both are key players in controlling how much proteins are made in the cell."

The team is planning to continue testing their hypotheses, as well as search for other genes that have been affected, such as ones that may have been upregulated by audio stimulation.

"Further studies using different sounds, cells, and experimental setups are sure to uncover more of this novel relationship between life and sound," continues Kumeta.

"In addition to the cellular level," concludes Yoshimura, "we will also focus on tissue- and organism-level effects to investigate the biological significance of sound response in living systems."