Cause of Mysterious Infrared Light Spread through Interstellar Space Identified

Astronomers using the Green Bank Telescope have made the first definitive interstellar detection of benzonitrile, an intriguing organic molecule that helps to chemically link simple carbon-based molecules and truly massive ones known as polycyclic aromatic hydrocarbons. This discovery is a vital clue in a 30-year-old mystery: identifying the source of a faint infrared glow that permeates the Milky Way and other galaxies.

Astronomers had a mystery on their hands. No matter where they looked, from inside the Milky Way to distant galaxies, they observed a puzzling glow of infrared light. This faint cosmic light, which presents itself as a series of spikes in the infrared spectrum, had no easily identifiable source. It seemed unrelated to any recognizable cosmic feature, like giant interstellar clouds, star-forming regions, or supernova remnants. It was ubiquitous and a bit baffling.

The likely culprit, scientists eventually deduced, was the intrinsic infrared emission from a class of organic molecules known as polycyclic aromatic hydrocarbons (PAHs), which, scientists would later discover, are amazingly plentiful; nearly 10 percent of all the carbon in the universe is tied up in PAHs.

The aromatic molecule benzonitrile was detected by the GBT in the Taurus Molecular Cloud 1 (TMC-1). 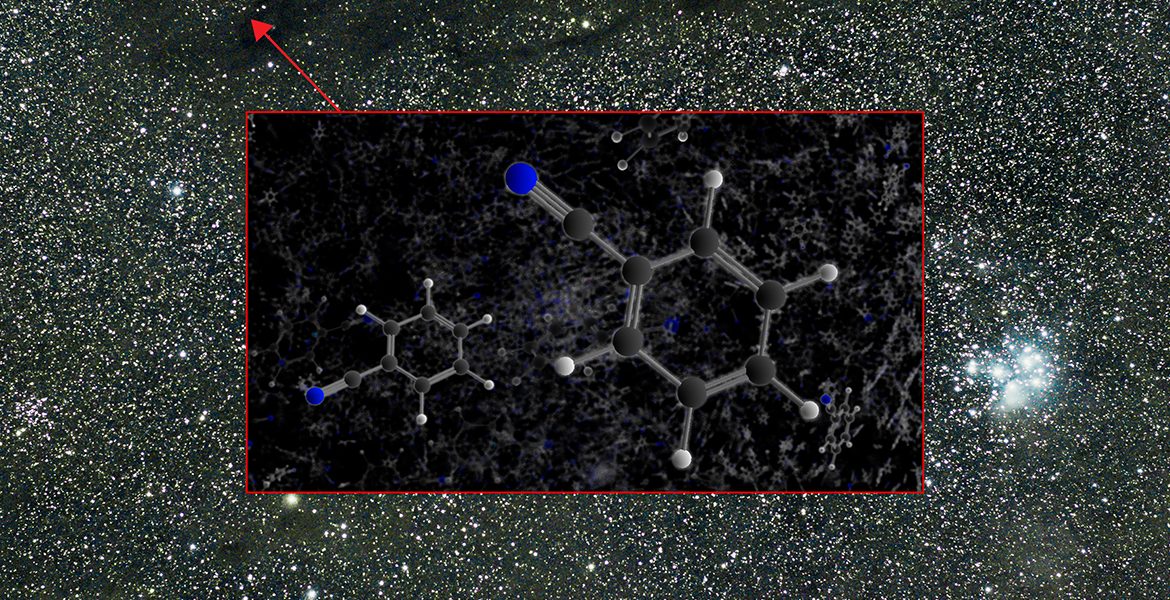 
Even though, as a group, PAHs seemed to be the answer to this mystery, none of the hundreds of PAH molecules known to exist had ever been conclusively detected in interstellar space.

New data from the National Science Foundation’s Green Bank Telescope (GBT) show, for the first time, the convincing radio fingerprints of a close cousin and chemical precursor to PAHs, the molecule benzonitrile (C₆H₅CN). This detection may finally provide the “smoking gun” that PAHs are indeed spread throughout interstellar space and account for the mysterious infrared light astronomers had been observing.

This image is part of the image comparison of the Taurus Molecular Cloud. 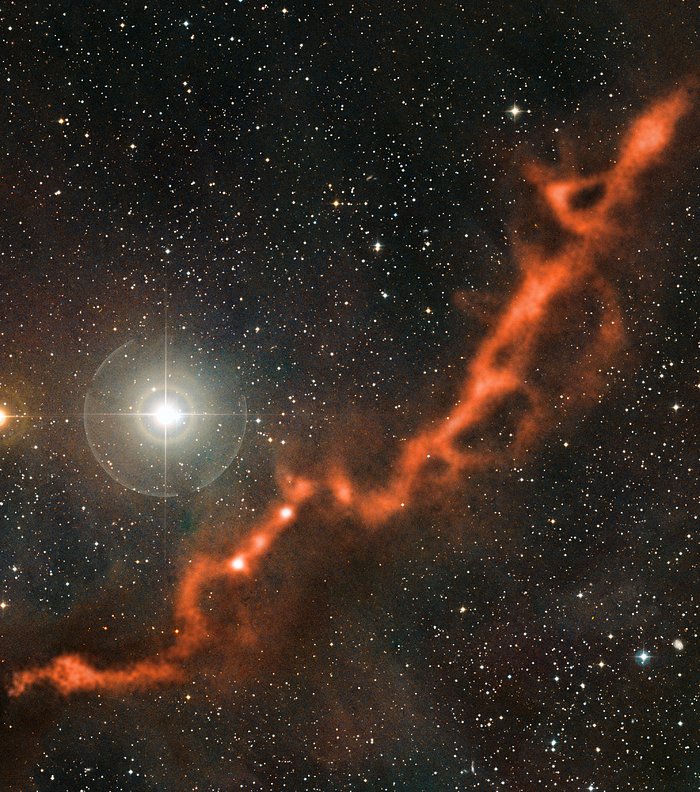 
The results of this study are presented today at the 231st meeting of the American Astronomical Society (AAS) in Washington, D.C., and published in the journal Science.

The science team, led by chemist Brett McGuire at the National Radio Astronomy Observatory (NRAO) in Charlottesville, Virginia, detected this molecule’s telltale radio signature coming from a nearby star-forming nebula known as the Taurus Molecular Cloud 1 (TCM-1), which is about 430 light-years from Earth.

“These new radio observations have given us more insights than infrared observations can provide,” said McGuire. “Though we haven’t yet observed polycyclic aromatic hydrocarbons directly, we understand their chemistry quite well. We can now follow the chemical breadcrumbs from simple molecules like benzonitrile to these larger PAHs.”

Though benzonitrile is one of the simplest so-called aromatic molecules, it is in fact the largest molecule ever seen by radio astronomy. It also is the first 6-atom aromatic ring (a hexagonal array of carbon atoms bristling with hydrogen atoms) molecule ever detected with a radio telescope.

While aromatic rings are commonplace in molecules seen here on Earth (they are found in everything from food to medicine), this is the first such ring molecule ever seen in space with radio astronomy. Its unique structure enabled the scientists to tease out its distinctive radio signature, which is the “gold standard” when confirming the presence of molecules in space.

As molecules tumble in the near vacuum of interstellar space, they give off a distinctive signature, a series of telltale spikes that appear in the radio spectrum. Larger and more complex molecules have a correspondingly more-complex signature, making them harder to detect. PAHs and other aromatic molecules are even more difficult to detect because they typically form with very symmetrical structures.

To produce a clear radio fingerprint, molecules must be somewhat asymmetrical. Molecules with more uniform structures, like many PAHs, can have very weak signatures or no signature at all..

Benzonitrile’s lopsided chemical arrangement allowed McGuire and his team to identify nine distinct spikes in the radio spectrum that correspond to the molecule. They also could observe the additional effects of nitrogen atom nuclei on the radio signature.

“The evidence that the GBT allowed us to amass for this detection is incredible,” said McGuire. “As we look for yet larger and more interesting molecules, we will need the sensitivity of the GBT, which has unique capabilities as a cosmic molecule detector.”

The National Radio Astronomy Observatory is a facility of the National Science Foundation operated under a cooperative agreement by Associated Universities, Inc.

The Green Bank Observatory (GBO, https://greenbankobservatory.org) is a facility of the National Science Foundation operated under a cooperative agreement by Associated Universities, Inc.