'Atmospheric Disequilibrium' Could Help Detect Life on Other Planets

As NASA's James Webb Space Telescope and other new giant telescopes come online they will need novel strategies to look for evidence of life on other planets. A University of Washington study has found a simple approach to look for life that might be more promising than just looking for oxygen.

The paper, published Jan. 24 in Science Advances, offers a new recipe for providing evidence that a distant planet harbors life.

"This idea of looking for atmospheric oxygen as a biosignature has been around for a long time. And it's a good strategy -- it's very hard to make much oxygen without life," said corresponding author Joshua Krissansen-Totton, a UW doctoral student in Earth and space sciences. "But we don't want to put all our eggs in one basket. Even if life is common in the cosmos, we have no idea if it will be life that makes oxygen. The biochemistry of oxygen production is very complex and could be quite rare."

Future telescopes like the James Webb Space Telescope (right) will observe the atmospheres of distant planets to seek evidence of life. Earth (top left) has several gases in its atmosphere that reveal the presence of life, primarily oxygen and ozone. The new study finds that for the early Earth (bottom left), the combination of abundant methane and carbon dioxide would provide an alternative sign of life. 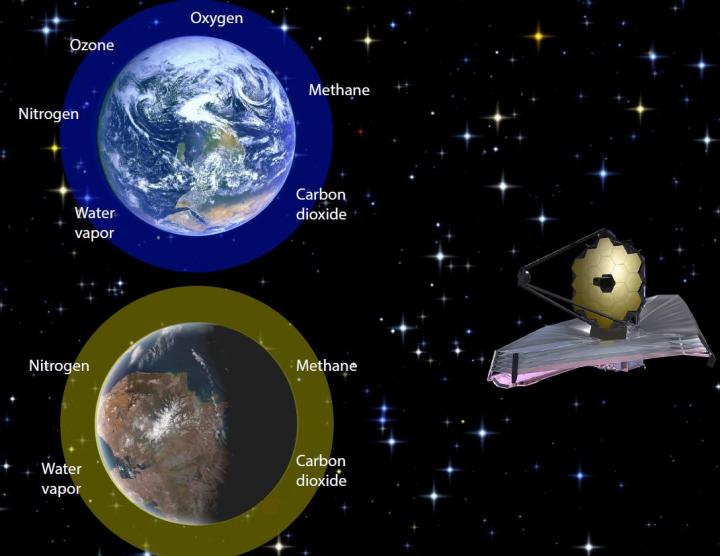 The new study looks at the history of life on Earth, the one inhabited planet we know of, to find times where the planet's atmosphere contained a mixture of gases that are out of equilibrium and could exist only in the presence of living organisms -- anything from pond scum to giant redwoods. In fact, life's ability to make large amounts of oxygen has only occurred in the past one-eighth of Earth's history.

By taking a longer view, the researchers identified a new combination of gases that would provide evidence of life: methane plus carbon dioxide, minus carbon monoxide.

"We need to look for fairly abundant methane and carbon dioxide on a world that has liquid water at its surface, and find an absence of carbon monoxide," said co-author David Catling, a UW professor of Earth and space sciences. "Our study shows that this combination would be a compelling sign of life. What's exciting is that our suggestion is doable, and may lead to the historic discovery of an extraterrestrial biosphere in the not-too-distant future."

The paper looks at all the ways that a planet could produce methane -- from asteroid impacts, outgassing from the planet's interior, reactions of rocks and water -- and finds that it would be hard to produce a lot of methane on a rocky, Earth-like planet without any living organisms.

If methane and carbon dioxide are detected together, especially without carbon monoxide, that's a chemical imbalance that signals life. The carbon atoms in the two molecules represent opposite levels of oxidation. Carbon dioxide holds as many oxygen molecules as it can, while the carbon in methane lacks oxygen and instead has oxygen's chemical adversary, hydrogen.

What's more, carbon monoxide tends not to build up in the atmosphere of a planet that harbors life.

The authors agree that oxygen is a good way to look for signs of life, but think that this new combination is at least as likely to pop up through the new telescopes' sights.

"Life that makes methane uses a simple metabolism, is ubiquitous, and has been around through much of Earth's history," Krissansen-Totton said. "It's an easy thing to do so it's potentially more common than oxygen-producing life. This is definitely something we should be looking for as new telescopes come online."

The other co-author is Stephanie Olson at the University of California, Riverside. The research was funded by NASA.