Acoustic tractor beams use the power of sound to hold particles in mid-air, and unlike magnetic levitation, they can grab most solids, liquids or even small insects and food.

In 2015 researchers at Bristol invented tractor beams that can levitate tiny objects in mid-air using sound waves. Now the same team have levitated the largest object yet at 2cm.  The new technique uses tornado-like vortexes made of sound. This technology could be used on a ‘contactless’ production line, or even to help doctors move things around inside the human body!

For the first time University of Bristol engineers have shown that it is possible to stably trap objects larger than the wavelength of sound in an acoustic tractor beam. This discovery opens the door to the manipulation of drug capsules or micro-surgical implements within the human body. Container-less transportation of delicate larger samples is now also a possibility and who knows, this could be a step towards levitating humans.

Working principle of virtual vortices: intertwined short vortices of opposite directions are emitted to trap and stabilize the particle.

Researchers previously thought that acoustic tractor beams were fundamentally limited to levitating small objects as all the previous attempts to trap particles larger than the wavelength had been unstable, with objects spinning uncontrollably. This is because rotating sound field transfers some of its spinning motion to the objects causing them to orbit faster and faster until they are ejected.

The new approach, published in Physical Review Letters today [Monday 22 January], uses rapidly fluctuating acoustic vortices, which are similar to tornadoes of sound, made of a twister-like structure with loud sound surrounding a silent core.

The Bristol researchers discovered that the rate of rotation can be finely controlled by rapidly changing the twisting direction of the vortices, this stabilises the tractor beam. They were then able to increase the size of the silent core allowing it to hold larger objects. Working with ultrasonic waves at a pitch of 40kHz, a similar pitch to that which only bats can hear, the researchers held a two-centimetre polystyrene sphere in the tractor beam. This sphere measures over two acoustic wavelengths in size and is the largest yet trapped in a tractor beam. The research suggests that, in the future much larger objects could be levitated in this way.

A styrofoam particle of 1.6cm (1.88 wavelengths of sound) trapped in the center of a 40kHz ultrasonic generator of virtual vortices.

Dr Asier Marzo, lead author on the paper from Bristol’s Department of Mechanical Engineering, said: “Acoustic researchers had been frustrated by the size limit for years, so its satisfying to find a way to overcome it. I think it opens the door to many new applications.”

Dr Mihai Caleap, Senior Research Associate, who developed the simulations, explained: “In the future, with more acoustic power it will be possible to hold even larger objects. This was only thought to be possible using lower pitches making the experiment audible and dangerous for humans.” 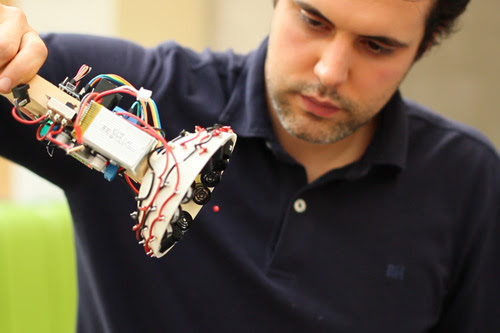 Bruce Drinkwater, Professor of Ultrasonics from the Department of Mechanical Engineering, who supervised the work, added: “Acoustic tractor beams have huge potential in many applications. I’m particularly excited by the idea of contactless production lines where delicate objects are assembled without touching them.”

Metasonics is a new company that will revolutionize our ability to manipulate soundwaves by allowing them to be directed, shaped and focused in real time. It will mean advertisers can target individuals in a crowd, noisy neighbors can mute themselves and fitness enthusiasts can monitor their health using ultrasound. The company, started by University of Bristol and University of Sussex academics, just did their first public demonstration at a global tech show in Las Vegas showcasing the crowd-favourite sound-proof window that lets in air but not sound.