The Universe Born in a Blazing 4 Trillion Degree Celsius Blast That Froze in a Billionth of a Trillionth of a Second: Mapping the Phases

The universe began as a fireball 250,000 times hotter than the core of the sun. Just microseconds after the Big Bang, the protons and neutrons that make up the building blocks of nuclei, the heart of atoms, hadn’t yet formed. Instead, we had the quark-gluon plasma, a blazing 4 trillion degree Celsius liquid of quarks, gluons, and other particles such as electrons. At that very earliest moment, it was as if the entire universe was a tremendous, churning lake of gluon “water” filled with quark “pebbles.”

In less than a heartbeat, the universe cooled, “freezing” the lake. Instead of becoming a solid block, everything separated out into clusters of quark “pebbles” connected by gluon “ice.” When some of these quarks joined together, they became our familiar protons and neutrons. After a few minutes, those protons and neutrons came together to form nuclei, which make up the cores of atoms. Quarks and gluons are two of the most basic subatomic particles in existence. Today, quarks make up protons and neutrons while gluons hold the quarks together.

Scientists are searching for the critical point of quark-gluon plasma, the substance that formed just after the Big Bang. Finding where quark-gluon plasma abruptly changes into ordinary matter can reveal new insights.

This diagram plots out what scientists theorize about quark-gluon plasma’s phases using the Relativistic Heavy Ion Collider (RHIC) and the Large Hadron Collider (LHC). Baryon density is the density of the particles in the matter. 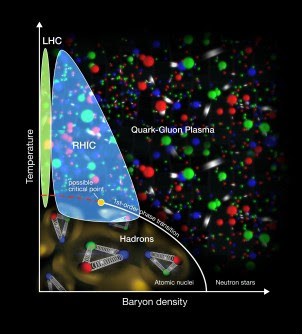 
But since the Big Bang, quarks and gluons have never appeared by themselves in ordinary matter.
They’re always found within protons or neutrons.

Except for a few very special places in the world. In facilities supported by the Department of Energy’s Office of Science, scientists are crashing gold ions into each other to recreate quark-gluon plasma. They’re working to map how and when quark-gluon plasma transforms into ordinary matter. Specifically, they’re looking for the critical point – that strange and precise place that marks a change from one type of transition to another between quark-gluon plasma and our familiar protons and neutrons.

Recreating the Beginning of the Universe

Because quark-gluon plasma could provide insight into universe’s origins, scientists have wanted to understand it for decades. It could help scientists better comprehend how today’s complex matter arises from the relatively straightforward laws of physics. 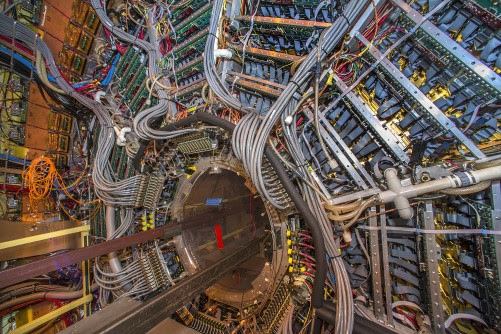 But scientists weren’t able to study quark-gluon plasma experimentally at high energies until 2000. That’s when researchers at DOE’s Brookhaven National Laboratory flipped the switch on the Relativistic Heavy Ion Collider (RHIC), an Office of Science user facility. This particle accelerator was the first to collide beams of heavy ions (heavy atoms with their electrons stripped off) head-on into each other.

It all starts with colliding ions made of protons and neutrons into each other. The bunches of ions smash together and create about a hundred thousand collisions a second. When the nuclei of the ions first collide, quarks and gluons break off and scatter. RHIC’s detectors identify and analyze these particles to help scientists understand what is happening inside the collisions.

As the collision reaches temperatures hot enough to melt protons and neutrons, the quark-gluon plasma forms and then expands. When the collisions between nuclei aren’t perfectly head-on, the plasma flows in an elliptical pattern with almost zero resistance. It actually moves 10 billion trillion times faster than the most powerful tornado. The quarks in it strongly interact, with many particles constantly bouncing off their many neighbors and passing gluons back and forth. If the universe began in a roiling quark-gluon lake, inside the RHIC is a miniscule but ferocious puddle.

Then, everything cools down. The quarks and gluons cluster into protons, neutrons, and other subatomic particles, no longer free.

After running these experiments for years, scientists at RHIC finally found what they were looking for. The data from billions of collisions gave them enough evidence to declare that they had created quark-gluon plasma. Through temperature measurements, they could definitively say the collisions created by RHIC were hot enough to melt protons and neutrons, breaking apart the quark-gluon clusters into something resembling the plasma at the very start of the universe.

Since then, scientists at the Large Hadron Collider at CERN in Geneva have also produced quark-gluon plasma. Researchers at both facilities are working to better understand this strange form of matter and its phases.

All matter has different phases. A phase is a form where matter has consistent physical properties, such as density, magnetism, and electrical conductivity. The best-known phases are solid, liquid, and gas. For example, water’s conventional phases are ice, liquid water, and steam. Beyond the phases familiar to us, there’s also the plasma phase that makes up stars and the utterly unique quark-gluon plasma.

Phase transitions, where materials move between phases, reveal a great deal about how matter functions. Materials usually change phases because they experience a change in temperature or pressure.

“Phase transitions are an amazing phenomenon in nature,” said Jamie Nagle, a professor at the University of Colorado at Boulder who conducts research at RHIC. “Something that molecularly is the same can look and behave in a dramatically different way.”

Like many types of matter, quark-gluon plasma goes through phase transitions. But because quarks and gluons haven’t existed freely in ordinary matter since the dawn of time, it acts differently than what we’re used to.

In most circumstances, matter goes through first-order phase transitions. These changes result in major shifts in density, such as from liquid water to ice. These transitions also use or release a lot of heat. Water freezing into ice releases energy; ice melting into water absorbs energy.

But quark-gluon plasma is different. In quark-gluon plasma, scientists haven’t seen the first-order phase transition. They’ve only seen what they call smooth or continuous cross-over transformations. In this state, gluons move back and forth smoothly between being free and trapped in protons and neutrons. Their properties are changing so often that it’s difficult to distinguish between the plasma and the cloud of ordinary matter. This phase can also happen in ordinary matter, but usually under extreme circumstances. For example, if you boil water at 217 times the pressure of our atmosphere, it’s nearly impossible to tell the difference between the steam and liquid.

“This is really the landmark that we’re looking for,” said Krishna Rajagopal, a theoretical physicist and professor at the Massachusetts Institute of Technology (MIT).

Understanding the relationships between these phases could provide insight into phenomena beyond quark-gluon plasma. In fact, scientists have applied what they’ve learned from studying quark-gluon plasma to better understand superconductors. Scientists can also use this knowledge to understand other places where plasma may occur in the universe, such as stars.

As John Harris, a Yale University professor, said, “How do stars, for example, evolve? Are there such stars out there that have quark-gluon cores? Could neutron-star mergers go through an evolution that includes quark-gluon plasma in their final moments before they form black holes?”

Delving deeper into these phases will require physicists to draw from both theory and experimental data.

Theoretical physics predicts the critical point exists somewhere under conditions that are at lower temperatures and higher densities than RHIC can currently reach. But scientists can’t use theory alone to predict the exact temperature and density where it would occur.

“Different calculations that do things a bit differently give different predictions,” said Barbara Jacak, the director of the Nuclear Science division at DOE’s Lawrence Berkeley National Laboratory. “So I say, ‘Aha, experiment to the rescue!’”

What theory can do is provide hints as to what to look for in experiments. Some collisions near the critical point should produce first-order transitions, while others produce smooth cross-over ones. Because each type of phase transition produces different types and numbers of particles, the collisions should, too. As a result, scientists should see large variations in the numbers and types of particles created from collision to collision near the critical point. There may also be big fluctuations in electric charge and other types of phenomena.

The only way to see these transitions is to collide particles at a wide range of energies. RHIC is the only machine in the world that can do this. While the Large Hadron Collider can produce quark-gluon plasma, it can’t collide heavy ions at low enough energy levels to find the critical point.

So far, scientists have done an initial “energy scan” where they have run RHIC at a number of different energy levels. However, RHIC’s current capabilities limit the data they’ve been able to collect.

“We had some very intriguing results, but nothing that was so statistically significant that you could declare victory,” said Rosi Reed, a Lehigh University assistant professor who conducts research at RHIC.

RHIC is undergoing upgrades to its detector that will vastly increase the number of collisions scientists can study. It will also improve how accurately they can study them. When RHIC relaunches, scientists envision these hints turning into more definitive answers.

From milliseconds after the Big Bang until now, the blazing lake of quark-gluon plasma has only existed for the smallest fraction of time. But it’s had an outsized influence on everything we see.

As Gene Van Buren, a scientist at DOE’s Brookhaven National Laboratory, said, “We’re making stuff in the laboratory that no one else has really had the chance to do in human history.”

The Office of Science is the single largest supporter of basic energy research in the physical sciences in the United States and is working to address some of the most pressing challenges of our time. For more information please visit https://science.energy.gov.