Birkbeck, University of London’s Simon Drake, Andy Beard, Hilary Downes and Jergus Baca were part of a team of geologists who discovered the meteorite impact on the Isle of Skye, including mineral forms never before reported on Earth. 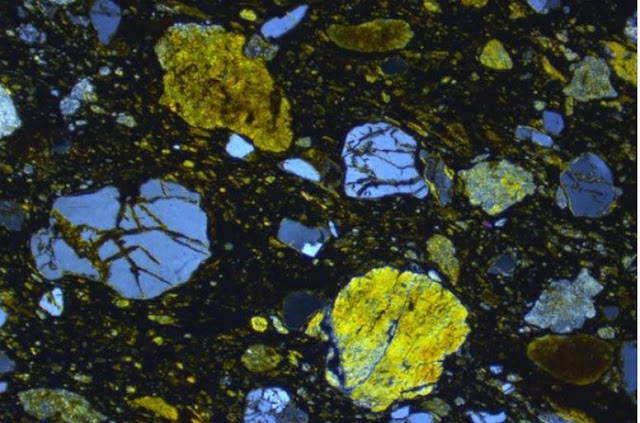 Geologists exploring the Isle of Skye got more than they bargained for when examining volcanic rocks on the Scottish site, finding mineral forms from a pre-historic meteorite impact that have never before been found on Earth.

They had been examining a thick layer at the base of a 60 million-year-old lava flow, which he and his colleagues first thought was a volcanic flow deposit called ignimbrite. After putting it under an electron microprobe, they discovered that it, in fact, contained rare minerals from outer-space.

Beard said: "When we discovered what it was we were very surprised, and it was a bit of a shock because we were not expecting that."

These mineral forms - vanadium-rich and niobium-rich osbornite – have never before been reported on Earth, only collected in space dust on a prior NASA mission. The osbornite was discovered unmelted, meaning it is likely to be an original piece of the meteorite. The discovery raises interesting questions about whether the same ejecta is yet to be discovered elsewhere in the region known as the British Paleogene Igneous Province (BPIP); where exactly the meteorite hit; and whether the impact of the meteorite could have triggered the outpouring of volcanic lava known to have begun at the same time.

A second site, seven kilometres away, proved to be a two-metre-thick layer of ejecta - material ejected from a crater - with the same strange mineralogy.

The Isle of Skye has been well explored by geologists, and the scientists were surprised that the ejecta layer had not been identified before. The first site of discovery, Drake explained, was steep, rough and very boggy, which may have deterred previous researchers from exploring the layer.

He says: “We were sinking in up to our thighs. I distinctly recall saying to Andy Beard, ‘this had better be worth it.’ It was worth it.”

Paper: nDiscovery of a meteoritic ejecta layer containing unmelted impactor fragments at the base of Paleocene lavas, Isle of Skye, Scotland
on December 17, 2017