Life on Earth Began at Least 3.5 Billion Years Ago: Oldest Fossil Every Found

Researchers at UCLA and the University of Wisconsin-Madison have confirmed that microscopic fossils discovered in a nearly 3.5 billion-year-old piece of rock in Western Australia are the oldest fossils ever found and indeed the earliest direct evidence of life on Earth.

An example of one of the microfossils discovered in a sample of rock recovered from the Apex Chert, a rock formation in western Australia that is among the oldest and best-preserved rock deposits in the world. The fossils were first described in 1993 but a 2017 study published by UCLA and UW-Madison scientists used sophisticated chemical analysis to confirm the microscopic structures found in the rock are indeed biological, rendering them -- at 3.5 billion years -- the oldest fossils yet found. 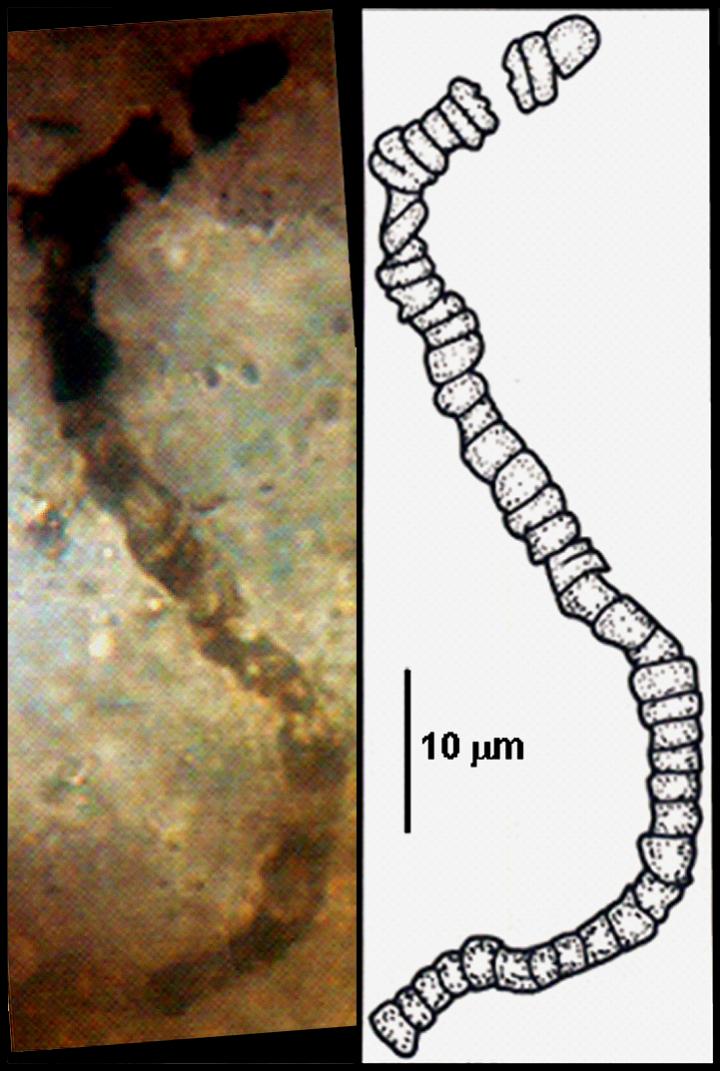 The study, published today [Dec. 18, 2017] in the Proceedings of the National Academy of Sciences, was led by J. William Schopf, professor of paleobiology at UCLA, and John W. Valley, professor of geoscience at the University of Wisconsin-Madison. The research relied on new technology and scientific expertise developed by researchers in the UW-Madison WiscSIMS Laboratory.

This sample of rock was taken from the Apex Chert, a rock formation in western Australia that is among the oldest and best-preserved rock deposits in the world, in 1982 and was soon found to contain evidence of early life on Earth. A study published by UCLA and UW-Madison scientists in 2017 used sophisticated chemical analysis to confirm the microscopic structures found in the rock are indeed biological, rendering them -- at 3.5 billion years -- the oldest fossils yet found. This is the rock after analysis in the WiscSIMS Laboratory. 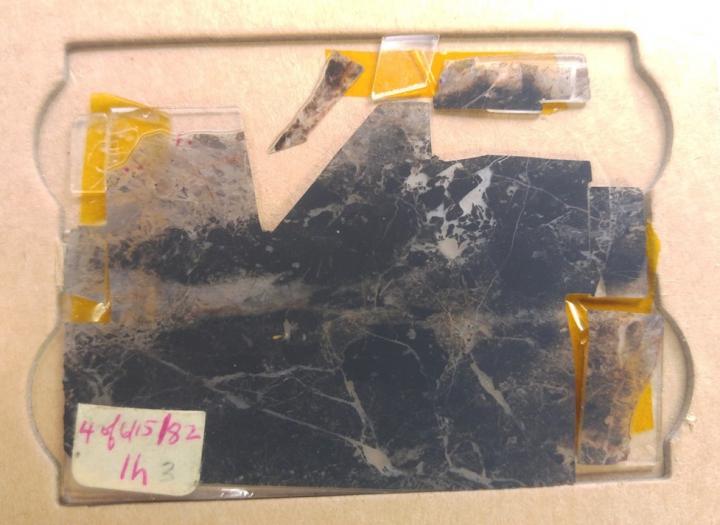 The study describes 11 microbial specimens from five separate taxa, linking their morphologies to chemical signatures that are characteristic of life. Some represent now-extinct bacteria and microbes from a domain of life called Archaea, while others are similar to microbial species still found today. The findings also suggest how each may have survived on an oxygen-free planet.

The microfossils -- so called because they are not evident to the naked eye -- were first described in the journal Science in 1993 by Schopf and his team, which identified them based largely on the fossils' unique, cylindrical and filamentous shapes. Schopf, director of UCLA's Center for the Study of Evolution and the Origin of Life, published further supporting evidence of their biological identities in 2002.

He collected the rock in which the fossils were found in 1982 from the Apex chert deposit of Western Australia, one of the few places on the planet where geological evidence of early Earth has been preserved, largely because it has not been subjected to geological processes that would have altered it, like burial and extreme heating due to plate-tectonic activity.

But Schopf's earlier interpretations have been disputed. Critics argued they are just odd minerals that only look like biological specimens. However, Valley says, the new findings put these doubts to rest; the microfossils are indeed biological.

Using a secondary ion mass spectrometer (SIMS) at UW-Madison called IMS 1280 -- one of just a handful of such instruments in the world -- Valley and his team, including department geoscientists Kouki Kitajima and Michael Spicuzza, were able to separate the carbon composing each fossil into its constituent isotopes and measure their ratios.

Isotopes are different versions of the same chemical element that vary in their masses. Different organic substances -- whether in rock, microbe or animal -- contain characteristic ratios of their stable carbon isotopes.

Using SIMS, Valley's team was able to tease apart the carbon-12 from the carbon-13 within each fossil and measure the ratio of the two compared to a known carbon isotope standard and a fossil-less section of the rock in which they were found.

"The differences in carbon isotope ratios correlate with their shapes," Valley says. "If they're not biological there is no reason for such a correlation. Their C-13-to-C-12 ratios are characteristic of biology and metabolic function."

The Apex Chert, a rock formation in western Australia that is among the oldest and best-preserved rock deposits in the world. In 1982, at the site pictured here, a team of geologists sampled rock that was ultimately found to contain microfossils of the oldest life yet described on Earth. Pictured are UW-Madison geoscience researchers on a field trip to the site in 2010. 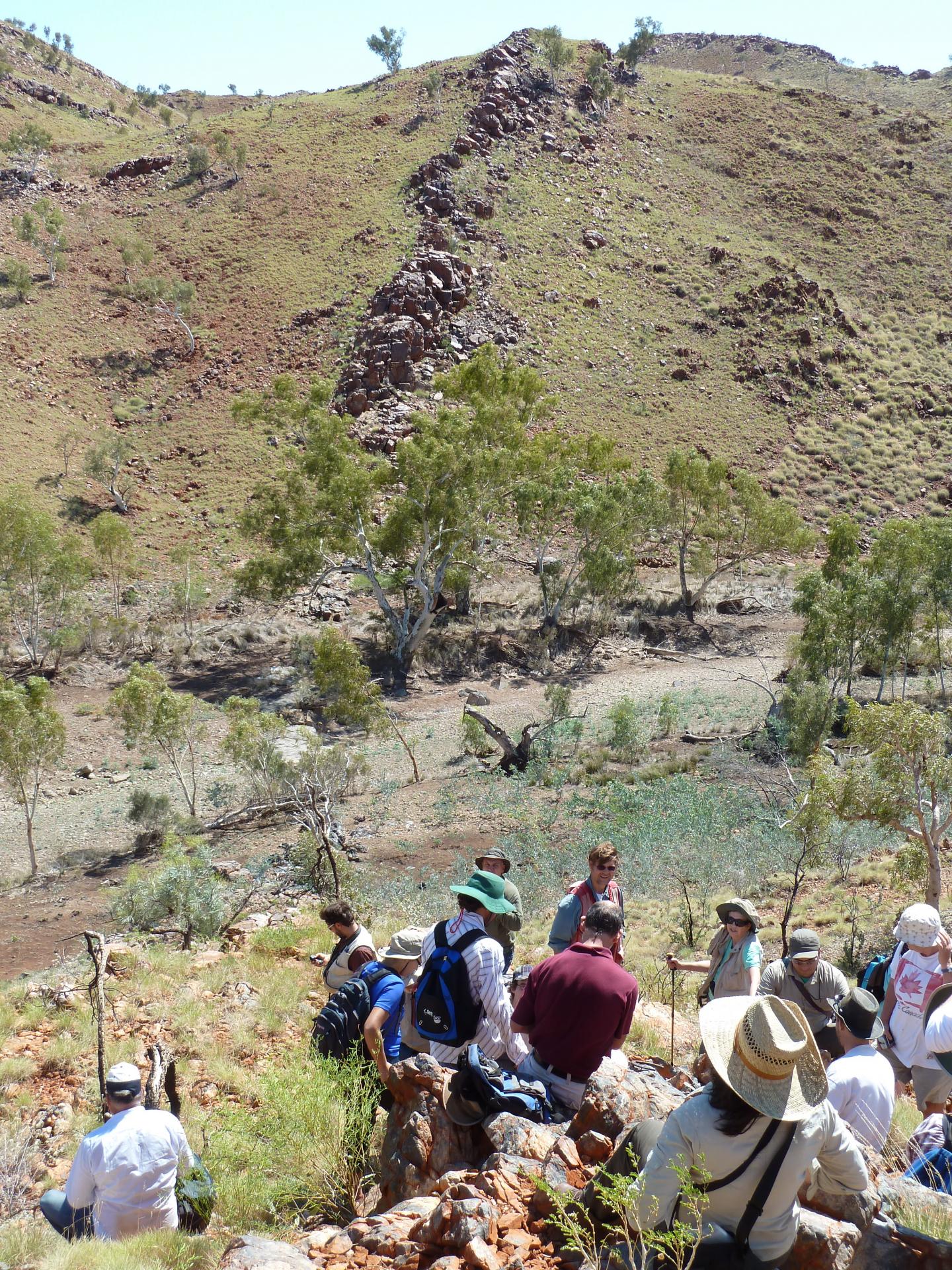 Based on this information, the researchers were also able to assign identities and likely physiological behaviors to the fossils locked inside the rock, Valley says. The results show that "these are a primitive, but diverse group of organisms," says Schopf.

The team identified a complex group of microbes: phototrophic bacteria that would have relied on the sun to produce energy, Archaea that produced methane, and gammaproteobacteria that consumed methane, a gas believed to be an important constituent of Earth's early atmosphere before oxygen was present.

It took Valley's team nearly 10 years to develop the processes to accurately analyze the microfossils -- fossils this old and rare have never been subjected to SIMS analysis before. The study builds on earlier achievements at WiscSIMS to modify the SIMS instrument, to develop protocols for sample preparation and analysis, and to calibrate necessary standards to match as closely as possible the hydrocarbon content to the samples of interest.

In preparation for SIMS analysis, the team needed to painstakingly grind the original sample down as slowly as possible to expose the delicate fossils themselves -- all suspended at different levels within the rock and encased in a hard layer of quartz -- without actually destroying them. Spicuzza describes making countless trips up and down the stairs in the department as geoscience technician Brian Hess ground and polished each microfossil in the sample, one micrometer at a time.

Each microfossil is about 10 micrometers wide; eight of them could fit along the width of a human hair.

Valley and Schopf are part of the Wisconsin Astrobiology Research Consortium, funded by the NASA Astrobiology Institute, which exists to study and understand the origins, the future and the nature of life on Earth and throughout the universe.

Studies such as this one, Schopf says, indicate life could be common throughout the universe. But importantly, here on Earth, because several different types of microbes were shown to be already present by 3.5 billion years ago, it tells us that "life had to have begun substantially earlier -- nobody knows how much earlier -- and confirms it is not difficult for primitive life to form and to evolve into more advanced microorganisms," says Schopf.

Earlier studies by Valley and his team, dating to 2001, have shown that liquid water oceans existed on Earth as early as 4.3 billion years ago, more than 800 million years before the fossils of the present study would have been alive, and just 250 million years after the Earth formed.

"We have no direct evidence that life existed 4.3 billion years ago but there is no reason why it couldn't have," says Valley. "This is something we all would like to find out."

UW-Madison has a legacy of pushing back the accepted dates of early life on Earth. In 1953, the late Stanley Tyler, a geologist at the university who passed away in 1963 at the age of 57, was the first person to discover microfossils in Precambrian rocks. This pushed the origins of life back more than a billion years, from 540 million to 1.8 billion years ago.

"People are really interested in when life on Earth first emerged," Valley says. "This study was 10 times more time-consuming and more difficult than I first imagined, but it came to fruition because of many dedicated people who have been excited about this since day one ... I think a lot more microfossil analyses will be made on samples of Earth and possibly from other planetary bodies."