École polytechnique fédérale de Lausanne (EPFL) researchers have created nanoparticles that attract viruses and, using the pressure resulting from the binding process, destroy them. This revolutionary approach could lead to the development of broad-spectrum antiviral drugs.

HIV, dengue, papillomavirus, herpes and Ebola – these are just some of the many viruses that kill millions of people every year, mostly children in developing countries. While drugs can be used against some viruses, there is currently no broad-spectrum treatment that is effective against several at the same time, in the same way that broad-spectrum antibiotics fight a range of bacteria. But researchers at EPFL's Supramolecular Nano-Materials and Interfaces Laboratory – Constellium Chair (SUNMIL) have created gold nanoparticles for just this purpose, and their findings could lead to a broad-spectrum treatment.

Once injected in the body, these nanoparticles imitate human cells and “trick” the viruses. When the viruses bind to them – in order to infect them – the nanoparticles use pressure produced locally by this link-up to “break” the viruses, rendering them innocuous. The results of this research have just been published in Nature Materials. 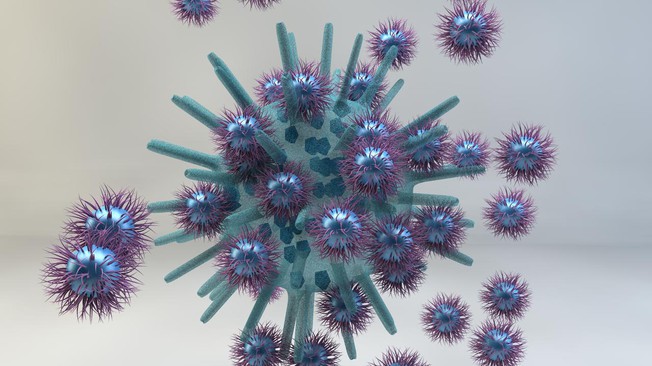 
Pressing need for a broad-spectrum treatment

“Fortunately, we have drugs that are effective against some viruses, like HIV and hepatitis C,” says Francesco Stellacci, who runs SUNMIL, from the School of Engineering. “But these drugs work only on a specific virus.” Hence the need for broad-spectrum antiviral drugs. This would enable doctors to use a single drug to combat all viruses that are still deadly because no treatment currently exists. Such non-specific therapies are especially needed in countries – particularly in developing regions – where doctors do not have the tools they need to make accurate diagnoses. And broad-spectrum antiviral drugs would help curb the antimicrobial resistance resulting from the over-prescription of antibiotics. “Doctors often prescribe antibiotics in response to viral infections, since there is no other drug available. But antibiotics are only effective against bacteria, and this blanket use fosters the development of virus mutations and a build-up of resistance in humans,” says Stellacci.

Until now, research into broad-spectrum virus treatments has only produced approaches that are toxic to humans or that work effectively in vitro – i.e., in the lab – but not in vivo. The EPFL researchers found a way around these problems by creating gold nanoparticles. They are harmless to humans, and they imitate human cell receptors – specifically the ones viruses seek for their own attachment to cells. Viruses infect human bodies by binding to replicating into cells. It is as if the nanoparticles work by tricking the viruses into thinking that they are invading a human cell. When they bind to the nanoparticles, the resulting pressure deforms the virus and opens it, rendering it harmless. Unlike other treatments, the use of pressure is non-toxic. “Viruses replicate within cells, and it is very difficult to find a chemical substance that attacks viruses without harming the host cells,” says Stellacci. “But until now, that’s been the only known approach attempted permanently damage viruses.” The method developed at SUNMIL is unique in that it achieves permanent damage to the viral integrity without damaging living cells.

Successful in vitro experiments have been conducted on cell cultures infected by herpes simplex virus, papillomavirus (which can lead to uterine cancer), respiratory syncytial virus (RSV, which can cause pneumonia), dengue virus and HIV (lentivirus). In other tests, mice infected by RSV were cured. For this project, the SUNMIL researchers teamed up with several other universities that contributed their expertise in nanomaterials and virology.

“Broad-spectrum non-toxic antiviral nanoparticles with a virucidal inhibition mechanism”, published in Nature Materials. This research was funded in part by the Fondation Leenaards and NCCR Bio-Inspired Materials