It seems human's affinity for adornments were a motivating desire in the prehistoric development of metal alloys.

While studies of ancient gold metallurgy and the color characteristics of gold alloys are well supported by modern research, the color properties of prehistoric copper alloys, such as tin bronzes or arsenical copper, the most abundant type of metal artefacts in prehistory, have largely been understudied. Until now.

In a study published today in the Journal of Archaeological Science an international team of Serbian and UK researchers have developed a Cu-As-Sn (Copper-Arsenic-Tin) colour ternary diagram to uncover the original colours of archaeological artefacts now patinated through age and exposure.

Gold from the richest grave in the cemetery at the 5th millennium site of Varna, Bulgaria. This grave contains c.3kg of gold items decorating the body of the deceased. Varna is considered one of the key archaeological sites in world prehistory. 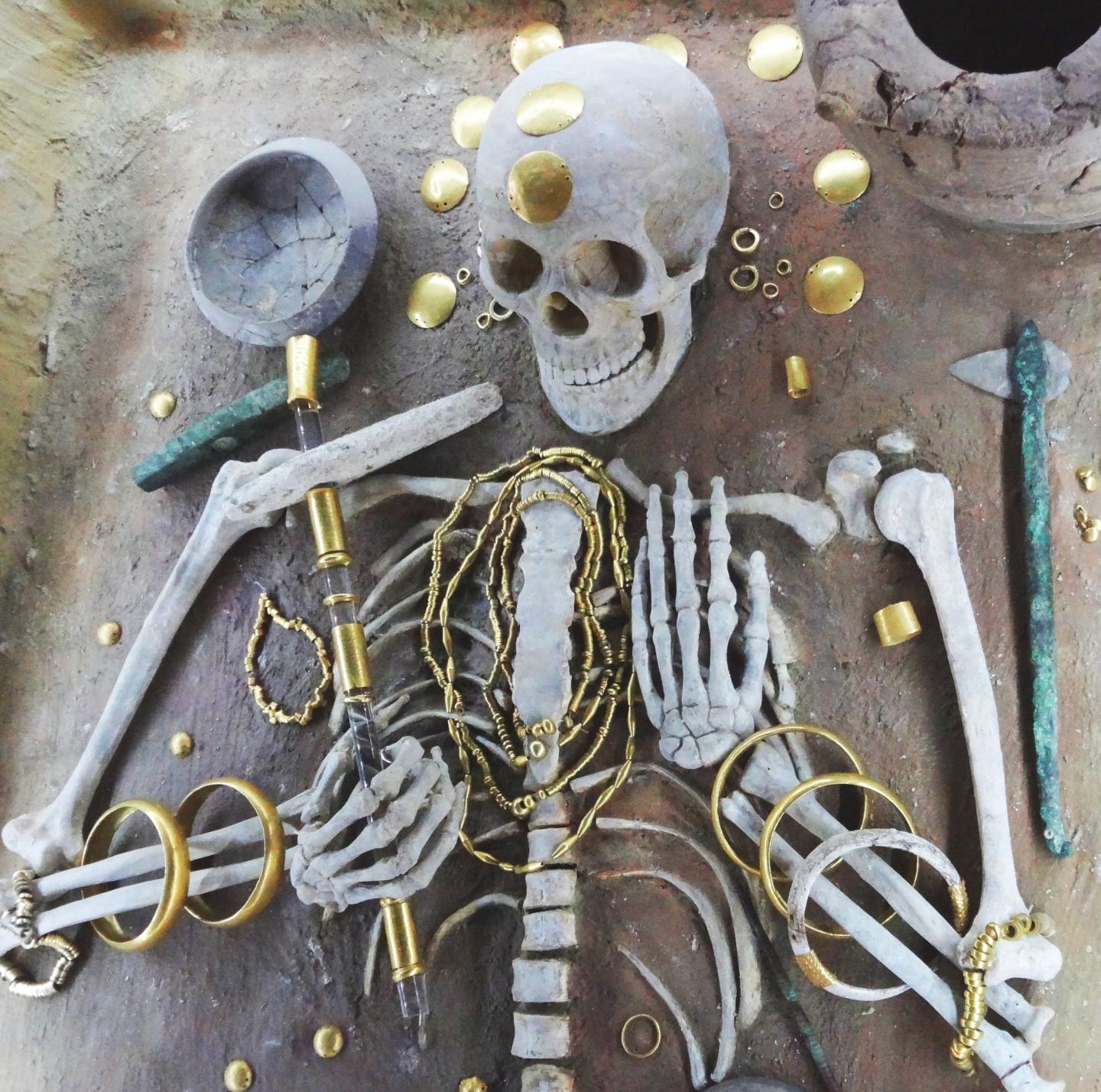 The study was prompted by the discovery of the world's earliest tin bronze artefacts four years ago in Serbia and the ongoing debate into what significance colour played in the advancement of metal-making technologies.

Dr Miljana Radivojevic, lead author and researcher at the McDonald Institute for Archaeological Research, University of Cambridge, said "Given the acknowledged importance of aesthetics in ancient metallurgy, we decided to experimentally replicate the most common prehistoric alloys, made of binary and ternary combinations of copper, arsenic and tin and produce a colour chart that comes the closest to showing the true 'bling' of such artefacts in the past. We were inspired by modern jewellery making where similar colour charts are used to explore properties of gold-copper-silver alloys."

Professor Zeljko Kamberovic, leader of the Serbian team from the University of Belgrade Faculty of Technology and Metallurgy said, "Our laboratory is one of the few in Europe to hold a license to experiment with arsenic, which is why we were approached to develop the study and produce 64 metal samples of variable copper-tin-arsenic compositions."

64 metal samples of using variable copper-tin-arsenic compositions created to use in the study. 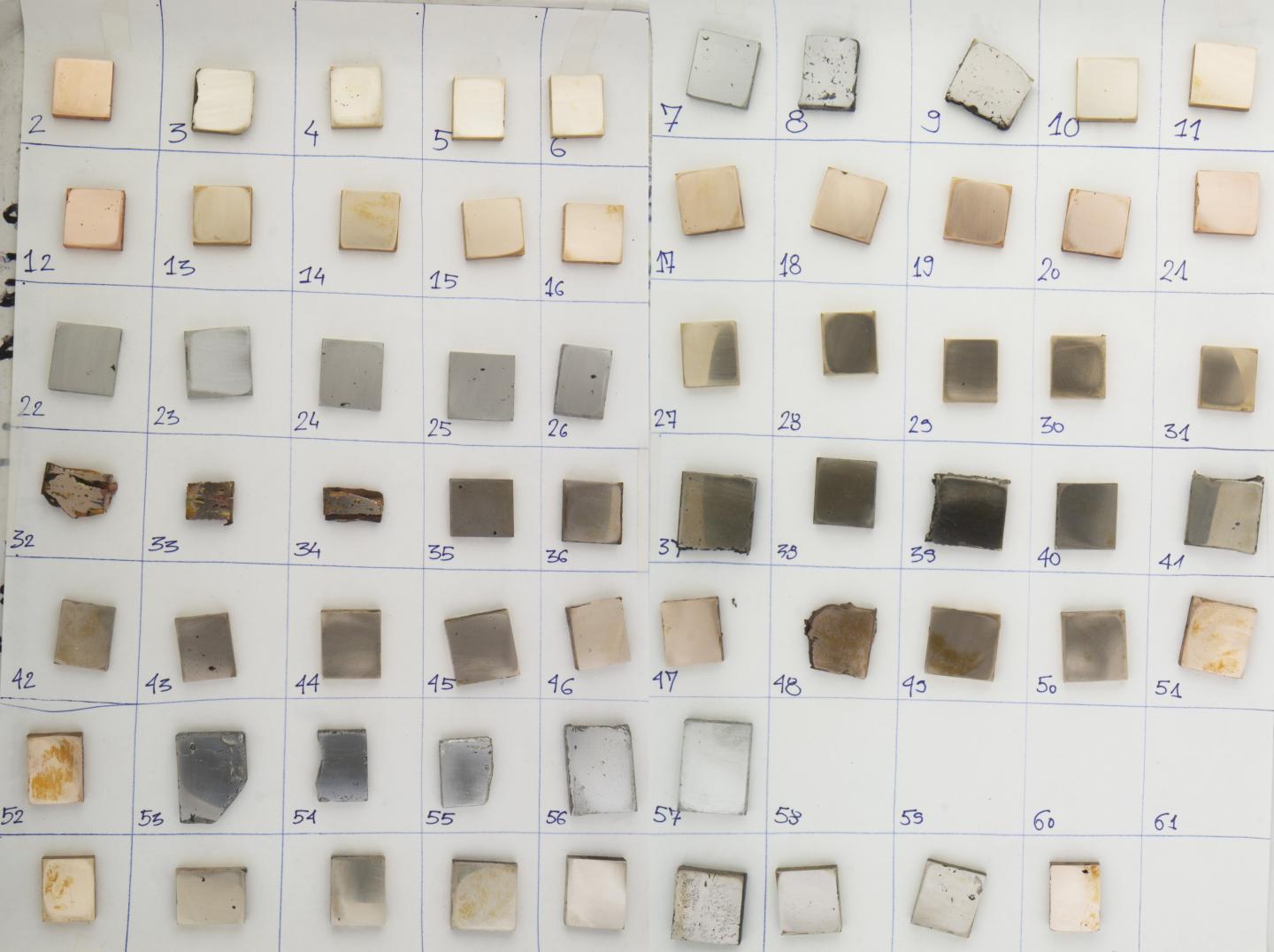 "The copper-tin-arsenic ternary colour charts enabled us to re-evaluate the claim that early tin bronzes in the Balkans had a distinctive golden hue", said Radivojevic. She added that it is "now highly likely that the production of this new alloy in the Balkans at the same time as gold could have been dictated by the demand for the 'exotic' golden hue, or its closest imitation".

"This research, although driven by the case study in the Balkans, yielded a valuable representation of colour of the most commonly produced prehistoric alloys worldwide. We now have the means to bring the original shine to the items that have lost their original aesthetic appeal during several millennia of deposition below ground", stated Professor Martinón-Torres from the UCL Institute of Archaeology, where chemical and colorimetric analyses for this study were conducted.

Dr Radivojevic added that she anticipates these colour charts being widely used in teaching or museum exhibits, "helping students and museum visitors to imagine how the majority of ancient metal objects looked a couple of thousands years ago."