Famine may be largely a thing of the past but in recent years the re-emergence of a disease that can kill wheat - which provides a fifth of humanity's food - has threatened food security; now a breakthrough is being announced just before Christmas, in two companion papers being published in the journal Science.

In a world first, science has leaped a step ahead of an old foe that has recently re-emerged in some parts of the world, where it has devastated crops because of its ability to evolve, undoing much of the hard work that began in earnest with the Green Revolution - using natural techniques to isolate the first rust pathogen gene that wheat plants detect and use to 'switch on' in-built resistance.

The breakthrough in research targeting the stem rust foe - historically the most dangerous pathogen of wheat - will mean suspect samples could be analysed within hours in an emergency rather than weeks, potentially saving crops from being destroyed.

This is stem rust on wheat plant.

"For the first time it will be possible to do DNA testing to identify whether a rust in a wheat crop anywhere in the world can overcome a rust-resistance gene, called Sr50, which is being introduced in high-yielding wheat varieties," said Professor Robert Park, corresponding author from the University of Sydney.

"This will indicate whether or not a given wheat crop needs to be sprayed with expensive fungicide quickly to protect against rust - which would otherwise devastate the crop in a matter of weeks."

Rust disease epidemics have emerged at times in tandem with carefully refined selective breeding in cereals; the disease is once again extremely damaging in East Africa and is making a comeback in Europe.


For the first time ever, scientists are gaining ground in the race against wheat stem rust, a pathogen that threatens global food security because of its ability to kill wheat. A team of researchers from the University of Sydney, Commonwealth Scientific and Industrial Research Organisation (CSIRO), Rothamsted Research, the University of Minnesota and USDA have discovered the first rust virulence molecule that wheat plants detect to 'switch on' built-in resistance and stave off the disease.

Stem rust, historically the most dangerous pathogen of wheat is caused by the fungus Puccinia graminis f. sp. tritici (Pgt). A particularly destructive form of Pgt, Ug99, has recently received much attention because of its spread across Africa and the Middle East. Such geographic expansion and the emergence of other virulent strains related and non-related to Ug99 have caused great concerns for wheat production. Even more alarming is the recent detection of new virulent strains in Europe which could easily make their way to the US. Findings by this group of scientists published in Science reveal how the immune system in plants resistant to this disease directly recognizes a specific fungal protein to subsequently "turn on" resistance and fend off the pathogen.


"For the first time, it will be possible to do DNA testing to identify whether a rust in a wheat crop anywhere in the world can overcome a rust-resistance gene, called Sr50, which is being introduced in high-yielding wheat varieties," said University of Sydney Professor of Sustainable Agriculture Robert Park, co-leader of the research team. "This will indicate whether or not a given wheat crop needs to be sprayed with expensive fungicide quickly to protect against rust, which would otherwise devastate the crop in a matter of weeks."

This is a key finding to stay ahead of rust disease epidemics, like those that have been extremely damaging in East Africa and making a comeback in Europe.

"It's like an ongoing arms race - we've got to keep one step ahead of this changing pathogen," said Park.

Co-corresponding author, University of Minnesota Plant Pathology Adjunct Professor Peter Dodds from CSIRO, said demand for wheat in the developing world was expected to jump 60 percent by 2050 and in economic terms alone the ramifications were huge. 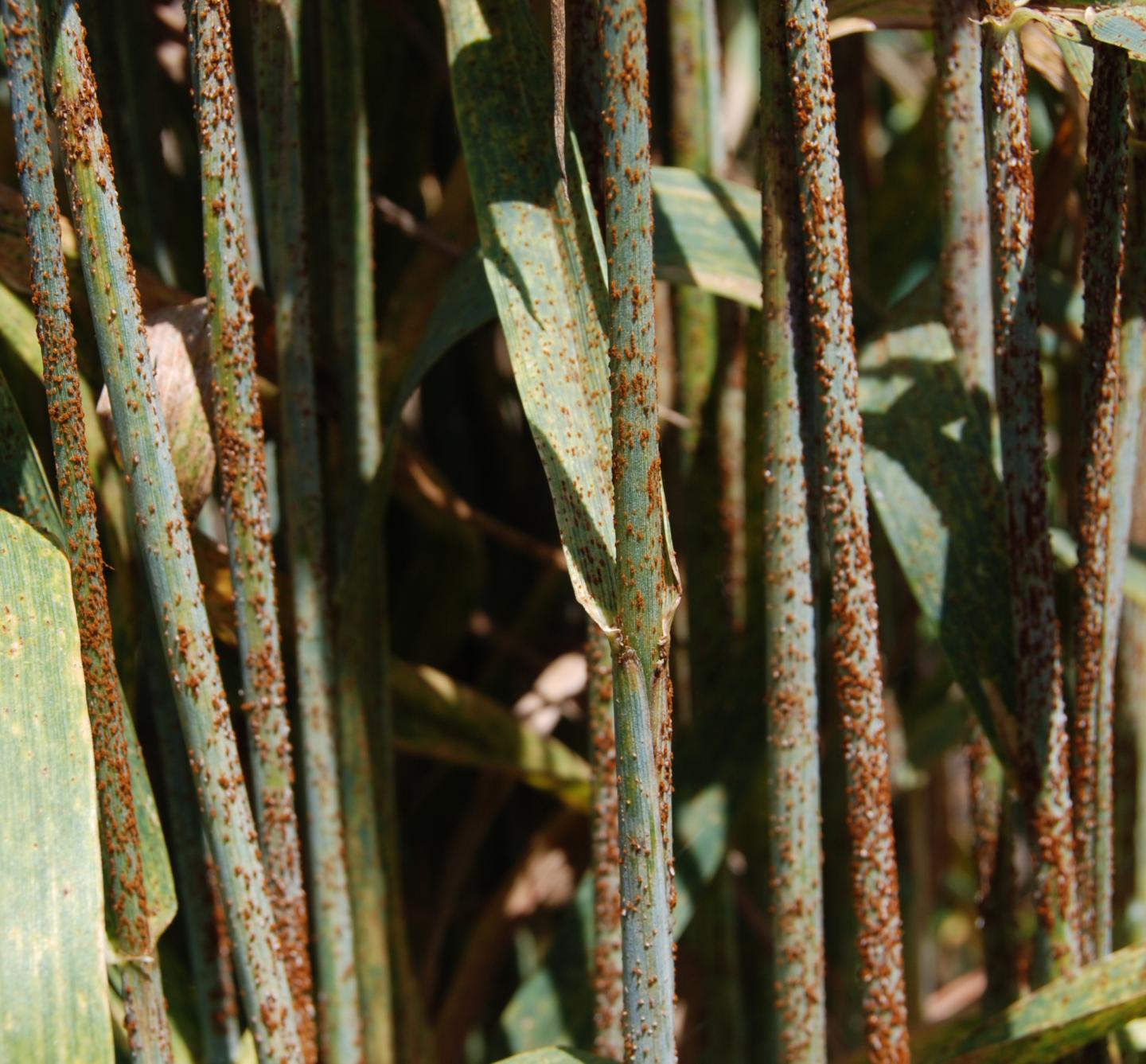 
Owning to a long-history of stem rust research expertise, University of Minnesota College of Food, Agricultural and Natural Resource Sciences (CFANS) Professor Brian Steffenson and Adjunct Professor Yue Jin have been collecting Pgt isolates from around the world, including those causing epidemics in Africa. Plant Pathology Professor Melania Figueroa and graduate student Feng Li leveraged these resources to examine the genetic variability of AvrSr50 in a set of Pgt isolates with global importance.

"Close examination of the sequence of this gene in strains from diverse origin can provide important clues to understand the evolution of this pathogen and how virulence emerges," said Figueroa.

A key contribution to the study was the analysis of an Sr50-virulent strain collected by United States Department of Agriculture scientist Yue Jin from barberry, the alternate host of Pgt where the pathogen undergoes sexual reproduction. This strain contains a variation of a gene that is not recognized by Sr50, which helped to confirm the identity of the gene and showed how stem rust can evolve to overcome resistance.

Rust: the fungi that attacks plants from CSIRO on Vimeo.

Using a Biosafety Level - 3 containment facility, the University of Minnesota team was also able to work with the African strain Ug99 under maximum restricted conditions to prevent pathogen escapes.

"It is essential we determine the propensity of Pgt strains to evolve virulence to specific resistance genes, in this case we know that Ug99 may be primed to defeat Sr50 in the field," said Figueroa.

"Our results so far show that the plant immune system is able to directly recognize the fungal protein, but we want to understand the whole process better - what's going on at the protein level, at the gene level, and how the fungus can escape recognition," said Dodds.

The scientific contribution to this study made by the University of Minnesota scientists highlights the commitment of our institution to work in teams to solve important challenges in agriculture. For fourth year Ph.D. student Feng Li, who is extremely passionate about food security, this has been a highly valuable training experience. "I hope to apply this knowledge to address similar problems in food security. Wheat production is affected by two other rust pathogens, the research plan we followed in this project can guide other scientists to uncover additional virulence molecules in their systems " says Li.