What Grosses Out a Chimpanzee? Origins of Disgust Investigated

Chimpanzees do some pretty disgusting things.

In their natural habitats, chimpanzees are known to pick up seeds from feces and re-ingest them. In captivity, some practice coprophagy: the deliberate ingestion of feces. These behaviors usually involve their own fecal matter, or that of their closest family members. If presented with feces and other bodily fluids from others, however, that's an entirely different story.

In 2015, researchers from Kyoto University's Primate Research Institute went to the Primate Center at the 'Centre International de Recherches Médicales de Franceville' (CIRMF) in Gabon to test whether chimpanzees are grossed out by some of the same things as humans, particularly those that are sources of infectious disease.

Avoiding biological contaminants is a well-known manifestation of the adaptive system of disgust. In theory, animals evolved with this system to protect themselves from pathogens and parasites, which are often associated with media or substrates that invoke our sense of disgust. For example, bodily products are universal disgust elicitors in humans, but until now we did not know whether they also elicit similar reactions in our primate cousins.

A series of novel experiments show that chimpanzees delay eating food items placed atop replica feces compared to the more benign brown foam; generally stay further away from the smell of potential biological contaminants; and recoil from food items associated with soft and moist substrates.

"If chimpanzees and other primates can discern contamination risk via different cues, individuals with higher sensitivities to feces and other bodily fluids may be less infected, which could have important health benefits," explains Cecile Sarabian, the lead author of the study.


Chimpanzee feeding on an orange. 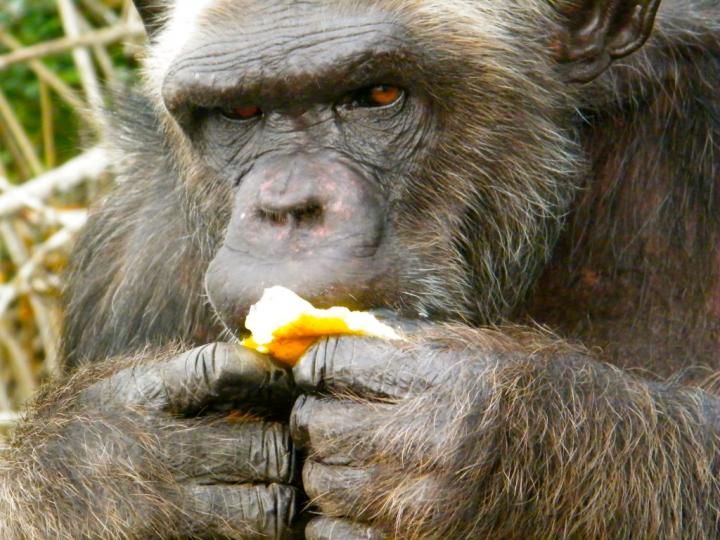 "Moreover, such results may have implications for animal welfare and management. We can better inform staff and keepers about the adaptive value of such sensitivity and its flexibility, as well as identify which individuals may be more at risk of infection and therefore require more attention."

While visual and olfactory cues of biological contaminants made the chimps hesitate before chowing down, it did not stop them from feeding entirely. However, tactile information seemed to elicit the strongest aversive reaction.

When the researchers presented chimpanzees with an opaque box where they could reach in for food placed atop a soft and moist piece of dough, the chimps recoiled immediately after making contact. They did not, however, react the same way if the food was placed atop a piece of rope.

Chimpanzees, therefore, spontaneously react just like humans when blindly touching soft and moist substrates, which incidentally are expected to be rich in biological contaminants compared to hard and dry substances.

"While anyone watching the reactions of these chimpanzees in the tactile experiments can empathize with them, it's premature to say that they feel the same as we might in that situation" cautions Andrew MacIntosh, senior author on the study. "What's great about these experiments, though, is that the observed responses are functionally similar to what ours would be, providing evidence that the mechanism underlying their behavior could be similar to ours."

"These experiments hint at the origins of disgust in humans, and help us better understand the protective function of this emotion" concludes Cecile Sarabian. "We are currently in the process of expanding our 'disgusting' work to include other primate and non-primate species"