What Adornments Told about the Culture of a Prehistoric People

Vladislav Zhitenev, a Russian archaeologist from  Lomonosov Moscow State University (MSU), studied bone jewelry found at Sungir Upper Paleolithic site. A group led by Vladislav Zhitenev found out that many items were crafted specifically for burial purposes, while others were worn on a daily basis. The style of the jewelry was influenced by many cultures of Europe and the Russian Plain. The article was published in EPAUL 147.

Sungir Upper Paleolithic site is located in Vladimir Region and is dated back to 29,000-31,000 years. Scientist began to study his place over thirty years ago. The encampment of prehistoric hunters includes a burial site of a 40-50 year old man and a grave of two children who died 10-14 years of age. Archaeological excavation revealed over 80 thousand different objects.

"This children's grave contains more adornments and other burial items than any other Upper Paleolithic burial site in Eurasia," - says Vladislav Zhitenev, the author of the study, doctor of historical sciences, and assistant professor of the Archaeology Department of the Faculty of History, MSU. Currently all findings are kept in the State Vladimir-Suzdal Museum Reserve.

This is bone jewelry found at Sungir in the burial of children (1-3) and in the cultural layer (4). 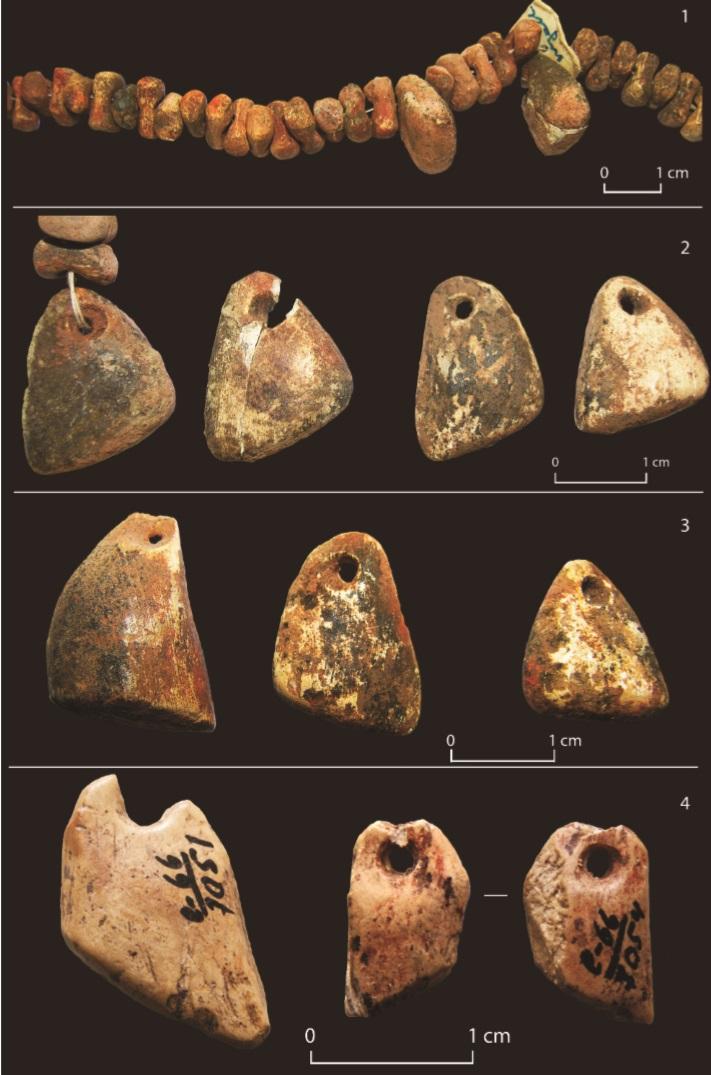 Having studied pendants made from the teeth of Arctic fox, bone beads, and other personal ornaments, scientists found out that these items were worn for a long time as they exhibited rubbing marks and other signs of tear. Other ornaments found at the burials were made in a hurry and don't look so smooth and convenient. Evidently, they were crafted specifically for the burial ceremony. These items include a large horse figurine with a disproportionately short back led. Although the surface of the figurine had been polished, it has a lot of manufacturing and processing marks.

It is still unknown why the grave of children appeared to contain so many objects including worn ones. According to one version, people used the child burial to make a sacrifice to save the community from an adversity of some kind, such as illness or hunger. Burial items were made not only by experienced craftsmen, but by children as well. One of the tusk disks found in the children's grave was made carelessly and unskillfully. It is likely it was crafted by a kid.

Adornments are elements of a non-verbal language used by prehistoric people to tell friends from enemies and to learn about one's social status and standing. By studying personal ornaments scientists learn more about different aspects of intercultural communication in the Upper Paleolithic period.

Vladislav Zhitenev found out that the man and the children lived relatively at the same time separated by several generations at most. This is confirmed by the identical style of peronal ornaments found in their graves. The children were buried at the same time, but the time period between their death and the passing of the man is still unknown. Radiocarbon dating method failed to provide an answer as it is not accurate to the year when applied to such prehistoric specimens. But when radiocarbon dating gives only approximate results, archaeologists turn to implicit data.

"When looking at an item, one can always see a master's hand. Many adornments from the burial sites of the man and the children were crafted in the same way, as if by the same person. Alternatively, this technique could have been passed within the family, say, from father to son or from grandmother to granddaughter," - explains Vladislav Zhitenev. Therefore, the man and the children were separated in time by no more than several dozen years.

Sungir adornments are difficult to classify and include into a certain cultural tradition, as they had been influenced by many cultures. On the one hand, they have a lot in common with the Aurignacian culture that was widely spread in Western and Central Europe in the Early Upper Paleolithic Stone Age. On the other hand, Sungir findings resemble those from some early sites in Kostenki. Finally, all these items are combined with stone objects crafted using a Neanderthal technology, although the remains found in Sungir belonged to Homo sapiens.

Having studied Sungir adornments, scientists found out that a part of them was crafted specifically for the burial ceremony, and another one was worn on a daily basis; the man and the children lived roughly at the same time; and the crafting style was influenced by many cultures including the Aurignacian culture and the culture of the Russian Plain.

In his further studies Vladislav Zhitenev plans to focus on intercultural communication, for example, to find difference between the sites with and without a Neanderthal component.