Hot vents in the deep sea and geysers on land document the penetration of water into the hot interior of the Earth. This happens primarily in regions where the crust breaks up and magma chambers are close to the surface, e.g. in the area of mid-ocean ridges. But how deep does the water penetrate and cool the upper part of the hot mantle? So far it has been assumed that this process only reaches depths of a few kilometres. A new analytical method, developed at GEOMAR Helmholtz Centre for Ocean Research Kiel, now shows that water penetrates much deeper into the Earth than previously thought.

The hydrothermal circulation changes the ocean crust and increases the Chlorine (CL) concentration of the rocks by incorporation of sea water. The magma takes up parts of this crust leading to an increase of chlorine of the magma. If the magma erupts at the sea floor, basalt lava is formed that we sampled and investigated in detail. 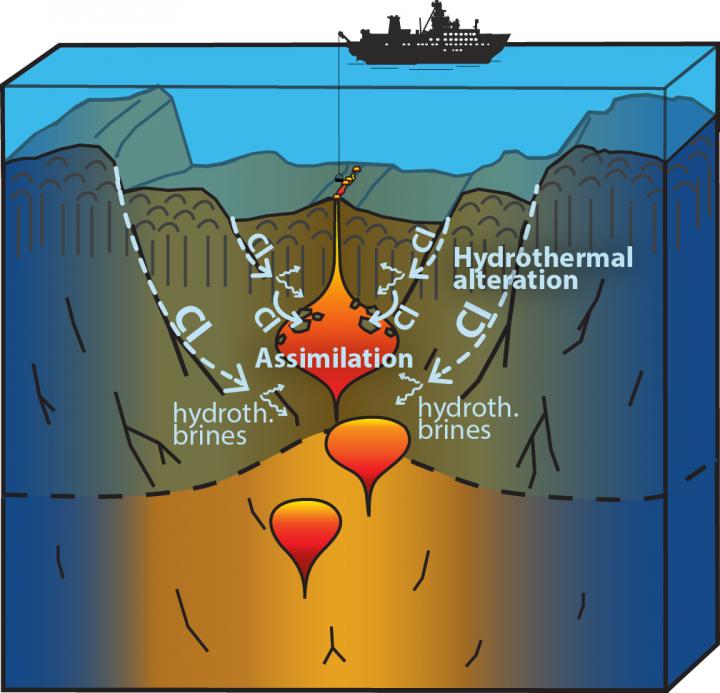 "Chlorine is the key element in our investigations", explains Dr. Froukje van der Zwan, first author of the GEOMAR study. "We were able to detect this indicator for seawater in basalt rock even in very low concentrations", van der Zwan continues. In her PhD thesis, she developed a new method to study chlorine levels in rock samples collected at the Southern Mid-Atlantic Ridge and Gakkel Ridge in Central Arctic. In addition, a chemical analysis of selected crystals in the rocks samples also allowed the depth at which the chlorine was incorporated into the rock to be determined.

"For our analyses, we had to push the electron-beam microprobe to its limits. It is a special scanning electron microscope, to which spectrometers are attached for the quantitative analysis of major, minor and trace element concentration", van der Zwan explains. The microprobe, as well as other necessary devices, were available at GEOMAR. Furthermore, with the results of this study, the authors were able to verify theoretical models that were developed at GEOMAR.

"So far, it has been assumed that high pressure and temperatures prevented water from penetrating below 10 kilometres", says Prof. Dr. Colin Devey, co-author of the GEOMAR study. "We can now show that the water penetrates much deeper", Devey continues. This finding is important for the cooling of the oceanic crust and its heat budget, as well as for the total level of volatiles in the oceanic crust, which are later subducted and recycled into the mantle.