A unique collection of Iron Age metal artifacts which sheds new light on feasting rituals among prehistoric communities has been discovered by archaeologists from the University of Leicester during an excavation at Glenfield Park, Leicestershire.

The team, from the University of Leicester Archaeological Services (ULAS), has located a trove of ancient treasures at the site, including eleven complete, or near complete, Iron Age cauldrons, fine ring-headed dress pins, an involuted brooch and a cast copper alloy object known as a 'horn-cap', which may have been part of a ceremonial staff, emphasizing the unusual nature of the metalwork assemblage.

This is a copper alloy horn-cap ULAS. 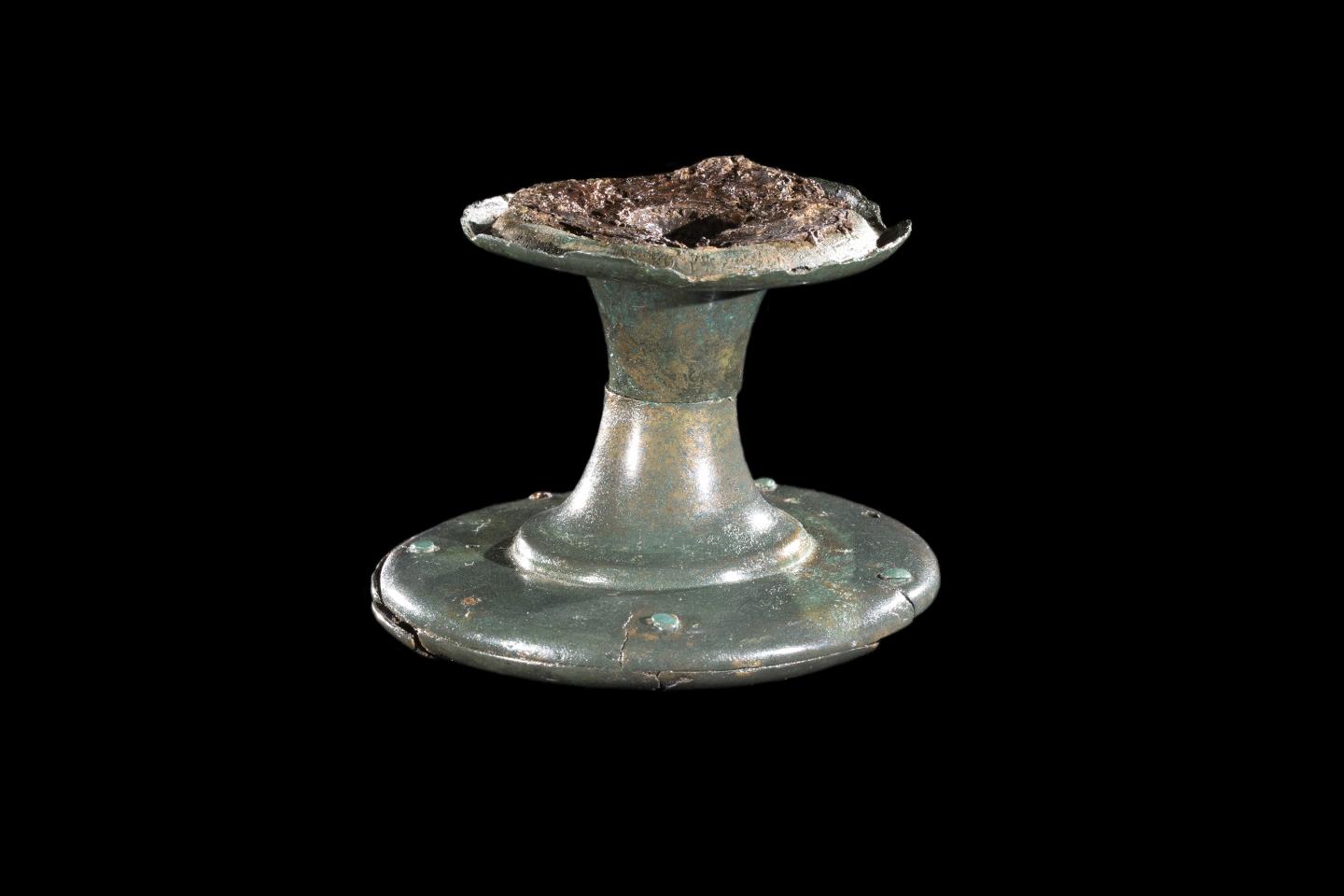 The collection is unprecedented in terms of the overall mix of findings, with the cauldrons highlighting the role of the settlement as a potential host site for feasting, with associated traditions of ritual deposition of important objects.

An iron spearhead just after it was discovered_ 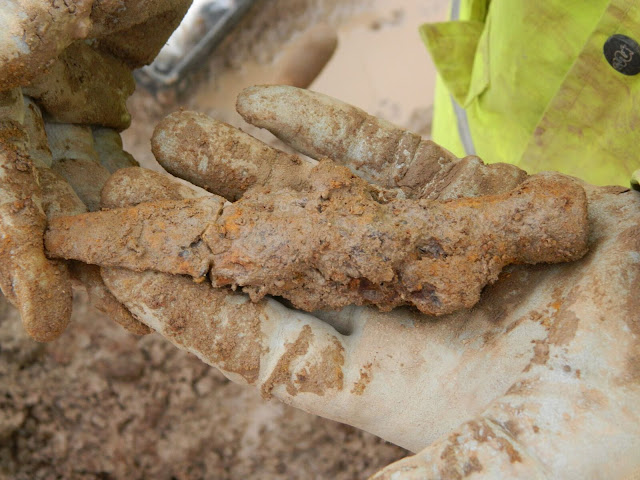 The project took place over the winter of 2013/14 and was commissioned in advance of Glenfield Park, a large-scale warehouse and distribution development by Wilson Bowden Developments Ltd. close to the M1, and between the villages of Glenfield and Kirby Muxloe, both situated on the urban fringes of Leicester.


The excavation has revealed evidence for long-term landscape inhabitation throughout most of the Iron Age and Roman periods, across an area of c. 12ha, with the main focus being a dense c. 4ha spread of settlement remains comprising many roundhouses, enclosures, 4-post structures and pits that occupied the southern slopes of a low spur of slightly higher ground at the northern end of the development area.

The cauldrons and other finds at Glenfield Park are the result of a series of events that took place over a considerable length of time and have resulted in multiple episodes of deposition across the settlement. 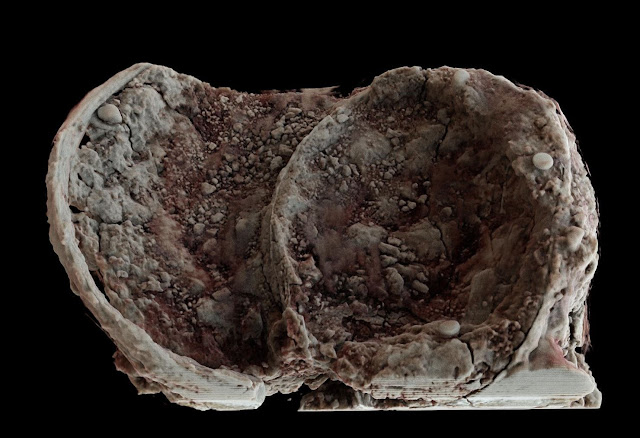 These repeated acts mark the site out as a potential ritual and ceremonial centre that also hosted large feasts.

John Thomas, director of the excavation and Project Officer from the University of Leicester Archaeological Services, said: "Glenfield Park is an exceptional archaeological site, with a fantastic array of finds that highlight this as one of the more important discoveries of recent years. Early occupation of the site during the earlier middle Iron Age (5th - 4th centuries BC) was relatively modest, consisting of a small open settlement that occupied the south-facing, lower slopes of the spur.

Slightly later in the middle Iron Age, indicated to be in the 4th or 3rd centuries BC by radiocarbon dating, the settlement underwent striking changes in character. Individual roundhouses were now enclosed, there was far more evidence for material culture, and rituals associated with the settlement involved apparently deliberate burial of a striking assemblage of metalwork.

"It is the metalwork assemblage that really sets this settlement apart. The quantity and quality of the finds far outshines most of the other contemporary assemblages from the area, and its composition is almost unparalleled. The cauldron assemblage in particular makes this a nationally important discovery.

This is an iron involuted brooch ULAS. 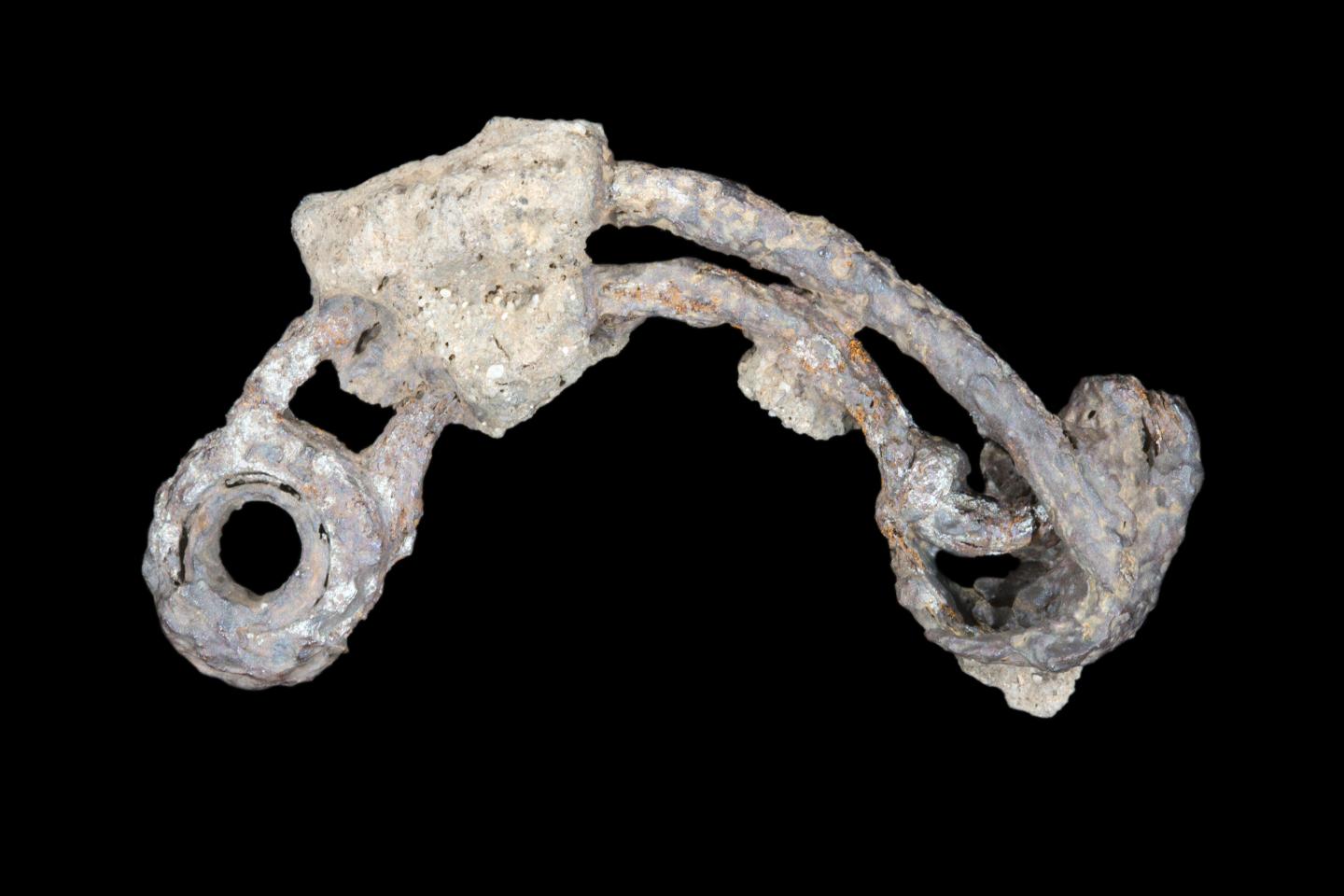 
"They represent the most northerly discovery of such objects on mainland Britain and the only find of this type of cauldron in the East Midlands."

Most of the cauldrons appear to have been deliberately laid in a large circular enclosure ditch that surrounded a building. They had been placed in either upright or inverted positions, before the ditch was filled in, suggesting that they were buried to mark the cessation of activities associated with this part of the site. Other cauldrons were found buried across the site, suggesting that significant events were being marked over a long period of time as the settlement developed.

They appear to have been a variety of sizes, with rims ranging between 360mm and 560mm in diameter, with the total capacity of all cauldrons being approximately 550 litres, which illustrates their potential to provide for large groups of people that may have gathered at the settlement from the wider Iron Age community of the area.

John said: "Due to their large capacity it is thought that Iron Age cauldrons were reserved for special occasions and would have been important social objects, forming the centrepiece of major feasts, perhaps in association with large gatherings and events.

"The importance of cauldrons as symbolic objects is reflected in their frequent appearance in early medieval Irish and Welsh literature, which has been drawn upon in studies of Iron Age society. They are rarely found in large numbers and, with the exception of a discovery in Chiseldon, where 17 cauldrons were found in a pit, there have been few excavated examples in recent years."

The cauldrons are extremely fragile and were lifted from site in soil blocks for later analysis.

They were initially investigated at Paul Strickland Scanner Centre in Middlesex, a leading medical imaging centre specialising in cancer which had CT-scanning equipment large enough to accommodate the soil blocks.

Dr Andrew Gogbashian, Consultant Radiologist at Paul Strickland Scanner Centre, said: "We have the latest CT scanning technology and using our medical imaging skills and experience to contribute to such a significant archaeological discovery is a real privilege."

The scans provided useful information in terms of the cauldron orientation, approximate dimensions and profiles, as well as tantalising glimpses of manufacturing methods. Most excitingly the scans also revealed exceptionally rare evidence for decoration from the period, further highlighting the significance of the site.

This is a copper alloy ring-headed dress pin ULAS. 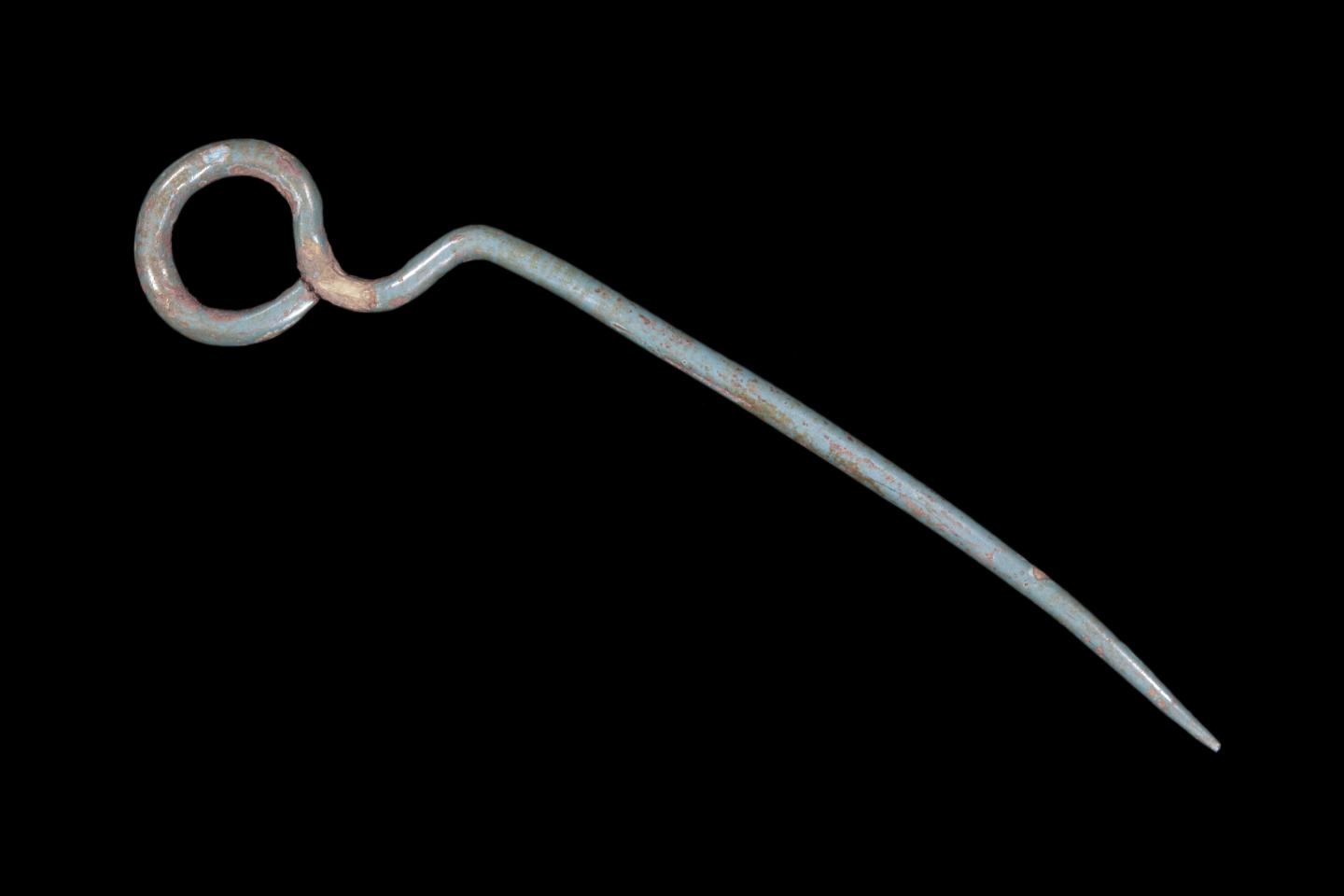 Credit: University of Leicester
One example is on a complete cauldron, which has raised stem and leaf motifs on the vessels iron band, close to the handle locations, which are similar to the so-called 'Vegetal Style' of Celtic art, generally dated to the 4th century BC. Another example of decoration has been identified on a small copper alloy bowl fragment, which has a domed rivet or raised boss decoration, suggesting that some of the bowls carried decoration too.

Further detail from the cauldrons will only be possible from excavation and conservation, which is being undertaken by MOLA (Museum of London Archaeology).

Liz Barham, Senior Conservator at MOLA said: "Already we have been able to uncover glimpses of the detailed histories of these cauldrons through CT scanning, including evidence of their manufacture and repair, and have identified sooty residues still clinging to the base of one of the cauldrons from the last time it was suspended over a fire. During the upcoming conservation we hope to discover much more about the entire assemblage. If we're lucky, we may even find food residues from the last time they were used - over 2000 years ago."

John added: "The settlement itself adds considerable information on the establishment, growth and development of long-lived Iron Age settlements in the East Midlands, and offers new insights into the role of these well-established communities."

Contacts and sources:
John Thomas
University of Leicester
The results of the project to date are published in the current issue of British Archaeology magazine, which will be available from 6 December.
on November 27, 2017