To the Poles: How Storms Will Veer in a Warmer World

Under global climate change, the Earth's climatic zones will shift toward the poles. This is not just a future prediction; it is a trend that has already been observed in the past decades. The dry, semi-arid regions are expanding into higher latitudes, and temperate, rainy regions are migrating poleward.

In a paper that that was recently published in Nature Geoscience, Weizmann Institute of Science researchers provide new insight into this phenomenon by discovering that mid-latitude storms are steered further toward the poles in a warmer climate. Their analysis, which also revealed the physical mechanisms controlling this phenomenon, involved a unique approach that traced the progression of low-pressure weather systems both from the outside - in their movement around the globe - and from the inside - analyzing the storms' dynamics.

Prof. Yohai Kaspi of the Institute's Earth and Planetary Sciences Department explains that the Earth's climatic zones roughly follow latitudinal bands. Storms mostly move around the globe in preferred regions called "storm tracks," forming over the ocean and generally traveling eastward and somewhat poleward along these paths. Thus, a storm that forms in the Atlantic off the East Coast of the US at a latitude of around 40N will reach Europe in the region of latitude 50N. Until recently, however, this inclination to move in the direction of the nearest pole was not really understood. Dr. Talia Tamarin in Kaspi's group solved this fundamental question in her doctoral research.

This is a Google earth storm track. 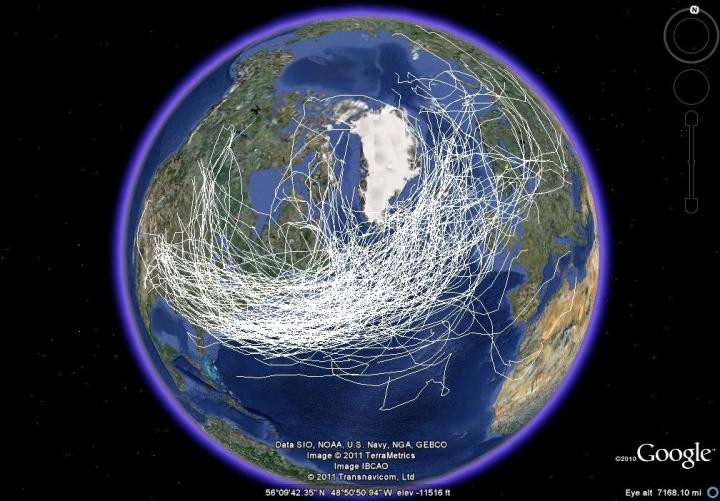 
Kaspi: "From the existing climate models, one can observe the average storm tracks, but it is hard to prove cause and effect from these. They only show us where there are relatively more or fewer storms. Another approach is following individual storms; however, we must deal with chaotic, noisy systems that are heavily dependent on the initial conditions, meaning no storm is exactly like another. Talia developed a method that combines these two approaches. She applied a storm-tracking algorithm to simplified atmospheric circulation models in which thousands of storms are generated, thus eliminating the dependence on initial conditions. This allowed her to understand how such storms develop over time and space, and what controls their movement." Even such simplified models involve calculations that require several days of computation in one of the Weizmann Institute's powerful computer clusters.

In the present study, to understand how the movement of storms may change in a warmer world, Tamarin and Kaspi applied the same method to full-complexity simulations of climate change predictions. Their analysis showed that the tendency of storm tracks to veer in the direction of the poles intensifies in warmer conditions. They discovered that two processes are responsible for this phenomenon. One is connected to the vertical structure and circulation near the tops of these weather systems. A certain type of flow that is necessary for them to grow also steers the storms toward the pole, and these flows are expected to become stronger when average temperatures rise.

The second process is connected to the energy tied up in the water vapor in such storms. In global warming, the hotter air will contain more water vapor, and thus more energy will be released when the vapor condenses to drops. "The hottest, wettest air is circulating up the eastern flank of the storm - to the northern side - and releasing energy there," says Tamarin. "This process pushes the storm northward (or southward in the southern hemisphere), and this effect will also be stronger in a warmer climate."

The models of climate change predict that if average global temperatures rise by four degrees over the next 100 years, storms will deviate poleward from their present tracks by two degrees of latitude. The research performed at the Weizmann Institute of Science shows that part of this will be due to the mechanism they demonstrated, and the other part is tied to the fact that storms are born at a higher latitude in a warmer world. "The model Talia developed gives us both qualitative information on the mechanisms that steer storms toward the poles and quantitative means to predict how these will change in the future," says Kaspi. "Although two degrees may not sound like a lot, the resulting deviation in temperature and rain patterns will have a significant effect on climate zones," he adds.