They Seek to Map All of Creation: "No Part of the Sky Will Be Hidden"

Scientists from across the world hope to create the most complete map of the universe ever by looking at the entire spectrum over eons of time. and sharing that information.

The next generation of the Sloan Digital Sky Survey (SDSS-V), directed by Carnegie’s Juna Kollmeier, will move forward with mapping the entire sky following a $16 million grant from the Alfred P. Sloan Foundation. The grant will kickstart a groundbreaking all-sky spectroscopic survey for a next wave of discovery, anticipated to start in 2020.


IR image of the inner Galaxy, showing the plane and bulge of the Galaxy full of stars and dust. APOGEE-1 used new IR instrumentation, which is less affected by the extinction from interstellar dust, to study stars within the disk (now continued in APOGEE-2).

*The Sloan Digital Sky Survey has been one of the most-successful and influential surveys in the history of astronomy, creating the most-detailed three-dimensional maps of the universe ever made, with deep multi-color images of one third of the sky, and spectra for more than three million astronomical objects.

SDSS-V will be an all-sky, multi-epoch spectroscopic survey, yielding spectra of over 6 million objects during its lifetime.

Under Kollmeier’s leadership, the survey’s fifth generation will build off the earlier SDSS incarnations, but will break new ground by pioneering all-sky observations, and by monitoring over time the changes in a million objects.

This artist's impression shows a cutaway view of the parts of the Universe that SDSS-V will study. SDSS-V will study millions of stars to create a map of the entire Milky Way. Farther out, the survey will get the most detailed view yet of the largest nearby galaxies like Andromeda in the Northern hemisphere and the Large Magellanic Cloud in the Southern hemisphere. Even farther out, the survey will measure quasars, bright points of light powered by matter falling into giant black holes.

“With observations in both hemispheres, no part of the sky will be hidden from SDSS-V,” she said. In the tradition of previous Sloan Surveys, SDSS-V is committed to making its data publicly available in a format that is helpful to a broad range of users, from the youngest students to both amateur and professional astronomers.

“SDSS-V is proof that great science knows no borders and stands out for its commitment to diversity,” says Dr. Evan S. Michelson, Program Director at the Sloan Foundation. “It will create unparalleled opportunities for all scientists to participate in answering some of the most-exciting questions in astronomy. We are thrilled to be supporting Juna Kollmeier, her team at the Carnegie Institution for Science, and the entire SDSS Collaboration.” 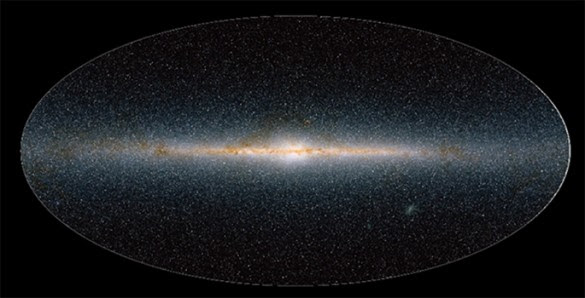 
"SDSS has long been a great example of hundreds of astronomers of all ages, from many continents, working together on a big project. We're excited to continue that tradition!" adds Gail Zasowski, a professor at the University of Utah and the SDSS-V Spokesperson.

SDSS-V will be carried out in two hemispheres, at Apache Point Observatory (APO) and Las Campanas Observatory (LCO). Multi-object fiber spectroscopy will be obtained with two 2.5m telescopes, each feeding the near-infrared APOGEE and optical BOSS spectrographs, for the Milky Way Mapper and Black Hole Mapper surveys. The Local Volume Mapper will make use of integral-field spectroscopy, mostly at smaller telescopes at APO and LCO. 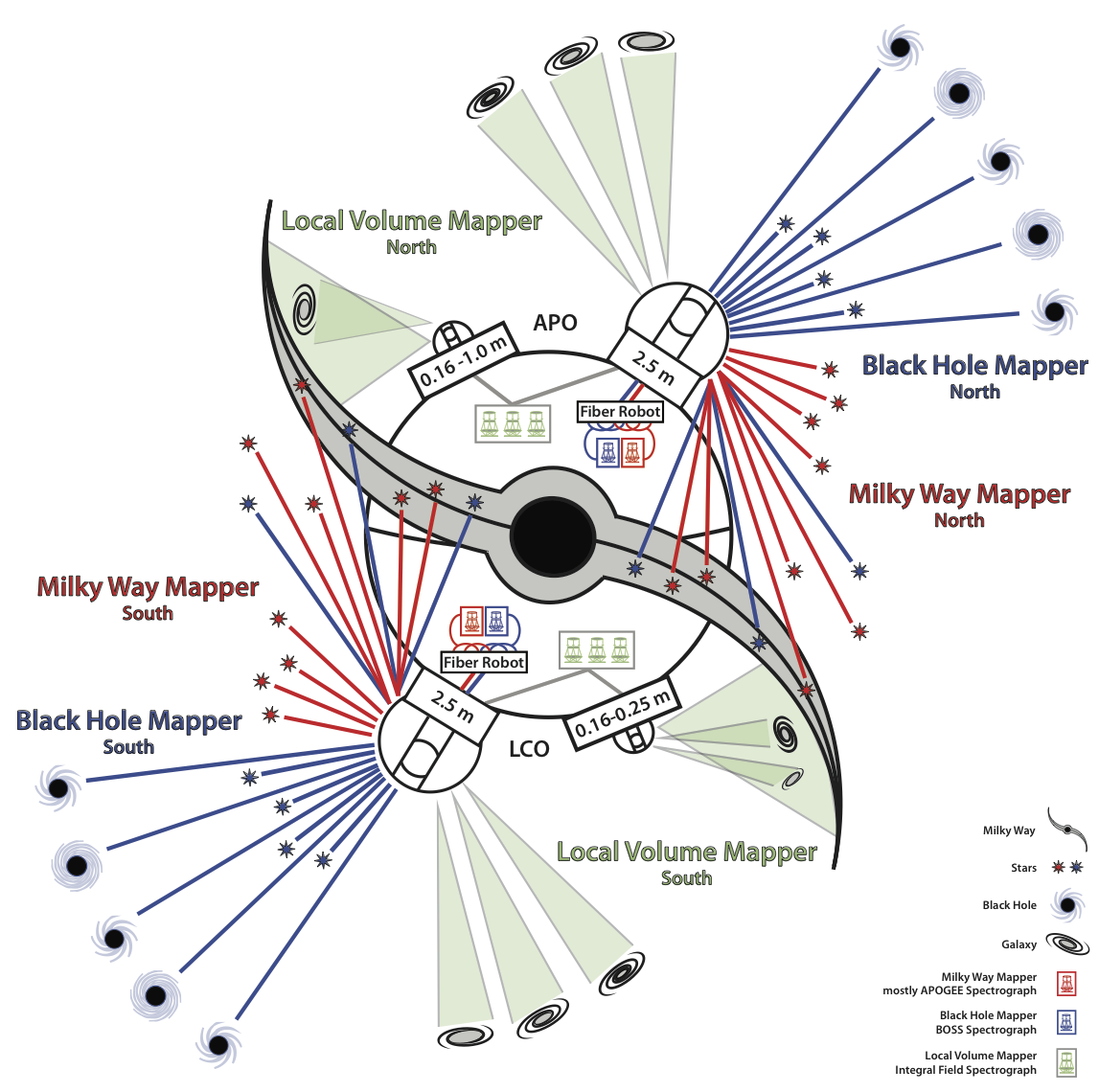 “I am delighted to see SDSS-V move forward and to see Carnegie’s collaboration with the survey expand,” said Carnegie Observatories Director John Mulchaey.

SDSS-V will make use of both optical and infrared spectroscopy, to observe not only in two hemispheres, but also at two wavelengths of light. It will take advantage of the recently installed second APOGEE spectrograph on Carnegie’s du Pont telescope. Both it and its twin on Apache Point penetrate the dust in our galaxy that confounds optical spectrographs to obtain high-resolution spectra for hundreds of stars at infrared wavelengths. In the optical wavelengths, the survey’s twin BOSS spectrographs can each obtain simultaneous spectra for 500 stars and quasars. What’s more, a newly envisioned pair of Integral Field Unit spectrographs can each obtain nearly 2,000 spectra contiguously across objects in the sky. 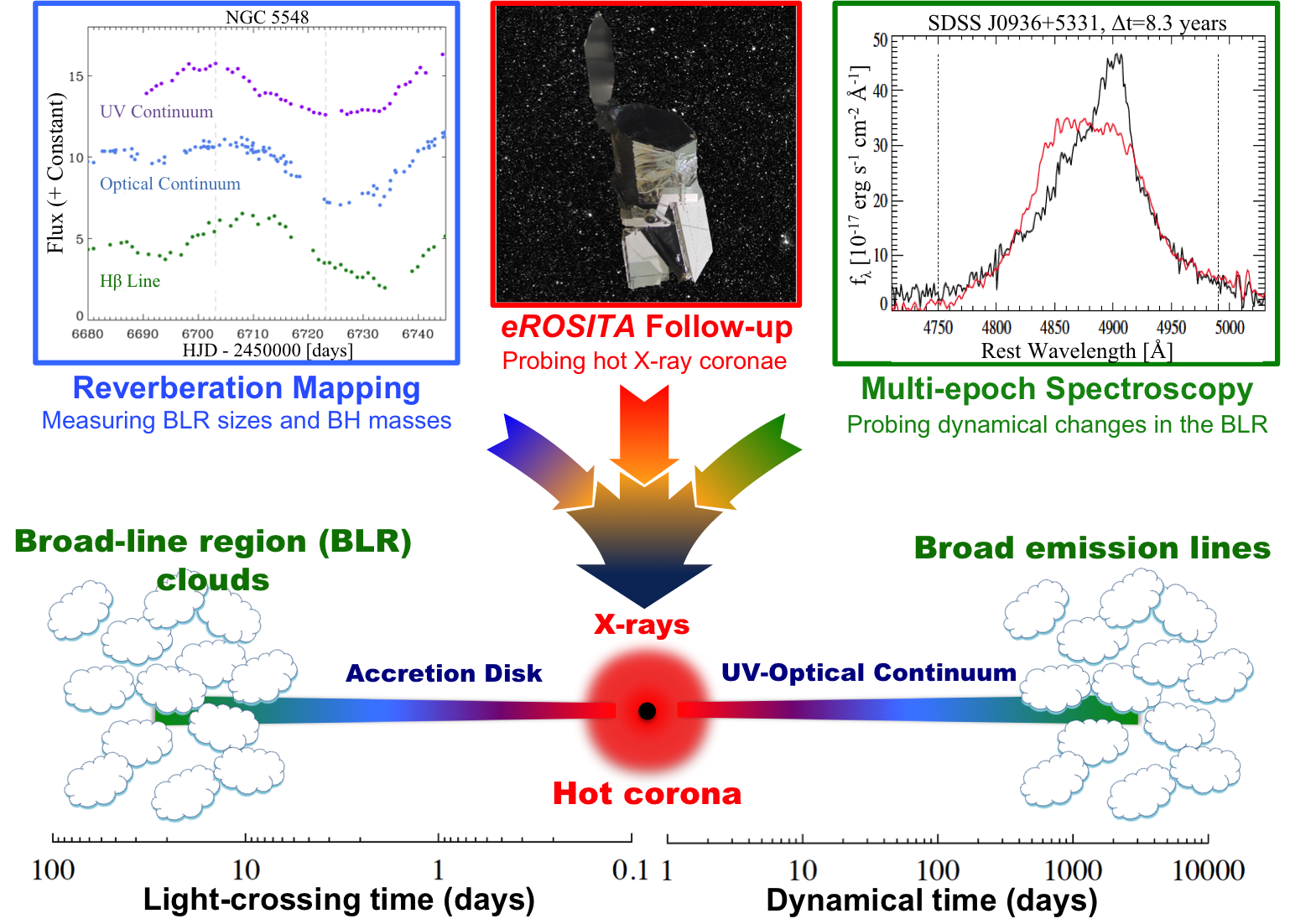 SDSS-V will consist of three projects, each mapping different components of the universe: The Milky Way Mapper, the Black Hole Mapper and the Local Volume Mapper. The first Mapper focuses on the formation of the Milky Way and its stars and planets. The second will study the formation, growth, and ultimate sizes of the supermassive black holes that lurk at the centers of galaxies. The Local Volume Mapper will create the first complete spectroscopic maps of the most-iconic nearby galaxies.

Local Volume Mapper footprint and sampling, showing in the centre the Milky Way (blue) on top of the Milky Way Mapper target density map. Zooming into the Orion region (lower right), APOGEE targets are overlaid in yellow. Other bottom panels show the Large Magellanic Cloud (including the 30 Doradus star forming region), while the top panel shows the LVM IFU field-of-view on M31. A statistical sample of H II regions is shown in green, and will be observed at 20 pc resolution across M31, and at ~ 50 pc resolution across other nearby galaxies, connecting small scale physics and large scale galaxy evolution. 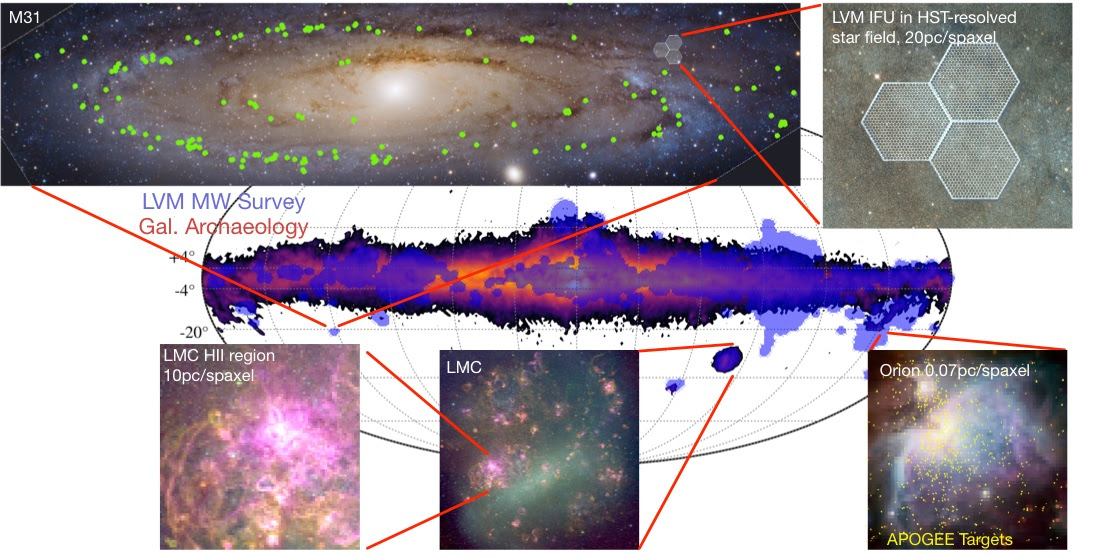 “These data will enable scientists to study the chemical composition of galaxies and the interactions between stars, gas, and supernova explosions in unprecedented detail,” explained D. Michael Crenshaw, Chair of ARC’s Board of Governors and Georgia State University’s Department of Physics and Astronomy.

“By surveying the sky rapidly and repeatedly like no spectroscopic survey has done before, SDSS-V will not only vastly improve the data to answer known unknown questions, but it can—perhaps more importantly—venture into astrophysical terra incognita.” said Hans-Walter Rix, the SDSS-V project scientist and director at the Max Planck Institute of Astronomy.

The SDSS “Orange Spider”. This illustrates the wealth of information on scales both small and large available in the SDSS I/II and III imaging. The picture in the top left shows the SDSS view of a small part of the sky, centered on the galaxy Messier 33 (M33). The middle and right top pictures are further zoom-ins on M33. The figure at the bottom is a map of the whole sky derived from the SDSS image. Visible in the map are the clusters and walls of galaxies that are the largest structures in the entire universe. 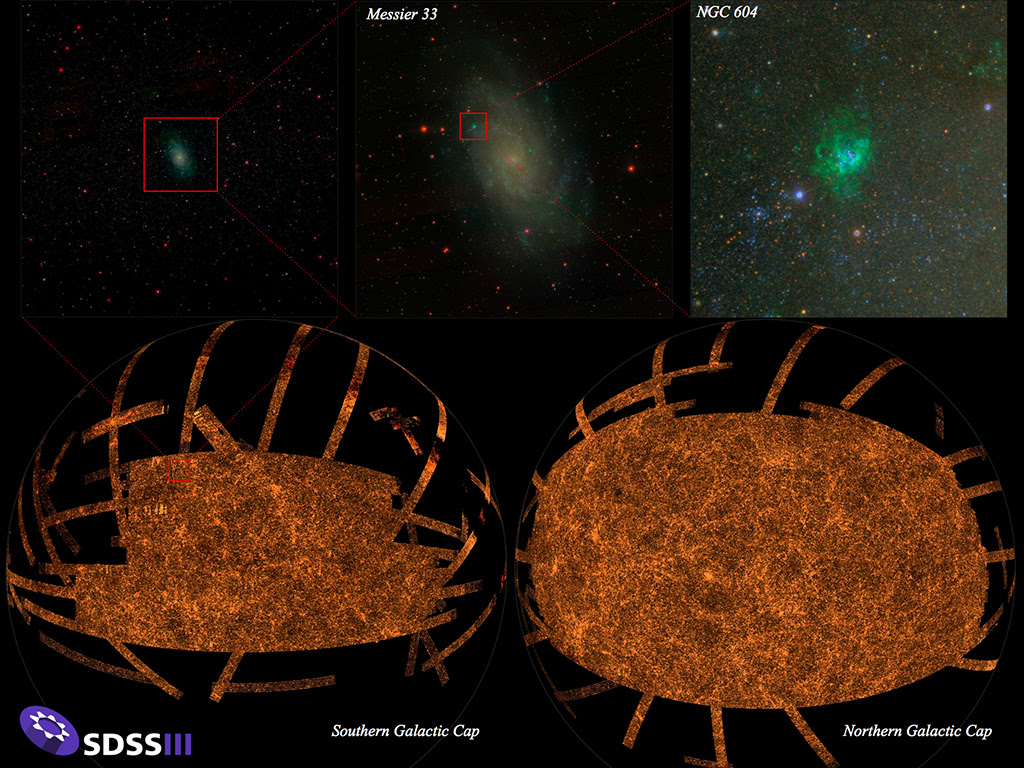 “It’s wonderful to see the scope and breadth of the next phase of this amazing survey take shape,” said Mike Blanton of New York University, the current SDSS Director and chair of the SDSS-V Steering Committee.

Perhaps when  the data is in, we  as a species will be closer to answering the questions posed by the title of  painting by artist Paul Gauguin "Where Do We Come From? What Are We? Where Are We Going?"

Explore the Universe at SDSS Skyserver