Barley continues to be the staple diet of people living in this Dolpo Valley of Nepal, a harsh environment at 13,000 feet above sea level. Research suggests that ancient barley cultivation moved into China after being farmed in high altitude regions such as this along the southern edge of the Tibetan Plateau. 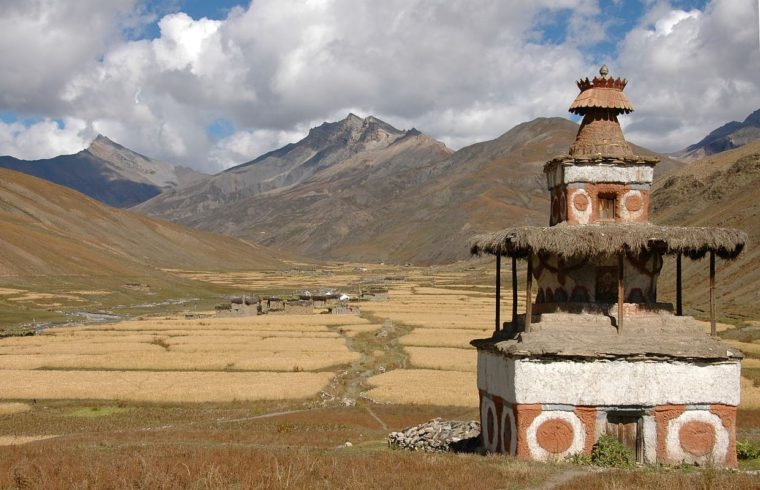 First domesticated 10,000 years ago in the Fertile Crescent of the Middle East, wheat and barley took vastly different routes to China, with barley switching from a winter to both a winter and summer crop during a thousand-year detour along the southern Tibetan Plateau, suggests new research from Washington University in St. Louis.

"The eastern dispersals of wheat and barley were distinct in both space and time," said Xinyi Liu, assistant professor of archaeology in Arts & Sciences, and lead author of this study published in the journal PLOS One.

"Wheat was introduced to central China in the second or third millennium B.C., but barley did not arrive there until the first millennium B.C.," Liu said. "While previous research suggests wheat cultivation moved east along the northern edge of the Tibetan Plateau, our study calls attention to the possibility of a southern route (via India and Tibet) for barley."

Based on the radiocarbon analysis of 70 ancient barley grains recovered from archaeological sites in China, India, Kyrgyzstan and Pakistan, together with DNA and ancient textual evidence, the study tackles the mystery of why ancient Chinese farmers would change the seasonality of a barley crop that originated in a latitudinal range similar to their own.

The answer, Liu explains, is that barley changed from a winter to summer crop during its passage to China, a period in which it spent hundreds of years evolving traits that allowed it to thrive during short summer growing seasons in the highlands of Tibet and northern India.

"Barley arrives in central China later than wheat, bringing with it a degree of genetic diversity in relation to flowering time responses," Liu said. "We infer such diversity reflects preadaptation of barley varieties along that possible southern route to seasonal challenges, particularly the high altitude effect, and that led to the origins of eastern spring barley."

Liu's research on the dispersal of wheat and barley cultivation adds a new chapter to our understanding of prehistoric food globalization, a process that began about 5000 B.C. and intensified around 1500 B.C. This ongoing research traces the geographic paths and dispersal times of crops and cultivation systems that expanded across Eurasia and eventually worldwide, from points of origination in North Africa and West, East and South Asia. The eastern expansion of wheat and barley is a key story in this process.

Map of Eurasia shows the oldest radiocarbon-measured dates (B.C.) for individual grains of barley recovered from each region. Wheat and barley arrived in South Asia about a millennium before they arrived in East Asia. Free-threshing wheats spread to China along a route to the north of the Tibetan Plateau. Naked barley is likely to have been introduced to China via southern highland routes that remain to be identified. 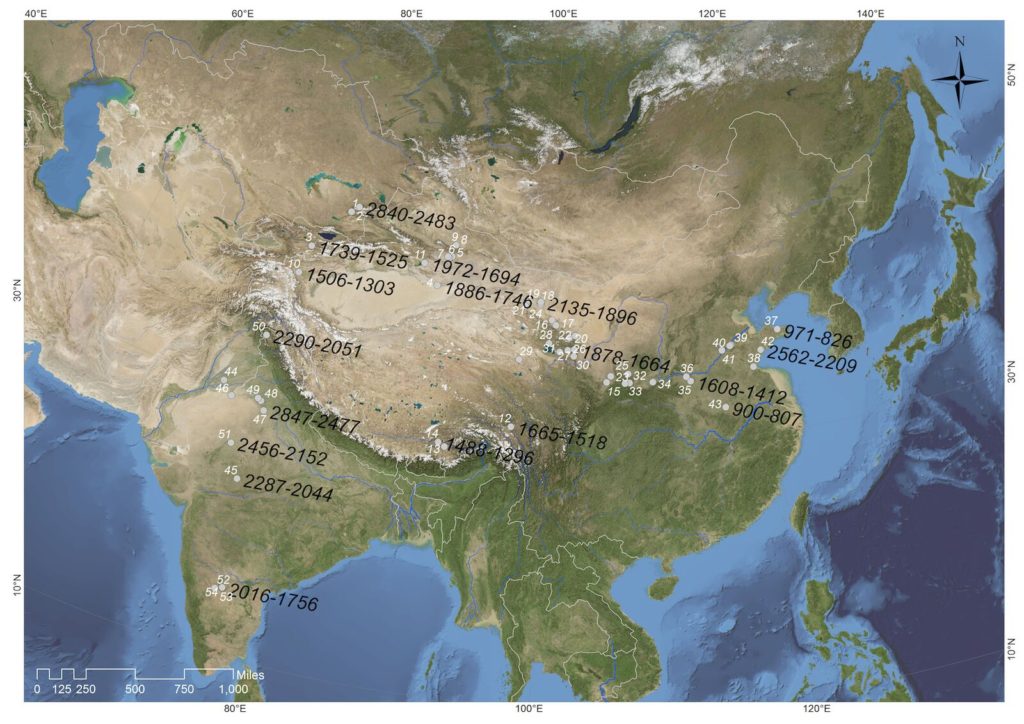 Image: Courtesy of PLOS One


In the hot, arid southwest Asian region where wheat and barley were first domesticated, they were grown between autumn and subsequent spring to complete their life cycles before arrival of summer droughts. These early domesticated strains included genes carried over from wild grasses that triggered flowering and grain production as days grew longer with the approach of summer.

Because of this spring-flowering life cycle, early domesticated varieties of wheat and barley were poorly suited for cultivation in northern European climates with severe winters and a different day length pattern. Previous research by the second author in this study, Diane Lister, a postdoctoral research associate at the University of Cambridge, has shown that barley and wheat adapted to European climates by evolving a mutation that switched off the genes that made flowering sensitive to increases in day length, allowing them to be sown in spring and harvested in fall.

Liu's study shows that barley evolved similar mutations on its way to China as farmers pushed its cultivation high into the mountains of the Tibetan Plateau. By the time barley reached central China, its genetic makeup had been altered so that flowering was no longer triggered by day length, allowing it to be planted in both spring and fall.

The ancient movement of wheat and barley cultivation into China offers two distinct stories about the adaption of newly introduced crops into an existing agrarian/culinary system, Liu said.

Ancient wheat that traveled to China along Silk Road routes also was genetically modified by farmers who selected strains that produced small-sized grains more suited to a Chinese cuisine that prepared them by boiling or steaming the whole grains. Larger wheat grains evolved in Europe where wheat was traditionally ground for flour.

Along the southern migration route for barley, the main story is the flowering time -- changed by farmers to gain control over the seasonal pressures of high-altitude cultivation, Liu said.

Recovery of these ancient grains has become more routine in the last decade as scholars mastered a flotation technique that allows the separation of seeds and other minute biological material from excavated dirt immersed in a bucket of water. This approach, pioneered in China by the third author of this study, Zhijun Zhao, a professor of archaeology at the Chinese Academy of Social Sciences, has transformed the understanding of ancient farming in China.

Geographic distributions of the non-responsive haplotypes A and B of the Ppd-H1 gene in extant landrace barley. 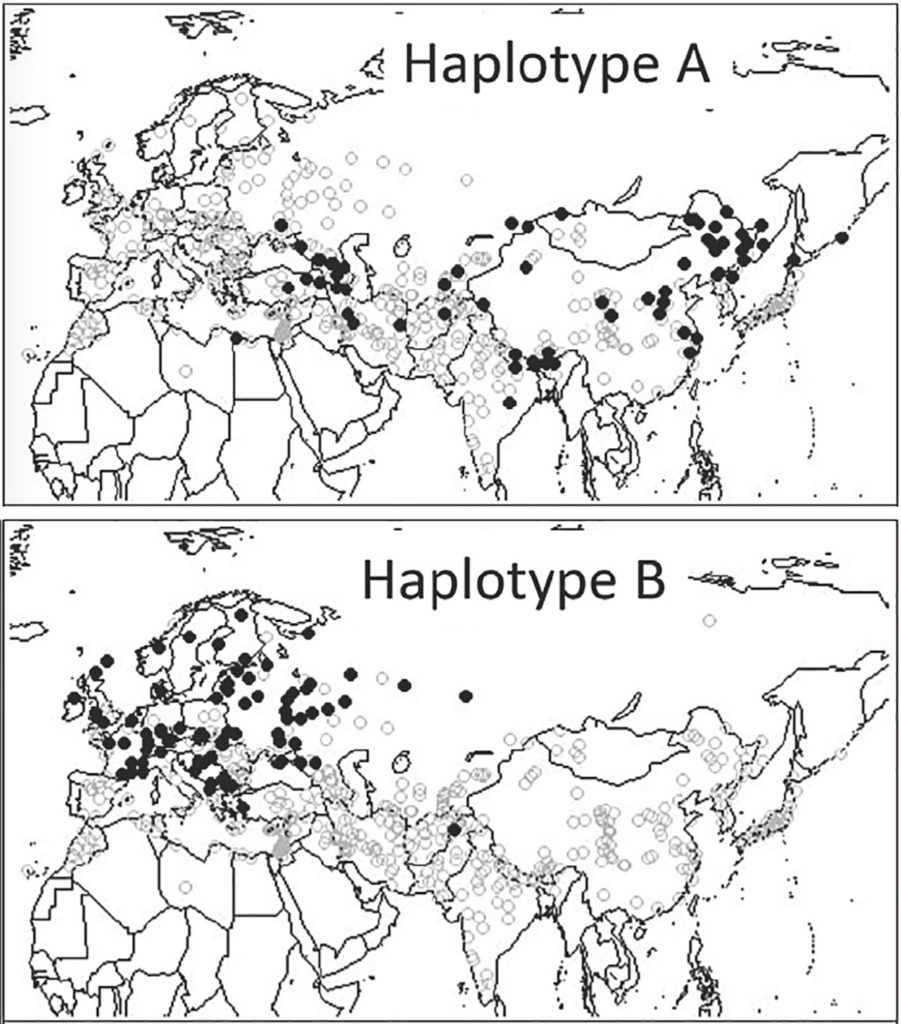 Image: Courtesy of PLOS One

The PLOS One findings reflect the contributions of 26 co-authors, including archaeologists who recovered the grains and those who analyzed them at leading archaeobotanical laboratories in the U.S., U.K., China and India. The team also includes leading experts for barley archaeogenetics, radiocarbon analysis and agricultural history around the globe.

"We've recently realized how much prehistoric crops moved around, on a scale much greater than anyone had envisaged," said senior co-author Martin Jones, the George Pitt-Rivers Professor of Archaeological Science at Cambridge. "An intensive study of chronology, genetics and crop records now reveals how those movements laid the agrarian foundations of Bronze Age civilizations, enabling the control of seasons, and opening the way for rotation and multi-cropping."


Citation: Journey to the east: Diverse routes and variable flowering times for wheat and barley en route to prehistoric China  http://dx.doi.org/10.1371/journal.pone.0187405
on November 26, 2017