The first evidence for Julius Caesar's invasion of Britain has been discovered by archaeologists from the University of Leicester. The findings will be explored as part of the BBC Four's Digging For Britain on Wednesday 29 November.

Based on new evidence, the team suggests that the first landing of Julius Caesar's fleet in Britain took place in 54BC at Pegwell Bay on the Isle of Thanet, the north--east point of Kent.

This location matches Caesar's own account of his landing in 54 BC, with three clues about the topography of the landing site being consistent with him having landed in Pegwell Bay: its visibility from the sea, the existence of a large open bay, and the presence of higher ground nearby. 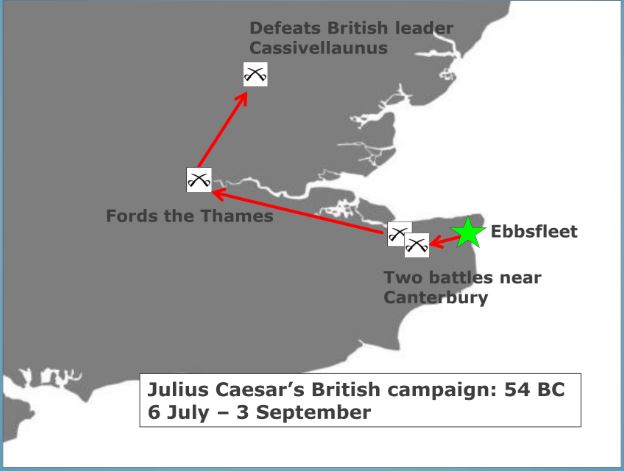 The University of Leicester project, which is funded by the Leverhulme Trust, was prompted by the discovery of a large defensive ditch in archaeological excavations before a new road was built. The shape of the ditch at Ebbsfleet, a hamlet in Thanet, is very similar to some of the Roman defences at Alésia in France, where the decisive battle in the Gallic War took place in 52 BC.

The site, at Ebbsfleet, on the Isle of Thanet in north-east Kent overlooking Pegwell Bay, is now 900 m inland but at the time of Caesar's invasions it was closer to the coast. The ditch is 4-5 metres wide and 2 metres deep and is dated by pottery and radiocarbon dates to the 1st century BC.

The size, shape, date of the defences at Ebbsfleet and the presence of iron weapons including a Roman pilum (javelin) all suggest that the site at Ebbsfleet was once a Roman base of 1st century BC date.

This is the Ebbsfleet 2016 defensive ditch under excavation. 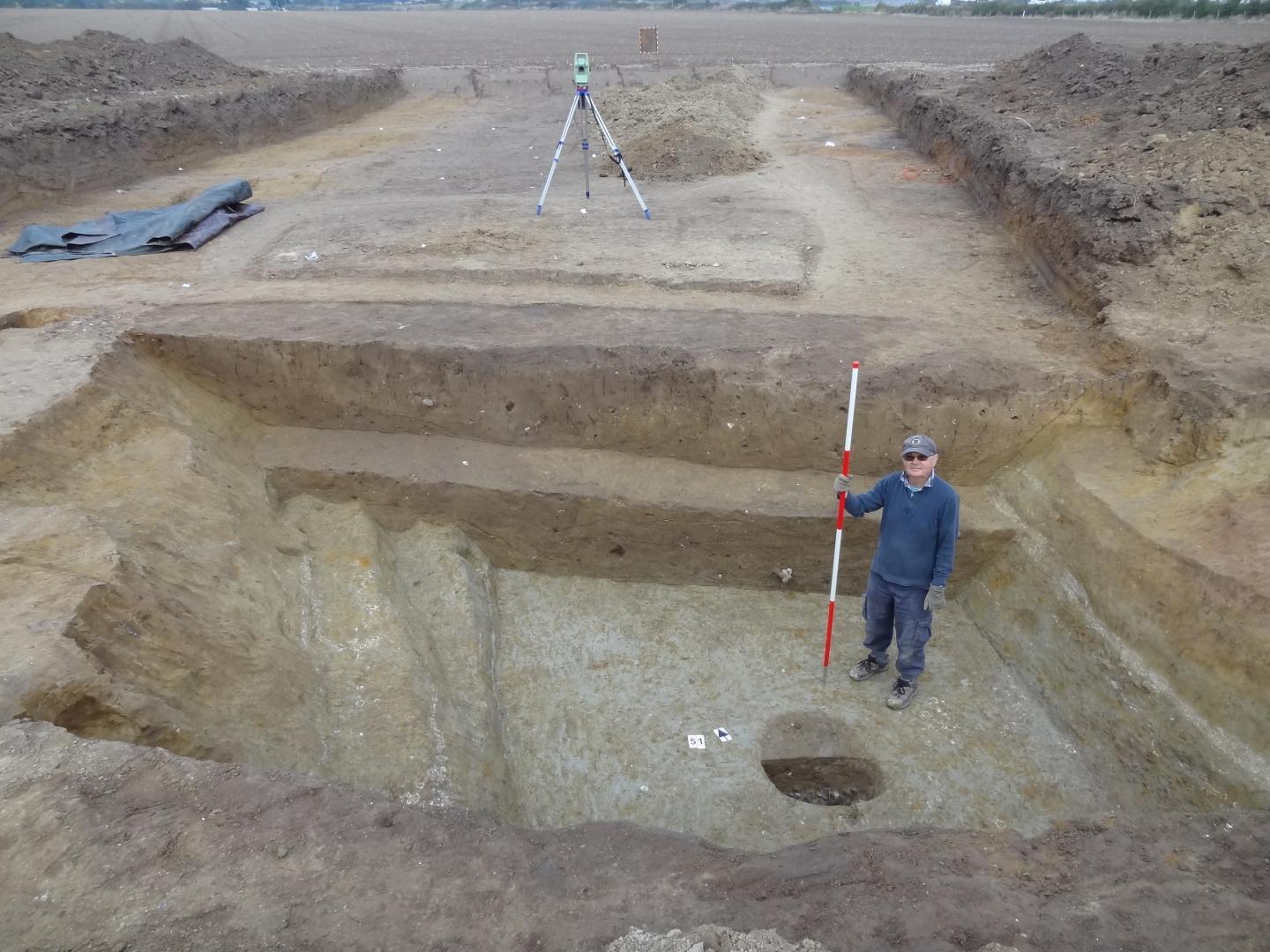 The archaeological team suggest the site may be up to 20 hectares in size and it is thought that the main purpose of the fort was to protect the ships of Caesar's fleet that had been drawn up on to the nearby beach.

Dr Andrew Fitzpatrick, Research Associate from the University of Leicester's School of Archaeology and Ancient History said: "The site at Ebbsfleet lies on a peninsular that projects from the south-eastern tip of the Isle of Thanet. Thanet has never been considered as a possible landing site before because it was separated from the mainland until the Middle Ages.

"However, it is not known how big the Channel that separated it from the mainland (the Wantsum Channel) was. The Wantsum Channel was clearly not a significant barrier to people of Thanet during the Iron Age and it certainly would not have been a major challenge to the engineering capabilities of the Roman army."

Caesar's own account of his landing in 54 BC is consistent with the landing site identified by the team.

This is the Ebbsfleet excavation with Pegwell Bay & Ramsgate. 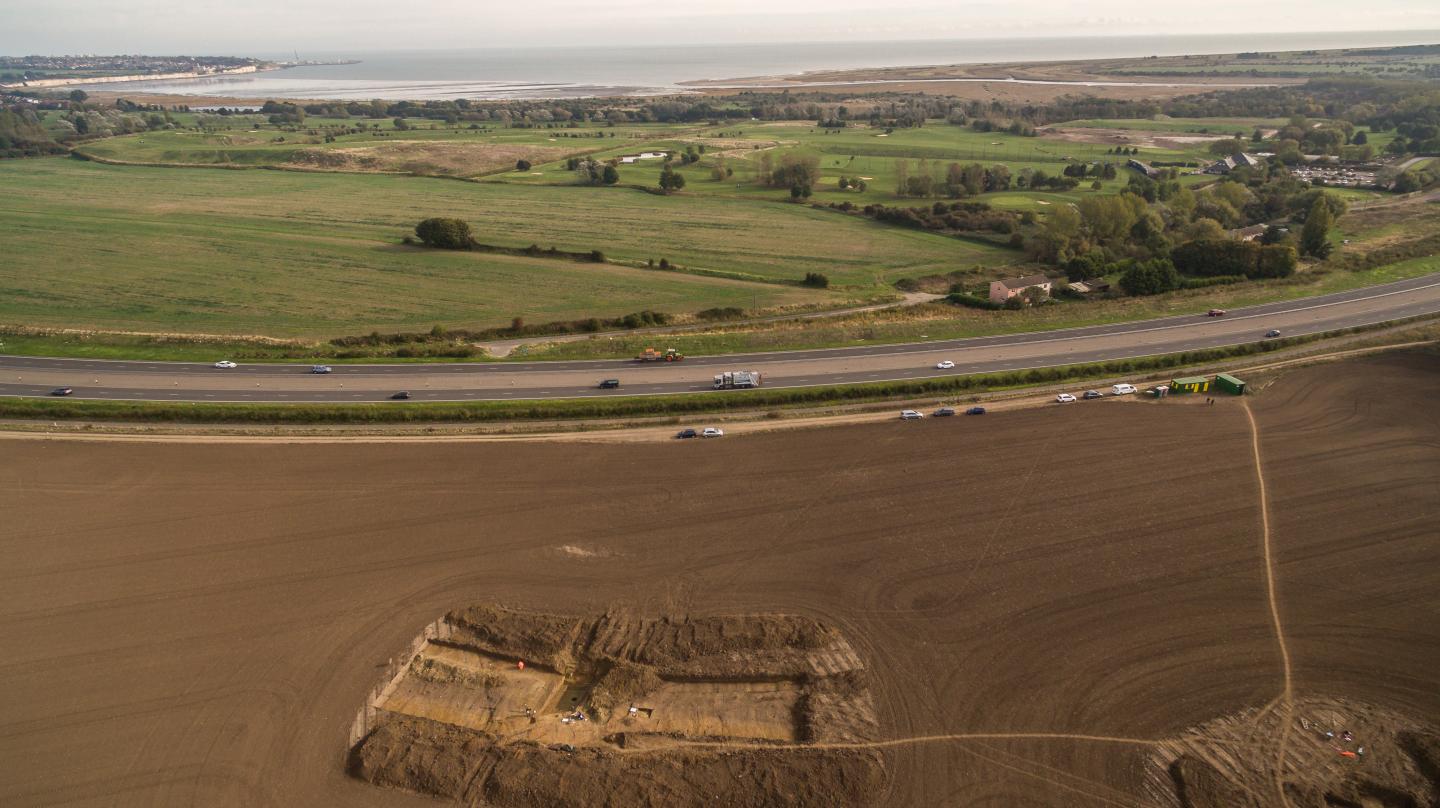 
Dr Fitzpatrick explained: "Sailing from somewhere between Boulogne and Calais, Caesar says that at sunrise they saw Britain far away on the left hand side. As they set sail opposite the cliffs of Dover, Caesar can only be describing the white chalk cliffs around Ramsgate which were being illuminated by the rising sun.

"Caesar describes how the ships were left at anchor at an even and open shore and how they were damaged by a great storm. This description is consistent with Pegwell Bay, which today is the largest bay on the east Kent coast and is open and flat. The bay is big enough for the whole Roman army to have landed in the single day that Caesar describes. The 800 ships, even if they landed in waves, would still have needed a landing front 1-2 km wide. 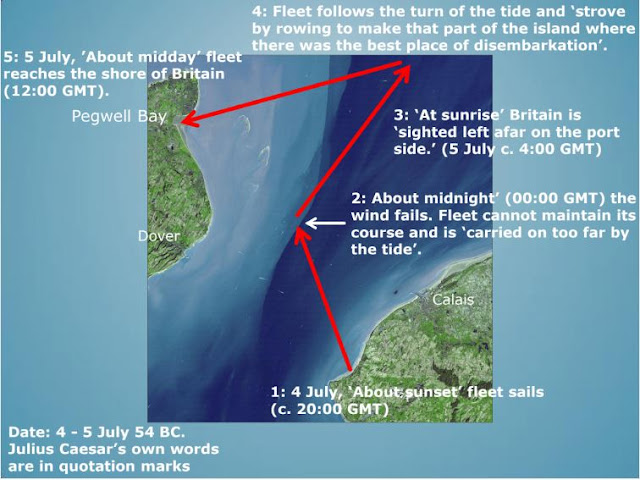 "Caesar also describes how the Britons had assembled to oppose the landing but, taken aback by the size of the fleet, they concealed themselves on the higher ground. This is consistent with the higher ground of the Isle of Thanet around Ramsgate.

"These three clues about the topography of the landing site; the presence of cliffs, the existence of a large open bay, and the presence of higher ground nearby, are consistent with the 54 BC landing having been in Pegwell Bay."

The last full study of Caesar's invasions was published over 100 years ago, in 1907.

This is a 3 Lidar model of topography of Thanet showing Ebbsfleet. 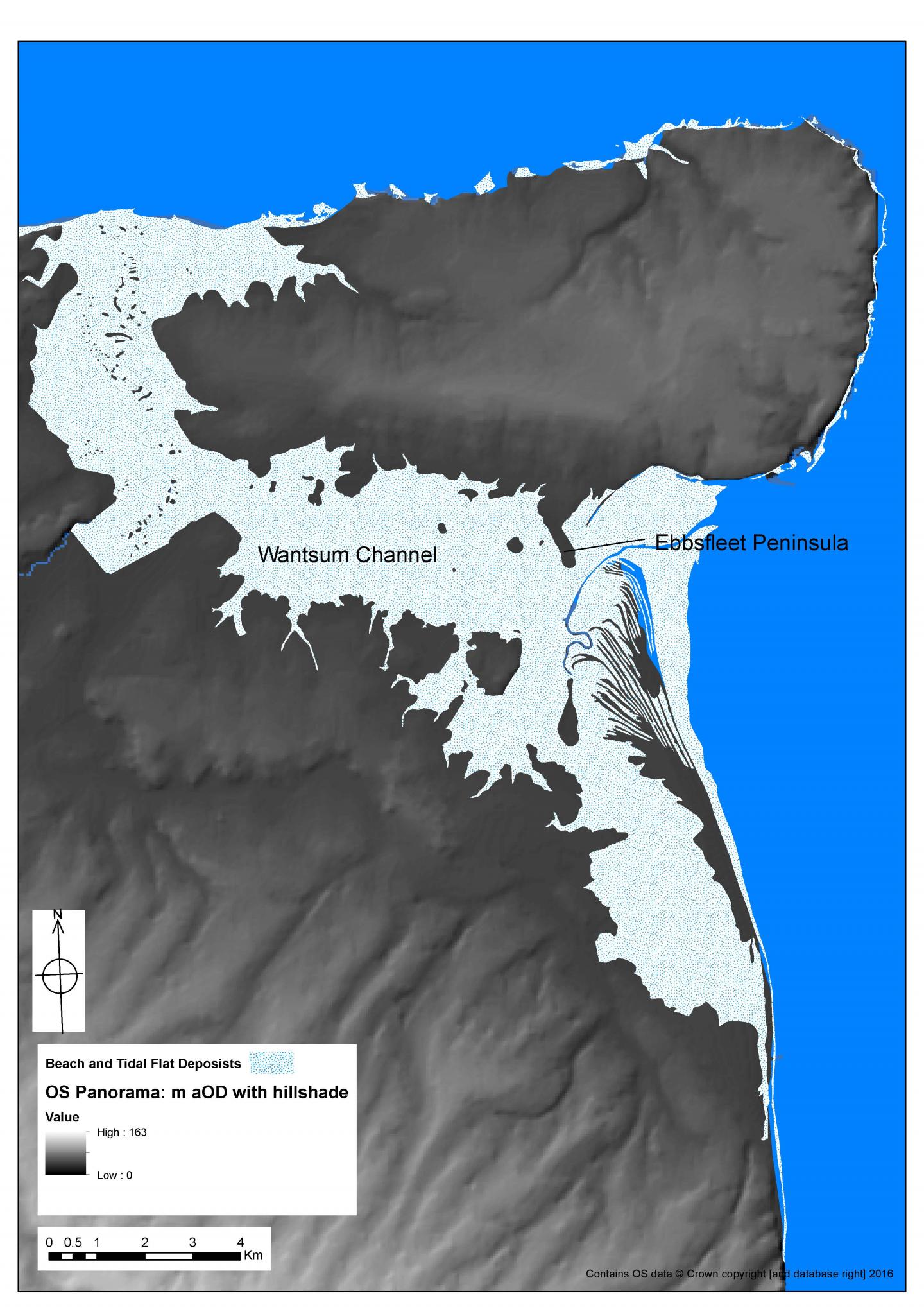 The team challenge this notion by suggesting that in Rome the invasions were seen as a great triumph. The fact that Caesar had crossed the sea and gone beyond the known world caused a sensation. At this time victory was achieved by defeating the enemy in battle, not by occupying their lands.

They also suggest that Caesar's impact in Briton had long-standing effects which were seen almost 100 years later during Claudius's invasion of Briton.

Professor Colin Haselgrove, the principal investigator for the project from the University of Leicester, explained: "It seems likely that the treaties set up by Caesar formed the basis for alliances between Rome and British royal families. This eventually resulted in the leading rulers of south-east England becoming client kings of Rome. Almost 100 years after Caesar, in AD 43 the emperor Claudius invaded Britain. The conquest of south-east England seems to have been rapid, probably because the kings in this region were already allied to Rome.

"This was the beginning of the permanent Roman occupation of Britain, which included Wales and some of Scotland, and lasted for almost 400 years, suggesting that Claudius later exploited Caesar's legacy."

Kent County Council cabinet member Matthew Balfour said: "The council is delighted to have been able to work in partnership with the University of Leicester to help build on the incredible findings made during our road development. The archaeology of Thanet is very special and we are particularly pleased that such important findings have been made with the involvement of volunteers from the Kent community. When we built the road we ensured that the community played a big part in the archaeological works and it is satisfying to see the legacy of our original work continuing."

Principal Archaeological Officer for Kent County Council Simon Mason, who oversaw the original road excavations carried out by Oxford Wessex Archaeology, said: "Many people do not realise just how rich the archaeology of the Isle of Thanet is. Being so close to the continent, Thanet was the gateway to new ideas, people, trade and invasion from earliest times. This has resulted in a vast and unique buried archaeological landscape with many important discoveries being regularly made. The peoples of Thanet were once witness to some of the earliest and most important events in the nation's history: the Claudian invasion to start the period of Roman rule, the arrival of St Augustine's mission to bring Christianity and the arrival of the Saxons celebrated through the tradition of Hengist and Horsa. It has been fantastic to be part of a project that is helping to bring another fantastic chapter, that of Caesar, to Thanet's story." 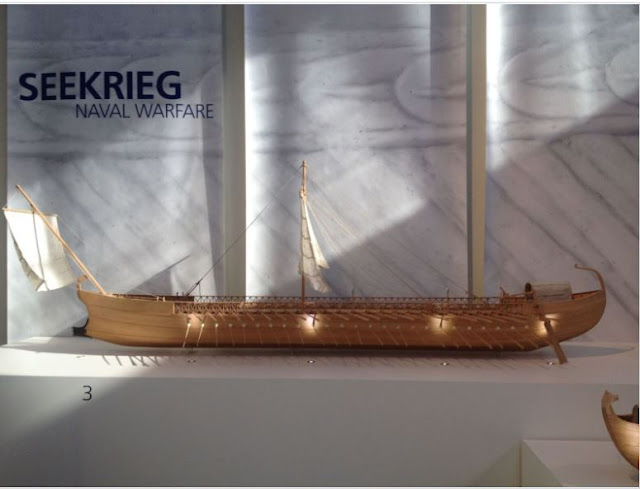 Andrew Mayfield said: "The project has been a fantastic opportunity for us to explore the extraordinary archaeology of Thanet alongside the University of Leicester team. Volunteers, both locally from Thanet and further afield in Kent, enthusiastically give up their time and the success of the dig is very much down to their hard work and commitment. We were also lucky to welcome students from both Canterbury Universities, a local branch of the Young Archaeologists Club as well as the local school. This was very much a team effort."

The findings will be explored further as part of the BBC Four's Digging For Britain. The East episode, in which the Ebbsfleet site appears, will be the second programme in the series, and will be broadcast on Wednesday 29 November 2017.