Researchers at Washington State University and 13 other institutions have found that the arc of prehistory bends towards economic inequality.

In the largest study of its kind, the researchers saw disparities in wealth mount with the rise of agriculture, specifically the domestication of plants and large animals, and increased social organization.

Their findings, published this week in the journal Nature, have profound implications for contemporary society, as inequality repeatedly leads to social disruption, even collapse, said Tim Kohler, lead author and WSU Regents professor of archaeology and evolutionary anthropology at WSU. The United States, he noted, currently has one of the highest levels of inequality in the history of the world.

“Inequality has a lot of subtle and potentially pernicious effects on societies,” Kohler said.


The study gathered data from 63 archaeological sites or groups of sites. Comparing house sizes within each site, researchers assigned Gini coefficients, common measures of inequality developed more than a century ago by the Italian statistician and sociologist Corrado Gini. In theory, a country with complete wealth equality would have a Gini coefficient of 0, while a country with all the wealth concentrated in one household would get a 1.

The researchers found that hunter-gatherer societies typically had low wealth disparities, with a median Gini of .17. Their mobility would make it hard to accumulate wealth, let alone pass it on to subsequent generations. Horticulturalists — small-scale, low-intensity farmers — had a median Gini of .27. Larger scale agricultural societies had a media Gini of .35.

To the researchers’ surprise, inequality kept rising in the Old World, while it hit a plateau in the New World, said Kohler. The researchers attribute this to the ability of Old World societies “to literally harness big domesticated mammals like cattle and eventually horses and water buffalo,” Kohler said.

Draft animals, which were not available in the New World, let richer farmers till more land and expand into new areas. This increased their wealth while ultimately creating a class of landless peasants.

The Old World also saw the arrival of bronze metallurgy and a mounted warrior elite that increased Ginis through large houses and territorial conquests. 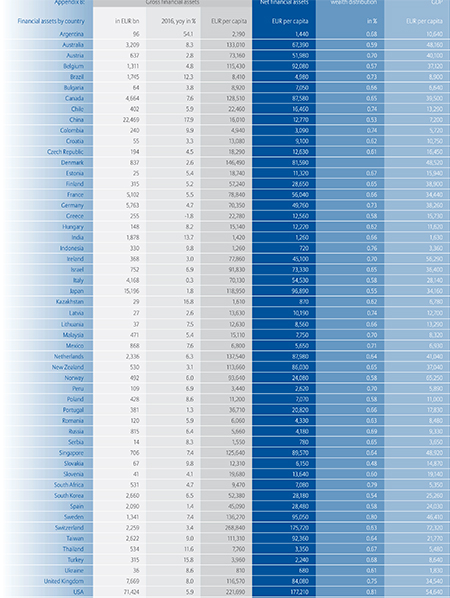 The researchers’ models put the highest Ginis in the ancient Old World at .59, close to that of contemporary Greece’s .56 and Spain’s .58. It is well short of China’s .73 and the United States .80, a 2000 figure cited in the Nature paper. The 2017 Allianz Global Wealth Report, puts the U.S. Gini at .81, and Kohler has seen the U.S. Gini pegged at .85, “which is probably the highest wealth inequality for any developed country right now.”

This worries him for several reasons.

Societies with high inequality have low social mobility. Kohler pointed to a Science magazine paper from earlier this year that found rates of mobility have fallen from 90 percent for U.S. children born in 1940 to 50 percent for children born in the 1980s. The results, wrote the researchers, “imply that reviving the ‘American dream’ of high rates of absolute mobility would require economic growth that is shared more broadly across the income distribution.”

Other studies have found that unequal societies tend to have poorer health, while more equal societies have higher life expectancies, trust and a willingness to help others, said Kohler.

““People need to be aware that inequality can have deleterious effects on health outcomes, on mobility, on degree of trust, on social solidarity — all these things,” he said. “We’re not helping ourselves by being so unequal.”

Decreasing inequality is extremely difficult and usually comes about through plague, revolution, mass warfare or state collapse, according to “The Great Leveler,” a new book by Stanford University’s Walter Scheidel. Kohler himself has documented four periods of mounting inequality among the ancient Pueblo people of the American Southwest, with each ending in violence and greater equality. The last one coincided with the complete depopulating of the Mesa Verde area.

“In each case, you see not just this decline in Gini scores, but we also see an increase in violence that accompanies that decline,” Kohler said. “We could be concerned in the United States, that if Ginis get too high, we could be inviting revolution, or we could be inviting state collapse. There’s only a few things that are going to decrease our Ginis dramatically.”

Kohler’s portion of the Nature study was funded by the National Science Foundation. It is in keeping with WSU’s Grand Challenges, a suite of research of research initiatives aimed at large societal issues. It is particularly relevant to the challenge of Opportunity and Equity.