New Light Shed on the Origin of Anti-Matter


A Michigan Tech team and others used a  high-altitude observatory in Mexico to better understand where gamma rays come from.

A mountaintop observatory about four hours east of Mexico City, built and operated by an international team of scientists, has captured the first wide-angle view of gamma rays emanating from two rapidly spinning stars. The High-Altitude Water Cherenkov (HAWC) Gamma-Ray Observatory offers perspective on the very high energy light streaming from our stellar neighbors and casts serious doubt on one possible origin for a mysterious excess of anti-matter particles near Earth.

In 2008, a space-borne detector measured an unexpectedly high number of positrons—the anti-matter cousins of electrons—in orbit. Ever since, scientists have debated the cause of the anomaly, split over two competing theories of its origin. Some suggested a simple explanation: The extra particles might be coming from nearby collapsed stars called pulsars, which spin around several times a second and throw off electrons, positrons and other matter with violent force. Others speculated that the extra positrons have an exotic origin, perhaps coming from as-yet undetected processes involving dark matter—the invisible but pervasive substance seen so far only through its gravitational pull.

“This new measurement is tantalizing because it strongly disfavors the idea that these extra positrons are coming to Earth from two nearby pulsars, at least when you assume a relatively simple model for their propagation,” says Jordan Goodman, professor of physics at the University of Maryland and the lead investigator and US spokesperson for the HAWC collaboration. “Our measurement doesn’t decide the question in favor of dark matter, but any new theory that attempts to explain the excess using pulsars will need to match the new data.”

Using this new data from the HAWC observatory, researchers made the first detailed measurements of two pulsars previously identified as possible sources of the excess. By catching and counting particles of light streaming from these nearby stellar engines, the HAWC collaboration showed that the two pulsars are unlikely to be the origin of the positron excess. Despite being the right age and the right distance from Earth, the pulsars are surrounded by an extended murky cloud from which positrons can’t escape in great numbers, according to results published this week in Science (DOI: 10.1126/science.aan4880).

This image shows the Geminga region of the sky with the moon for scale. The two rapidly spinning stars have been eliminated as a source of gamma rays coming to Earth. 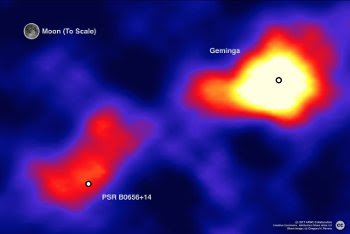 Petra Huentemeyer, associate professor physics at Michigan Technological University and founding member of the HAWC collaboration, started working with her former PhD student, Hao Zhou, on the related analysis of HAWC data while he was a postdoc at Michigan Tech in 2016.

“Our analysis does not support previous claims that the two nearby pulsars are responsible for the excess of positrons detected by two space-born telescopes, the Italian-lead PAMELA project and the AMS-02 detector of NASA,” she says.

Some researchers posit that the positrons are produced in dark matter interactions.

“There are all kinds of efforts all over the globe to detect dark matter directly,” she says. “Dark matter is difficult to detect. Dark matter is elusive. We don’t see it. The reason we think it exists is because if you take what we know about gravitation and then look at the velocity of stars traveling around the center of disk galaxies, they are not traveling at the speeds we expect from visible matter. There must be dark, non-light emitting mass somewhere that causes this from what we understand about gravitation.”

While the results in the Science paper do not affirm the detection of dark matter, they do confirm that positron excess is not explained by a pulsar nebula throwing off the particles.
Looking for Answers

The HAWC Observatory sits at an elevation of 13,500 feet, flanking the Sierra Negra volcano inside Pico de Orizaba National Park in the Mexican state of Puebla. More than 300 massive water tanks sit waiting at the site for cascades of particles initiated by high-energy packets of light called gamma rays—many of which have more than a million times the energy of a dental X-ray.

When these gamma rays smash into the upper atmosphere, they blast apart atoms in the air, producing a shower of particles that moves at nearly the speed of light toward the ground. When this shower reaches HAWC’s tanks, it produces coordinated flashes of blue light in the water, allowing researchers to reconstruct the energy and cosmic origin of the gamma ray that kicked off the cascade.

This measurement wouldn’t have been possible without HAWC’s wide view. It continuously scans about one-third of the sky overhead, which provided researchers with a broad view of the space around the pulsars.

“Thanks to its wide field of view, HAWC provides unique measurements on the very-high-energy gamma-ray profiles caused by the particle diffusion around nearby pulsars, which allows us to determine how fast the particles diffuse more directly than previous measurements,” says Hao Zhou, now a scientist at the Los Alamos National Laboratory in New Mexico and Michigan Tech alumnus.

Zhou, one of the paper’s corresponding authors, is responsible for developing the particle diffusion model and calculating the gamma-ray emission morphology around the two pulsars in HAWC data. He fit this model to the data to constrain the physical parameter about these sources, which describes how fast a particle diffuses away from its source.

Surface brightness of the very high energy gamma-ray emission as a function of distance from the Geminga (A) and its sister pulsar, designated as PSR B0656+14 (B). The solid line represents the best-fitting common diffusion model. The shaded band is the model uncertainty. 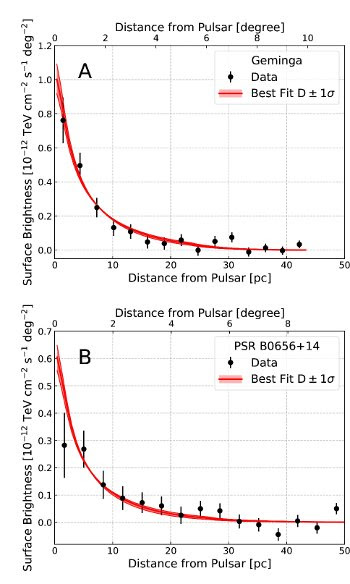 As with an ordinary camera, collecting lots of light allows HAWC to build sharp images of individual gamma-ray sources. The highest energy gamma rays originate in the graveyards of big stars, such as the spinning pulsar remnants of supernovae. But that light doesn’t come from the stars themselves. Instead, it's created when the spinning pulsar accelerates particles to extremely high energies, causing them to smash into lower-energy photons left over from the early universe.

The size of this stellar debris field, measured by the patch of sky that glows bright in gamma rays, tells researchers how quickly matter moves relative to a local astrophysical engine—in this case, the nearby pulsars. This, in turn, enables researchers to estimate how quickly positrons are moving and how many positrons could have reached Earth from a given source. Using the most complete catalog of HAWC data to date, scientists have determined that the nearby pulsar Geminga and its unnamed sister are not sources of the positron excess. Even though the two pulsars are old enough and close enough to account for the excess, matter isn’t drifting away from the pulsars fast enough to have reached the Earth.

Even with the energy's source becoming clearer, Zhou says there are still questions left unanswered.

“There are still questions left before we can draw more concrete conclusions on the origin of positron excess,” he says. “How does the morphology depend on energy? Are there more pulsars like these two in the sky that we have not detected? With more data and dedicated analysis, we will work on answering these questions.”