A team of scientists that used motion-sensing tags to track the movements of more than five dozen blue whales off the California coast discovered that most have a lateralization bias - in other words, they essentially are "right-handed" or "left-handed."

That didn't necessarily surprise the researchers because many animals have a right-side bias, and for good reason. In vertebrates, the left hemisphere of the brain controls coordination, predictive motor control and the ability to plan and coordinate actions - like feeding. And the left side of the brain is linked with the right eye.

However, even the "right-handed" whales become left-handed when it comes to one move, the scientists discovered. When blue whales rise from the depths to approach a krill patch near the surface, they perform 360-degree barrel rolls at a steep angle and nearly always roll to the left - even those that normally are "right-handed," according to Ari Friedlaender, a cetacean expert with the Marine Mammal Institute at Oregon State University who led the study.

A blue whale dives into the water off the California coast. 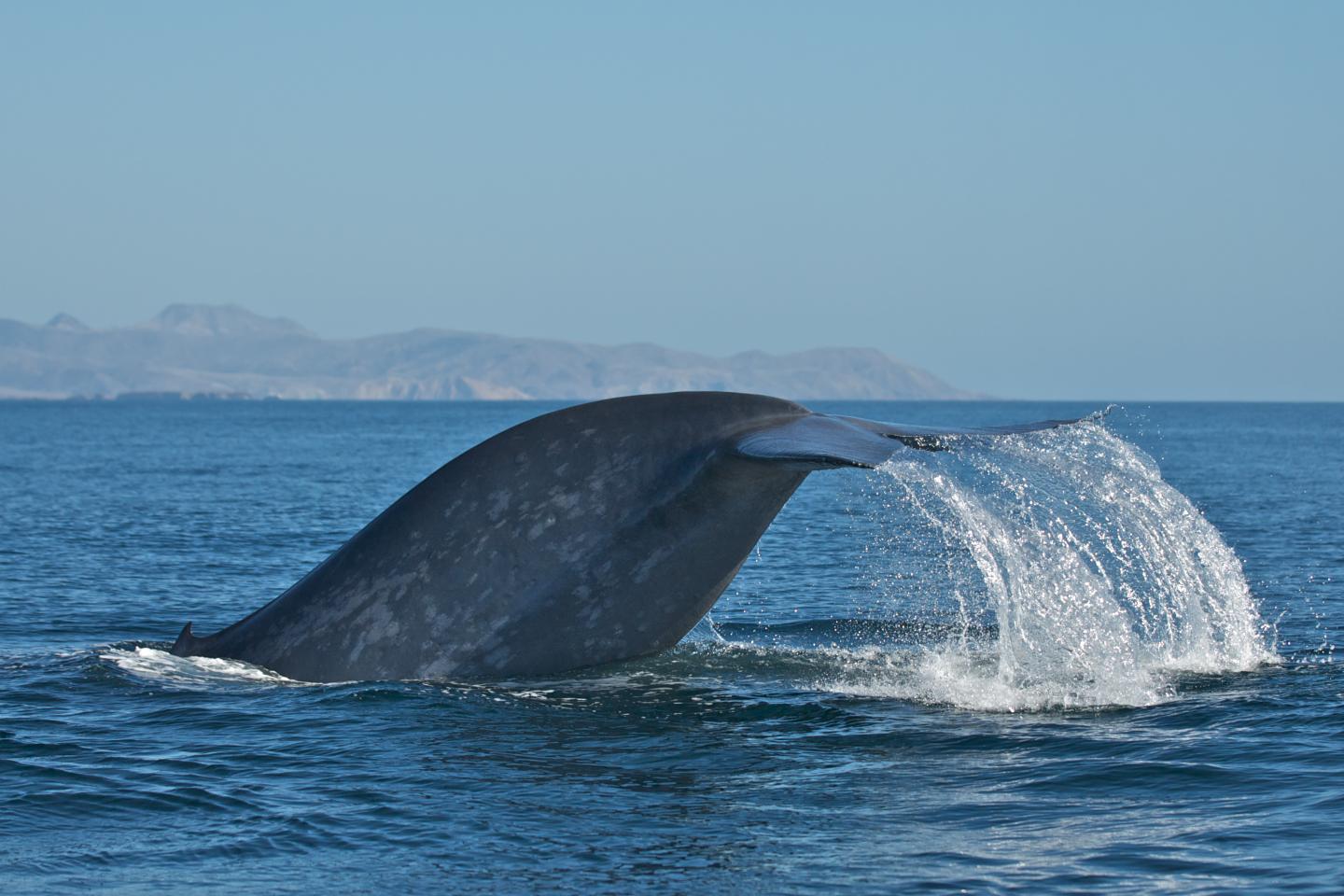 "The patches of prey near the surface, between 10 and 100 feet deep, are usually smaller and less dense than prey patches found deeper and the blue whales showed a bias toward rolling left - presumably so they can keep their right eye on the prey patch and maximize their effort," said Friedlaender, who also is on the faculty of the University of California at Santa Cruz.

"These are the largest animals on the planet and feeding is an extraordinarily costly behavior that takes time, so being able to maximize the benefit of each feeding opportunity is critical. And we believe this left-sided rotation is a mechanism to help achieve that."

Results of the research, which was funded primarily by the U.S. Office of Naval Research, are being published this week in the journal Current Biology.

Blue whales are thought to be the largest animals to have ever lived on Earth, weighing as much as 25 elephants and reaching the length of nearly three school buses. Yet most of their diet is comprised of krill, tiny shrimp-like creatures that they filter through their mouths.

"Most of the movements we tracked that involved 'handedness' - perhaps as much as 90 percent - involved 90-degree side rolls, which is how they feed most of the time," Friedlaender said. "Blue whales approach a patch of krill and turn on their sides. We found many of them exclusively rolled to their right, fewer rolled just to their left, and the rest exhibited a combination.

"This had never been documented in blue whales before, but the left brain/right eye phenomenon is what leads to handedness in humans and tool use among apes. The most curious aspect was how so many of the whales exhibited lateralization to the left when swimming upwards at a steep angle to get prey."

That left lateralization bias is unusual in the animal kingdom, the researchers noted.

"To the best of our knowledge, this is the first example where animals show different lateralized behaviors depending on the context of the task that is being performed," said co-author James Herbert-Read of Stockholm University in Sweden.

The researchers found that the blue whales rarely performed the 360-degree barrel rolls deep in the water column, instead using that move almost exclusively at the surface. They theorize that the reason is that the whales need enough light to see the prey with their dominant right eye, thus they need to be higher in the water column.

"At the surface, a krill patch will show as a nice counter-shade to the surface light," Friedlaender said. "At 200 meters or more, the whales can't see nearly as well."

The research team collected data on more than 2,800 rolling lunges for prey by the 63 whales. The study is important because it provides new three-dimensional data on the movements and feeding behaviors of blue whales captured in their natural environment and provides insights as to how these animals are able to modify their behavior to be successful in an environment where resources are not evenly distributed.