A UK team of researchers has produced high-resolution maps of the bed beneath a major glacier in West Antarctica, which will help them predict future sea-level rise from this region.

Radar surveys of the land beneath Pine Island Glacier have revealed a diverse landscape under the ice with some surprises. The results are published today (20 November 2017) in the journal Nature Communications.

The findings are significant as Pine Island Glacier is the fastest melting glacier in Antarctica and currently accounts for up to 10 per cent of global sea level rise. Ice melting into the ocean in the region is expected to increase as the climate warms and the West Antarctic ice sheet continues to thin. 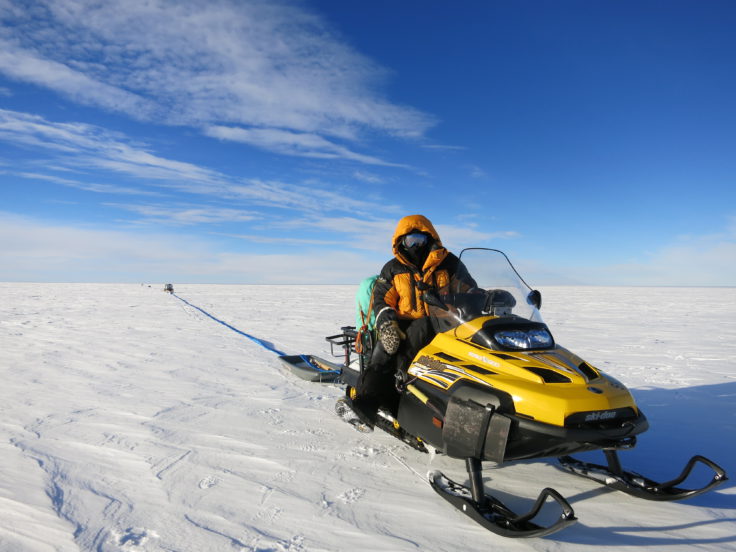 The survey of the glacier, the most detailed to date, was carried out between 2013-2016 as part of the NERC funded iSTAR programme. Snow vehicles equipped with radar sensors surveyed about 1500 sq km of land, taking readings every few hundred metres.


Lead author Dr Robert Bingham, of the University of Edinburgh’s School of GeoSciences, says:
“Detailed understanding of this diverse landscape, and how that will impact on ice melt from one of Antarctica’s most important glaciers, will give us valuable clues as to how warming in this region will impact on global sea level.”

The findings represent significant progress in the data available to inform forecasts of ice loss. Previous computer models used less comprehensive data from aerial radar surveys, which did not account for a range of ice bed shapes and the effects these could have on glacier friction.

Co-author Prof David Vaughan from British Antarctic Survey says: “These maps have revealed new features under Pine Island Glacier that we never thought were there. The bed turns out to be much rougher than we thought. There are mountains and deep scour marks which are clearly going to be influencing the flow and behaviour of the ice. In order to really understand how the glacier is going to respond to future change, we need to understand its interaction with the bed and these high resolution maps let us begin to do this.”

The study shows that the diverse nature of the terrain beneath the glacier is the biggest factor affecting the flow of the ice across the landscape. Scientists will incorporate the new findings into computer models used to project the glacier’s future.

The study was led by the University of Edinburgh in collaboration with the British Antarctic Survey, the Universities of Swansea, Exeter and Aberdeen, and partners in the US and New Zealand. It was funded under the Natural Environment Research Council’s iSTAR programme.

Damon Davies, of the University of Edinburgh’s School of GeoSciences, who took part in the research, says: “Pine Island Glacier is a key contributor to sea level rise, so this major step forward in understanding its dynamics will help improve our predictions of ice melt into the ocean.”

Images of the bed underneath Pine Island Glacier were taken from the UK’s first major overland traverse in West Antarctica in 2013/14 over several months in very cold and hostile conditions. A team of scientists and support staff lived and worked 24 hrs a day to radar key sections across the glacier.