"Groom" Blocking: A Key Social Move in Relationships Among Chimpanzees and Monkeys

What would you call a chimpanzee that interferes with two other chimpanzees who are grooming each other?  And would there be a human analog for that sort of behavior.

Researcher of the Max Planck Institute for Evolutionary Anthropology in Leipzig, Germany, show that wild sooty mangabeys and chimpanzees, both living in complex social groups, monitor the interactions of others and take active steps to prevent friends from defecting and forming new alliances. Bystanders monitor and intervene into grooming interactions of their fellow group members if these threaten their own status or social relationship

Humans do not only form complex and long-lasting social relationships with friends, family, and romantic partners, but also keep track of threats to these relationships and protect them jealously against outsiders.    We also observe changes in the relationships around us and try to prevent alliances that could harm us in the long run.

Chimpanzees grooming each other. 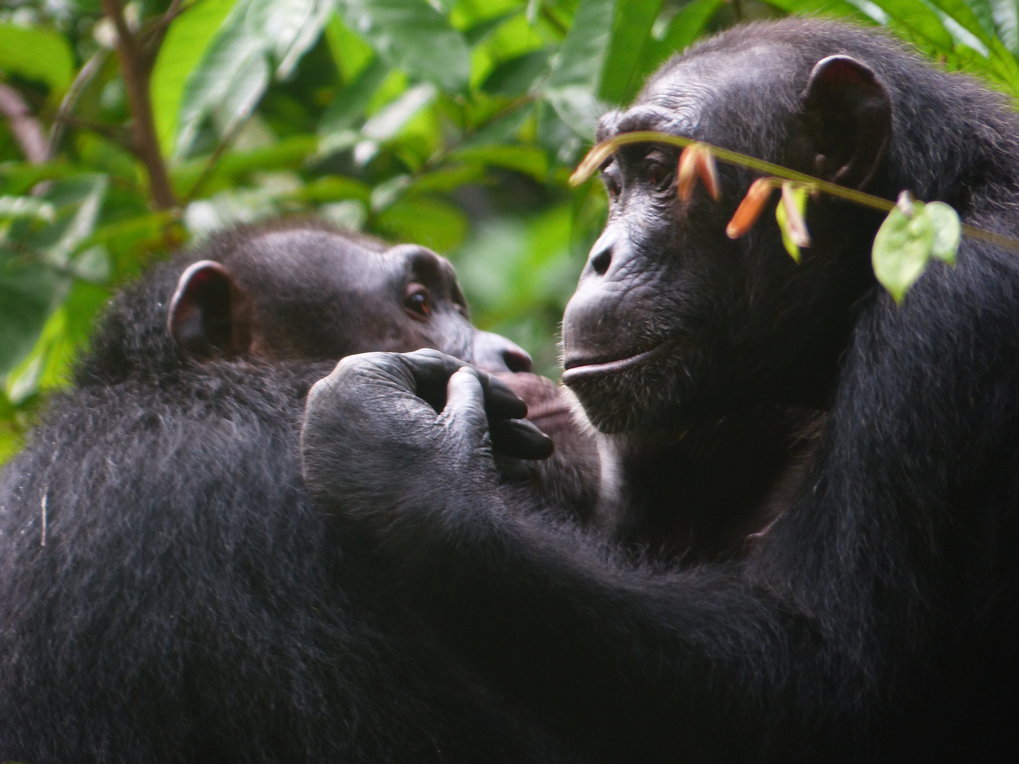 Humans invest large amounts of time and energy in social relationships of different kinds, which can last a lifetime and influence all aspects of our everyday life. However, relationships can be fragile, and friendships and romantic relationships can end, with strong repercussions for everyone involved.

Often, relationships suffer because one friend or partner forms strong relationships with other individuals. Similarly, new alliances in a social group can threaten someone’s social status, for example when the boss starts preferring one co-worker over others. People therefore watch the interactions of others jealously and try to prevent any new relationships from forming if these could harm them.

Like humans, many non-human primates live in close-knit social groups where individuals form strong and long-lasting social relationships with each other that benefit both partners. However, as in humans, these relationships can change over time if one of the partners finds another group member to invest in. Similarly, alliances are used in aggressive interactions and can give individuals an important competitive advantage over others.

Researchers from the Max Planck Institute for Evolutionary Anthropology in Leipzig, Germany, have investigated the ability to monitor and influence relationships in wild chimpanzees and sooty mangabeys in Taï National Park, Côte d’Ivoire, by studying who intervenes into grooming interactions in these two species.

Chimpanzees flexibly form friendships and alliances with non-kin group members, and alliances have a strong impact on the outcome of aggressions, while sooty mangabeys live in a society that is influenced by kinship ties, and alliances only play a limited role in aggressions. Grooming is used to establish social relationships and alliances in both species, but bystanders can decide to interrupt or join grooming bouts and thereby change their outcome.

Collecting grooming interactions in both species over multiple years, and testing who intervened, whom they tried to get access to, and how successful they were, Alexander Mielke and colleagues tried to distinguish whether interventions only exist as a way to gain access to preferred partners, or whether they were specifically used to impede bond and alliance formation that could harm the bystander. Data were collected on two chimpanzee communities and one mangabey community within the context of the Taï Chimpanzee Project.

In contrast to previous studies, the researchers did not only collect information about every grooming bout, but also about all the bystanders that observed it and who intervened or not. For every intervention, the target of the intervener’s attention and the outcome were recorded. Data collected by researchers and field assistants over multiple years were used to determine the social relationships and ranks of all groomers and bystanders.

The researchers then assessed the impact of the social relationships between groomers and bystanders, of the rank relationships of all involved individuals, and the relationship between the groomers themselves on who intervened and how successful they were.

Sooty mangabeys also pay attention to who grooms whom. 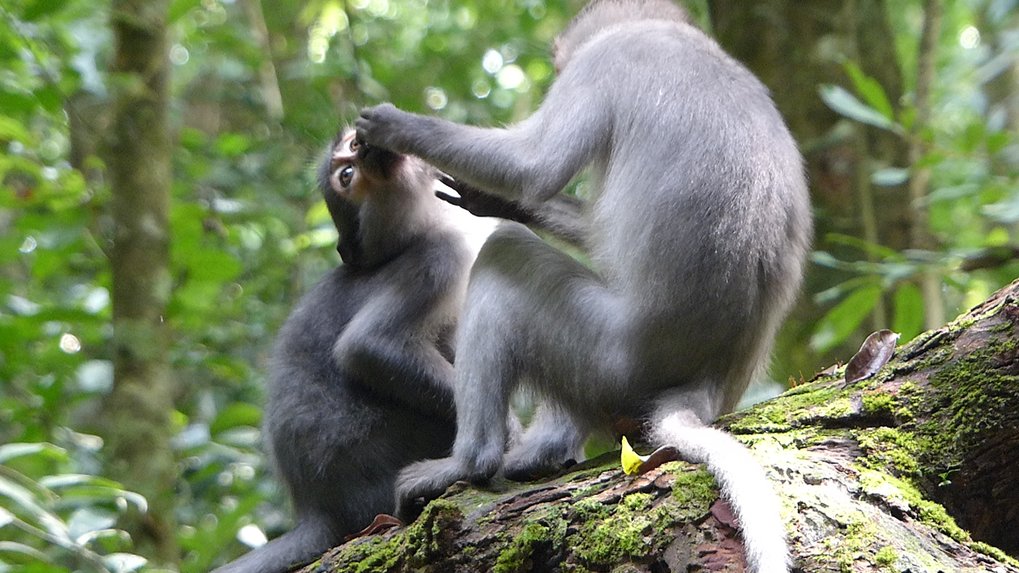 “We found that in both species, bystanders are often very specific in their interventions, targeting grooming interactions of their friends, of individuals that are close to them in rank and groom someone high-ranking, and of dyads that do not yet have a strong relationship with each other”, says Mielke, first author of the study. This indicates that they try to stop relationships and alliances from forming if these could negatively impact them.

The main difference between the species was that mangabeys were not able to tolerate having more than two individuals groom at the same time, so interventions were mostly used by high-ranking individuals who could interrupt others. In chimpanzees, grooming between multiple group members is common, and high-ranking interveners are not as successful in separating the previous groomers.

“However, the patterns we find show that bystanders in both species monitor grooming interactions between their group members and intervene when their friends or close-ranked competitors form new relationships that could harm the bystander in the long run”, adds Mielke.

Can monkeys and apes be jealous?

These results are especially interesting as they show that primates are not only aware of others’ ranks and relationships, but they use this knowledge to actively impact the social life of their group members and friends. This increases the complexity of the social environment in these groups, because rather than just leading isolated lives, monkeys and apes make decisions that have repercussions on the whole social network they are embedded in, much like humans do.

These results also open questions about the emotional life of non-human primates: in humans, relationship protection is accompanied by feelings of jealousy that motivate individuals to intervene into their friends’ and partner’s social life. Further studies will have to show if similar feeling are already apparent in other primate species.