The detection of gravitational waves has given astronomers a new way of looking at the universe, and a new study shows how these ripples in the fabric of spacetime might confirm or rule out the existence of a certain type of black hole.

A new study published in Physical Review Letters outlines how scientists could use gravitational wave experiments to test the existence of primordial black holes, gravity wells formed just moments after the Big Bang that some scientists have posited could be an explanation for dark matter.

“We know very well that black holes can be formed by the collapse of large stars, or as we have seen recently, the merger of two neutron stars,” said Savvas Koushiappas, an associate professor of physics at Brown University and coauthor of the study with Avi Loeb from Harvard University. “But it’s been hypothesized that there could be black holes that formed in the very early universe before stars existed at all. That’s what we’re addressing with this work.”

The LIGO experiment has made several detections of colliding black holes. Future gravitational wave experiments might detect such events much further back in time, which could shed light on how black holes form. 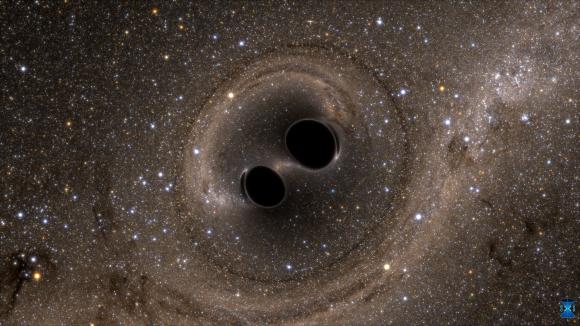 
The idea is that shortly after the Big Bang, quantum mechanical fluctuations led to the density distribution of matter that we observe today in the expanding universe. It’s been suggested that some of those density fluctuations might have been large enough to result in black holes peppered throughout the universe. These so-called primordial black holes were first proposed in the early 1970s by Stephen Hawking and collaborators but have never been detected — it’s still not clear if they exist at all.

The ability to detect gravitational waves, as demonstrated recently by the Laser Interferometer Gravitational-Wave Observatory (LIGO), has the potential to shed new light on the issue. Such experiments detect ripples in the fabric of spacetime associated with giant astronomical events like the collision of two black holes. LIGO has already detected several black hole mergers, and future experiments will be able to detect events that happened much further back in time.

“The idea is very simple,” Koushiappas said. “With future gravitational wave experiments, we’ll be able to look back to a time before the formation of the first stars. So if we see black hole merger events before stars existed, then we’ll know that those black holes are not of stellar origin.”

Cosmologists measure how far back in time an event occurred using redshift — the stretching of the wavelength of light associated with the expansion of the universe. Events further back in time are associated with larger redshifts. For this study, Koushiappas and Loeb calculated the redshift at which black hole mergers should no longer be detected assuming only stellar origin.

They show that at a redshift of 40, which equates to about 65 million years after the Big Bang, merger events should be detected at a rate of no more than one per year, assuming stellar origin. At redshifts greater than 40, events should disappear altogether.

“That’s really the drop-dead point,” Koushiappas said. “In reality, we expect merger events to stop well before that point, but a redshift of 40 or so is the absolute hardest bound or cutoff point.”

A redshift of 40 should be within reach of several proposed gravitational wave experiments. And if they detect merger events beyond that, it means one of two things, Koushiappas and Loeb say: Either primordial black holes exist, or the early universe evolved in a way that’s very different from the standard cosmological model. Either would be very important discoveries, the researchers say.

“Evidence for non-Gaussianity would require new physics to explain the origin of these fluctuations, which would be a big deal,” Loeb said.