Who is she, this little mummy girl? Northwestern University scientists and students are working to unravel some of her mysteries, including how her body was prepared 1,900 years ago in Egypt, what items she may have been buried with, the quality of her bones and what material is present in her brain cavity.

As part of a comprehensive scientific investigation, the mummy traveled from Evanston to Argonne National Laboratory on Nov. 27 for an all-day X-ray scattering experiment. It was the first study of its kind performed on a human mummy.

"This is a unique experiment, a 3-D puzzle," said Stuart R. Stock, research professor of cell and molecular biology at Northwestern University Feinberg School of Medicine, who led the synchrotron experiment. "We have some preliminary findings about the various materials, but it will take days before we tighten down the precise answers to our questions. We have confirmed that the shards in the brain cavity are likely solidified pitch, not a crystalline material." 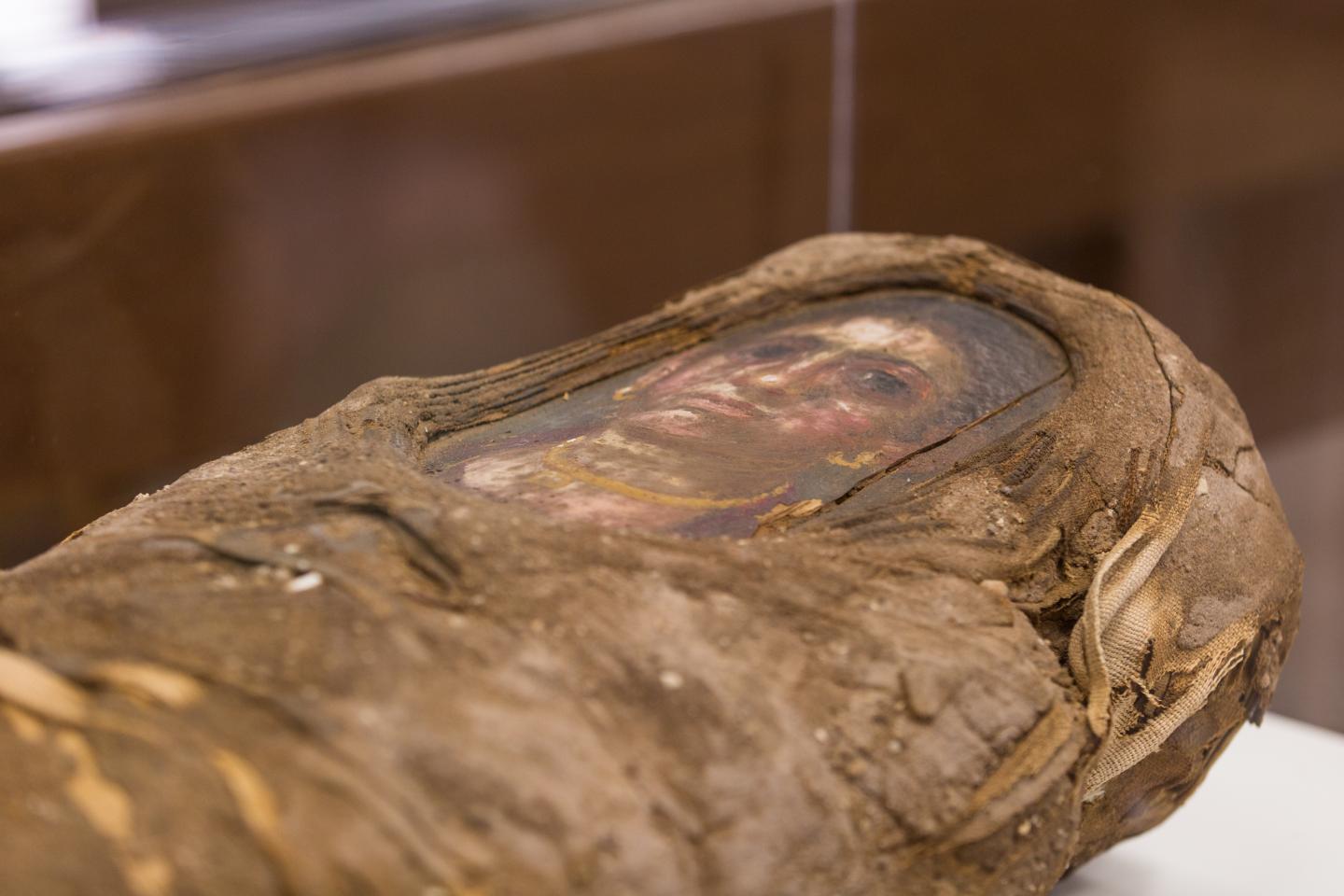 
The Roman-Egyptian mummy -- which resides at the Garrett-Evangelical Theological Seminary on Northwestern's Evanston campus -- is one of only approximately 100 portrait mummies in the world. These mummies have an extremely lifelike painting of the deceased individual incorporated into the mummy wrappings and placed directly over the person's face. The Romans introduced to Egypt these 2-D portraits of the dead after almost 3,000 years of idealized 3-D images. (Think King Tut).

Just over three feet long, the little girl's body is swaddled in a copious amount of linen. The outermost wrappings have been arranged in an ornate geometric pattern of overlapping rhomboids and also serve to frame the portrait. The face, painted with beeswax and pigment, gazes serenely outward, her dark hair gathered at the back. She is wearing a crimson tunic and gold jewelry.

The study of this rare archeological object, owned by Garrett-Evangelical, is part of an interdisciplinary class at Northwestern focused, in part, on filling out the contextual story of where this mummy came from and who she was.

Thirteen materials science and humanities students are examining the materials and methods used to create both this intact portrait mummy and a well-preserved collection of Roman-Egyptian mummy portraits for an upcoming exhibition at Northwestern's Block Museum of Art. Earlier in the quarter, the class traveled to California to study the portraits at the Phoebe A. Hearst Museum of Anthropology at the University of California, Berkeley, which will loan the portraits to the Block Museum. (Unlike the Garrett mummy, each of these portraits has been separated from its mummy.)

The students already have discovered that the Garrett mummy's portrait was put together in a very different way from the Hearst Museum portraits and likely is from a different workshop. These findings and others yet to come, including results from the synchrotron X-ray study of the Garrett mummy, will culminate in the Block Museum exhibition, "Paint the Eyes Softer: Mummy Portraits from Roman Egypt." 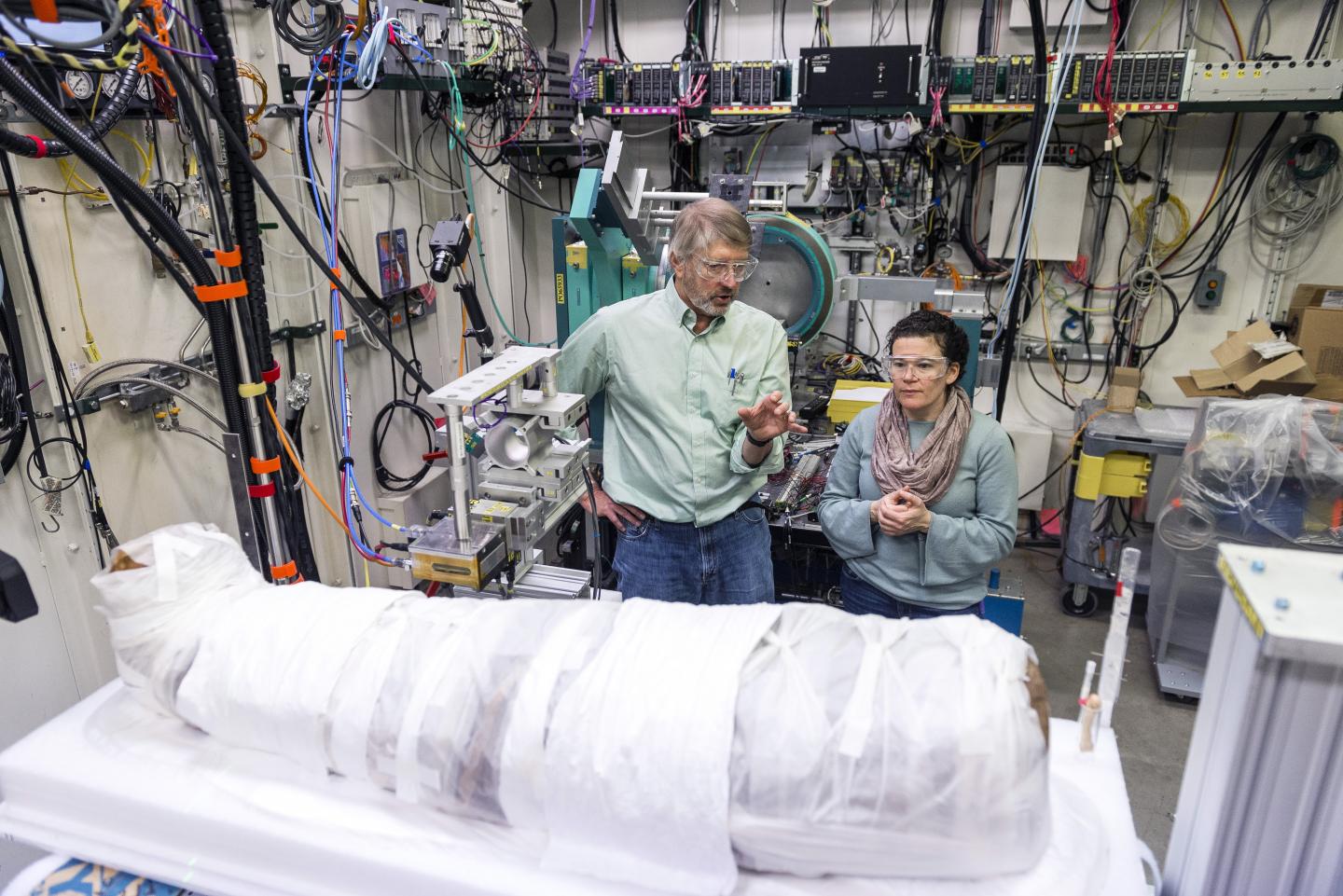 "Intact portrait mummies are exceedingly rare, and to have one here on campus was revelatory for the class and exhibition," said Marc Walton, a research professor of materials science and engineering at Northwestern's McCormick School of Engineering. He is teaching the fall quarter class with Taco Terpstra, assistant professor of classics and history at the Weinberg College of Arts and Sciences.

The "Paint the Eyes Softer" exhibition will reunite ancient neighbors: the girl portrait mummy is from the site of Hawara, a site close to Tebtunis, where the Hearst Museum's mummy portraits are originally from. The Hawara, or Garrett, mummy is believed to be from a high-status family and was entombed in an underground chamber with four other mummies.

"This is a once-in-a-lifetime opportunity for our undergraduate students -- and for me -- to work at understanding the whole object that is this girl mummy," Walton said. "Today's powerful analytical tools allow us to nondestructively do the archaeology scientists couldn't do 100 years ago."

The synchrotron experiment at Argonne is a modern-day version of 19th-century England's "mummy unwrapping" parties, Walton said. The Northwestern team collaborated with scientists at Argonne and used the extremely brilliant high-energy synchrotron X-rays produced by Argonne's Advanced Photon Source to probe the materials and objects inside the mummy, while leaving the mummy and her wrappings intact.

"From a medical research perspective, I am interested in what we can learn about her bone tissue," Stock said. "We also are investigating a scarab-shaped object, her teeth and what look like wires near the mummy's head and feet."

Prior to its trip to Argonne, the mummy had a CT scan at Northwestern Memorial Hospital in August, also led by Stock. The scan gave the researchers a 3-D map of the structure of the mummy and enabled them to confirm the girl is 5 years old (give or take nine months). 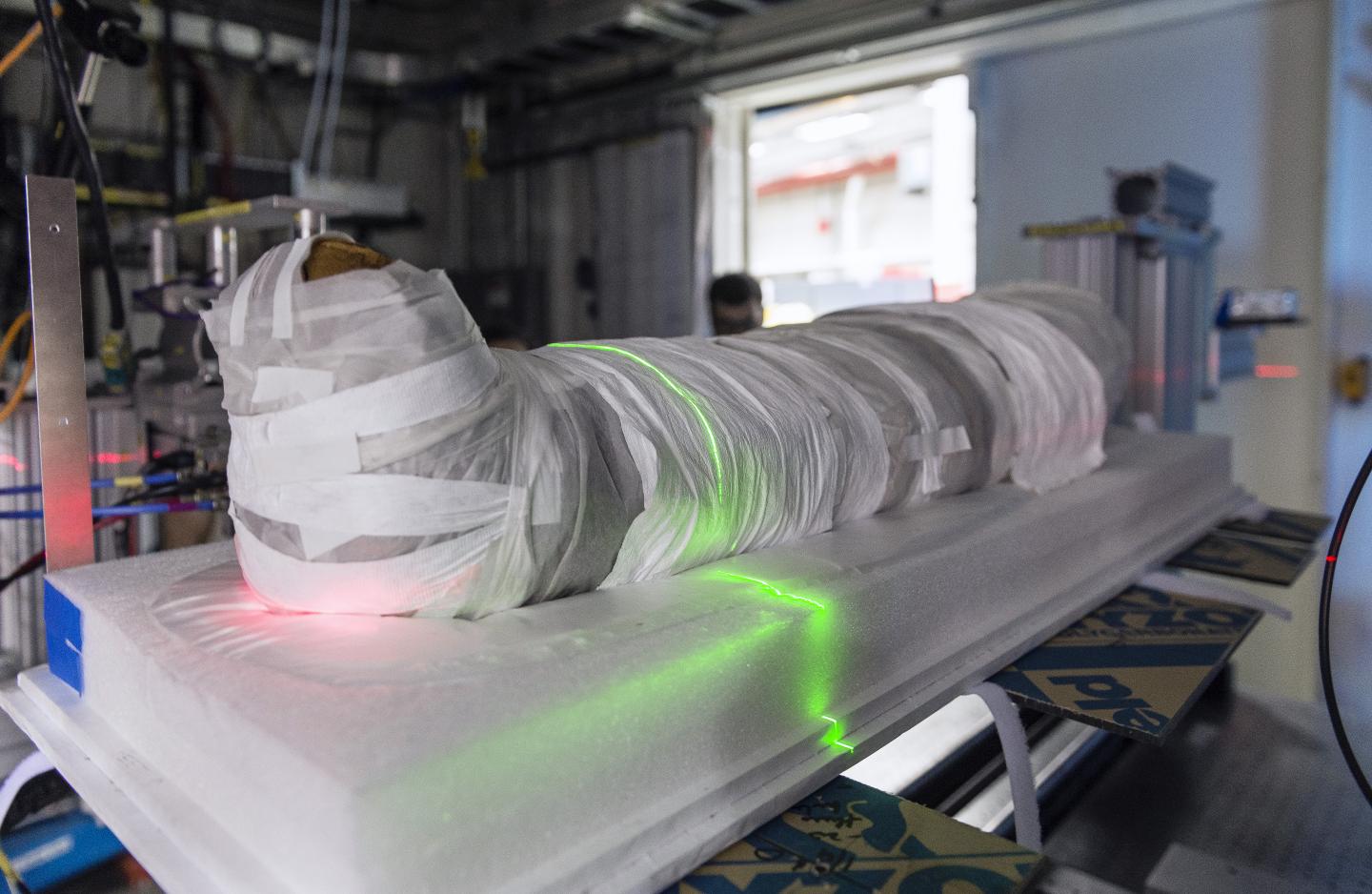 
At the Advanced Photon Source, Stock and his team shined the pencil-shaped X-ray beam (about twice the diameter of a human hair) on areas of high-density in the mummy that were identified by the CT scan. They now will use the X-ray diffraction patterns as "fingerprints" to identify each crystalline material. For example, is the black rounded object seen on the CT scan a gold object or a rock?

The findings from the synchrotron experiment, CT scan and other scientific analyses and studies of history conducted by the students will help researchers and historians better understand the context in which the Garrett mummy was excavated in 1911 as well as Roman-period mummification practices. Also, conservators will use the information to best preserve the mummy.

"We're basically able to go back to an excavation that happened more than 100 years ago and reconstruct it with our contemporary analysis techniques," Walton said. "All the information we find will help us enrich the entire historic context of this young girl mummy and the Roman period in Egypt."