Dogs May Have a Functional Understanding of Emotional Information

Animal behaviour researchers in the UK and Brazil have found that dogs lick their mouths as a response to angry human faces, according to new study.

Scientists examined the behaviour of dogs in response to emotionally significant images and sounds, and found that mouth licking in domestic dogs is not simply a response to food or uncertainty, but appears to be used as a signal to try to communicate with humans in response to visual cues of anger.

Significantly, audio cues of angry human voices did not elicit the same response.

Pictured is a dog in the experiment licking its lips when the image of an angry human is shown, suggest that dogs may have a functional understanding of emotional information. 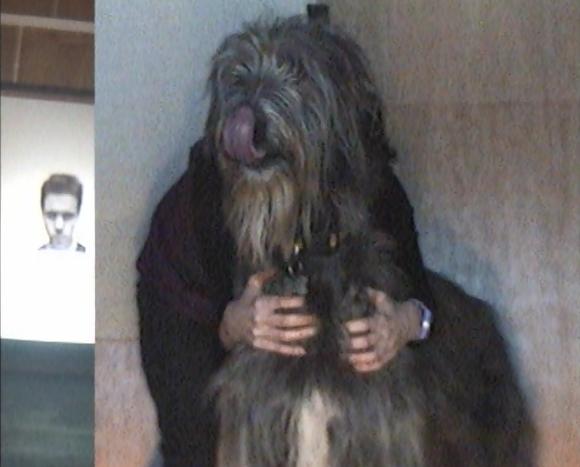 The findings, published in the scientific journal Behavioural Processes, shine new light on our understanding of the emotional world of dogs.
The research was conducted by researchers from the University of Sao Paulo, Brazil, and the University of Lincoln, UK.

This video shows a dog licking its lips when the image of an angry female human is shown, suggest that dogs may have a functional understanding of emotional information.

Lead author Natalia Albuquerque from the University of Sao Paulo, said: "Mouth-licking was triggered by visual cues only (facial expressions). There was also a species effect, with dogs mouth-licking more often when looking at humans than at other dogs. Most importantly, the findings indicate that this behaviour is linked to the animals' perception of negative emotions."

Co-author Professor Daniel Mills of the School of Life Sciences at the University of Lincoln, said: "Humans are known to be very visual in both intra and inter-specific interactions, and because the vision of dogs is much poorer than humans, we often tend to think of them using their other senses to make sense of the world. But these results indicate that dogs may be using the visual display of mouth-licking to facilitate dog-human communication in particular."